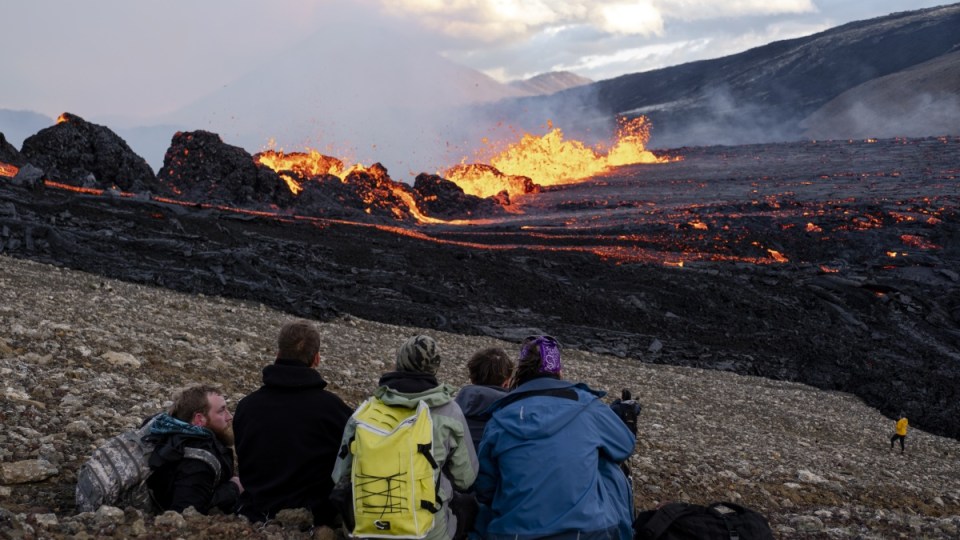 The eruption has drawn plenty of onlookers – although they have been urged to stay away due to volcanic gases. Photo: Getty

Glowing red lava is still flowing after a volcanic eruption on Iceland’s Reykjanes peninsula, about 30 kilometres south-west of the capital Reykjavik, a “relatively small” one according to the country’s government.

According to initial measurements, the eruption was much more powerful in the early hours than at the beginning of a similar one in 2021.

A series of earthquakes that heralded the eruption also continued: On Thursday morning, a quake with a magnitude of 4.6 was measured on the peninsula, according to data from the Icelandic Meteorological Authority.

The number of tremors, however, has decreased noticeably since the eruption, according to the authority.

The eruption started on Wednesday afternoon near the mountain Fagradalsfjall.

Scientists expected one due to earthquakes and associated underground magma movements.

There is no major danger to people or the surrounding area, according to findings so far.

“We’ve been expecting an eruption somewhere in this area since the series of earthquakes started last weekend,” she said.

“What we know so far is that the eruption does not pose any risk to populated areas or critical infrastructure.”

It is still unclear how long the eruption will last.

This time, too, curious onlookers have made their way to the eruption site, with media reports speaking of thousands of people.

A helicopter pilot told broadcaster RUV that the number of requests for helicopter tours had skyrocketed.

The airspace over the volcano remains closed, however.

The government also advised hikers to stay of the area due to gases from the eruption.

Iceland’s chief police officer Vídir Reynisson, in comments to RUV, said that the kilometre-long route to the eruption site was suitable only for experienced hikers.

The area is relatively sparsely populated but is home to the country’s most important airport. It handles almost all air traffic to and from the island.

According to the government, operations have not been affected by the eruption so far.