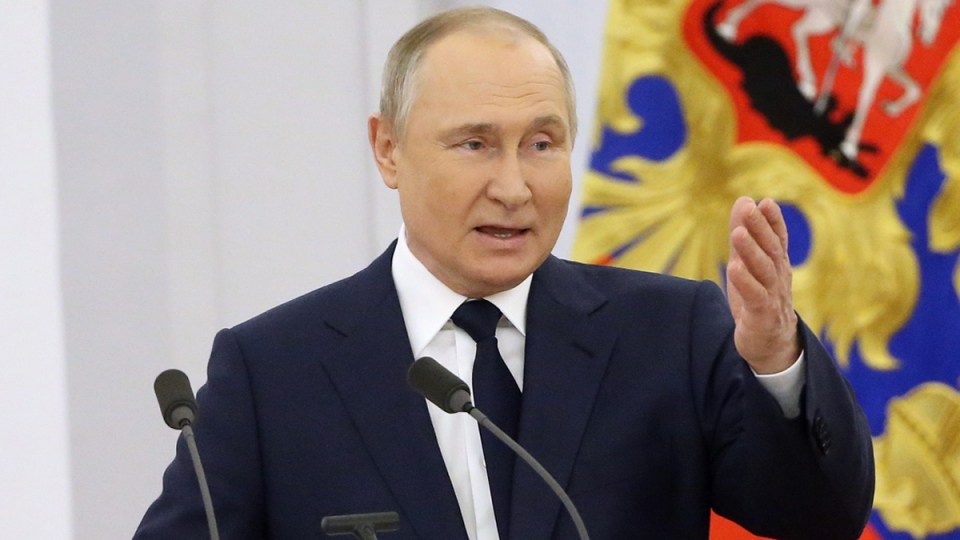 Russian President Vladimir Putin has challenged the West over the ongoing conflict in Ukraine. Photo: Getty

Russia has barely got started in Ukraine, President Vladimir Putin says, daring the West to try to defeat it on the battlefield while insisting Moscow remains open to the idea of peace talks.

In a hawkish speech to parliamentary leaders more than four months into the war, Mr Putin said chances for negotiation would grow dimmer the longer the conflict dragged on.

“Today we hear that they want to defeat us on the battlefield. What can you say, let them try,” he said.

“We have heard many times that the West wants to fight us to the last Ukrainian. This is a tragedy for the Ukrainian people, but it seems that everything is heading towards this.”

Russia accuses the West of waging a proxy war against it by hammering its economy with sanctions and stepping up the supply of advanced weapons to Ukraine.

But while boasting that Russia was just getting into its stride, Putin also referred to the possibility of negotiations.

“Everyone should know that, by and large, we haven’t started anything yet in earnest,” he said.

“At the same time, we don’t reject peace talks. But those who reject them should know that the further it goes, the harder it will be for them to negotiate with us.”

It was the first reference to diplomacy in many weeks after repeated statements from Moscow that negotiations with Kyiv had totally broken down.

Since invading Ukraine on February 24, Russian forces have captured large swathes of the country, including completing the seizure of the eastern region of Luhansk last Sunday.

But their progress has been far slower than many analysts predicted, and they were beaten back in initial attempts to take the capital Kyiv, and second city Kharkiv.

Prospects for compromise appear remote as Ukraine, emboldened by Western support and the heavy losses it has inflicted on its opponent in terms of manpower and equipment, has spoken of driving Russia out of all the territory it has seized.

“There is no ‘collective West’ plan. Only a specific z-army which entered sovereign Ukraine, shelling cities and killing civilians,” Mr Podolyak tweeted.

“Everything else is a primitive propaganda. That’s why Mr.Putin’s mantra of the ‘war to the last Ukrainian’ is yet another proof of deliberate Russian genocide.”

Mr Putin said it was obvious Western sanctions were creating difficulties, “but not at all what the initiators of the economic blitzkrieg against Russia were counting on”.

Parliamentary leaders responded to Mr Putin’s comments and one, Sergei Mironov of the A Just Russia party, encouraged him to set up a special agency to facilitate the integration of occupied Ukrainian territories into Russia – an idea Mr Putin promised to discuss.