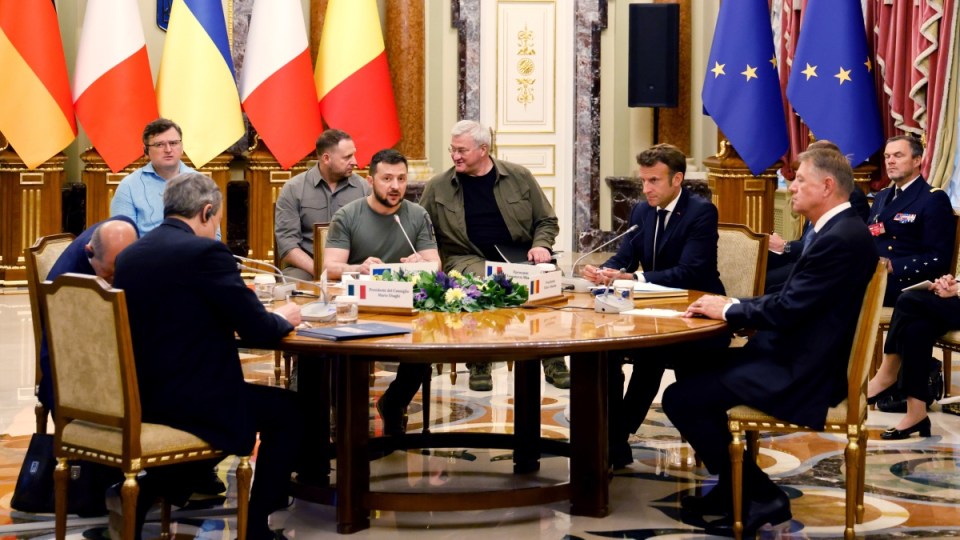 The leaders of France, Germany, Italy and Romania have met Ukrainian President Volodymyr Zelenskiy in a show of support which Kyiv hopes will be followed by more weapons and tougher action to help in the war with Russia.

In the first such visit to the capital since Russia unleashed its invasion, France’s Emmanuel Macron, Germany’s Olaf Scholz, Italy’s Mario Draghi and Romania’s Klaus Iohannis, shook hands with Zelenskiy, who has not left Ukraine since war began.

The meeting on Thursday came after the four European leaders had walked around ruined buildings and wrecked cars in the nearby town of Irpin, the scene of heavy fighting early in the invasion.

The tour was designed to highlight what Ukraine and its backers say were large-scale atrocities committed by Russian troops, what Scholz described as the scene of “unimaginable cruelty” and “senseless violence”.

Standing by gutted, burnt-out buildings, the leaders looked stern as they listened to a Ukrainian minister explaining what had happened there.

They were shown the wreckage of a car which Ukraine says was targeted by Russian troops when a mother and children were inside. Russia denies allegations that its forces committed atrocities.

“It’s a heroic city … marked by the stigma of barbarism,” Macron told reporters.

The leaders, dressed in suits but not wearing any visible protective equipment, were surrounded by heavily armed soldiers.

Emmanuel Macron, Olaf Scholz, Mario Draghi and Klaus Iohannis visited Irpin, a suburb of Kyiv situated to its West that was destroyed during the Russian invasion of the region

Kyiv has accused France, Germany and, to a lesser extent, Italy, of foot-dragging in their support for Ukraine, saying they have been slow to deliver weapons and have put their own prosperity ahead of Ukraine’s freedom and security.

Asked about that criticism, Macron pointed to arms deliveries and financial support.

“France and Europe have been standing by Ukraine and its population since the beginning,” he said.

Ukraine’s bid to join the 27-nation European Union, and its demand for more weapons to fight off Russia, are expected to be two main themes of the EU leaders’ talks with Zelenskiy, who did not accompany them to Irpin.

Shown a slogan on a wall of a damaged building in Irpin that said “Make Europe not war,” Macron said: “It’s very moving to see that. This is the right message.”

After the leaders spoke to Irpin’s mayor and other officials, Draghi added: “Much of what they talked about was reconstruction. Words of pain, of hope, but also of what they want to do in the future.”

The Kremlin said the leaders should use their time with Zelenskiy to take a “realistic look at the state of affairs” rather than discussing more arms shipments to Kyiv.

Dmitry Medvedev, deputy head of Russia’s Security Council, mocked the visit as having “zero use” and having “promised EU membership and old howitzers to Ukraine”.