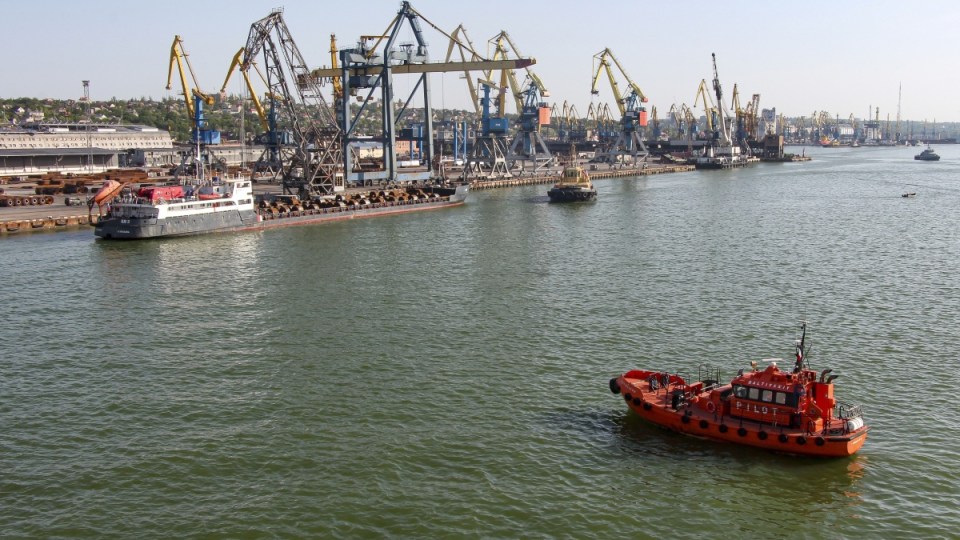 Russia says the de-mining of Mariupol's port has been completed and it is functioning normally. Photo: AP

Russia says two major Ukrainian ports on the Sea of Azov seized by Russian forces are ready to resume grain shipments, but Kyiv still needed to de-mine the approaches to its ports for exports to take place.

Russia has seized large parts of Ukraine’s coast in nearly 15 weeks of war and its warships control the Black and Azov Seas, blocking Ukraine’s farm exports and driving up the price of grain.

Ukraine and the West accuse Moscow of weaponising food supplies. Russia blames the situation on what it says are Ukrainian mines, and international sanctions.

Defence Minister Sergei Shoigu said the ports of Berdyansk and Mariupol, the latter city destroyed after a three-month Russian siege, had resumed their operations.

“The de-mining of Mariupol’s port has been completed. It is functioning normally, and has received its first cargo ships,” Shoigu said in televised comments.

The Sea of Azov is shallower than the Black Sea and its ports are only accessible to smaller vessels. Ukraine’s main port of Odesa remains blocked.

More than 20 million tonnes of grain are stuck in Ukraine awaiting shipment, and Ukrainian President Volodymyr Zelenskiy said this could rise to 75 million by the autumn.

Russia destroyed the second biggest grain terminal in Ukraine. Millions across the globe will face more food insecurity. Russia’s appetite is growing. Now they want not only to eliminate Ukrainians but to put the world on the verge of famine. Helping Ukraine will help avoid this.

“This will allow ships, once checked by our military to make sure they are not carrying any weapons, to enter the ports, load grain and with our help, proceed to international waters,” he said.

The United Nations is working with Kyiv and Moscow on plans to restart grain exports from Ukrainian ports, with Turkey possibly set to provide naval escorts to ensure safe passage out of the Black Sea.

Creating a so-called “land corridor” between Russia and the Crimean peninsula, annexed by Moscow in 2014, has been a major part of Russia’s strategy since the start of its offensive.

Ukraine will not cede any territory

Ukrainian President Volodymyr Zelenskiy says Kyiv will not settle for a battlefield stalemate with Russia and that it aims to regain control of all its territory occupied by Moscow.

“We have already lost too many people to simply cede our territory,” he said by video link at an event hosted by FT Live, in which he added that a stalemate was “not an option” for Kyiv.

“We have to achieve a full deoccupation of our entire territory,” Zelenskiy said.

Kyiv has previously said that Russian forces now occupy about 20 per cent of Ukrainian territory, including swathes of its east and south.

“We are not going to humiliate anyone, we are going to respond in kind,” Zelenskiy said, when asked about French President Emmanuel Macron’s call not to “humiliate” Russia in order to keep the door open to a diplomatic solution.

Ukraine hopes that Western deliveries of longer-range weaponry, including US HIMARS and Britain’s M270 artillery rocket systems, could help to push Russian troops back.