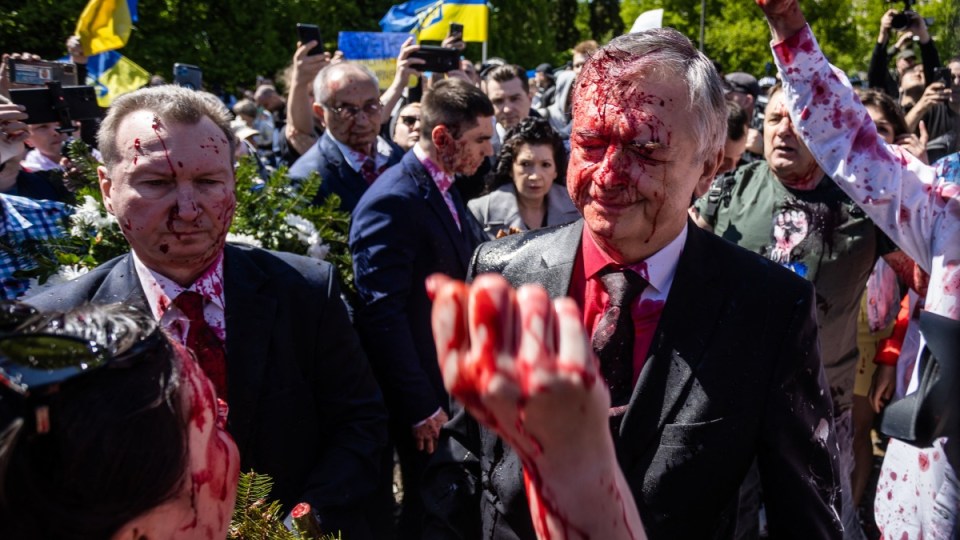 President Volodymyr Zelenskiy has told Ukrainians they will triumph against the Russian invasion. Photo: Getty

The Russian ambassador to Poland has been hit by red paint thrown by protesters.

Sergey Andreev was ambushed by activists as he arrived at the Soviet soldiers cemetery in Warsaw to honour Red Army troops who died during World War II.

Video footage showed paint being thrown from behind Mr Andreev before a protester beside him hurled a big blob of it in his face.

The protesters prevented the ambassador and other members of a Russian delegation from laying flowers.

They carried Ukrainian flags and chanted “fascist” at Mr Andreev, while some were dressed in white sheets smeared with blood, symbolising Ukrainian victims of Russia’s war.

Other men in Mr Andreev’s entourage were also seen splattered with what appeared to be red paint.

Police arrived at the scene to help the ambassador and other members of his delegation get away.

Earlier, Russian President Vladimir Putin  exhorted Russians to battle in a defiant Victory Day speech but was silent about plans for any escalation in Ukraine despite foreign warnings he might use his Red Square address to order a national mobilisation.

In Ukraine, there was no let-up in fighting, with officials in Kyiv describing a stepped-up Russian offensive in the east and a renewed push to defeat the last Ukrainian troops holding out in a steelworks in ruined Mariupol.

Monday’s annual parade in Moscow – with the usual ballistic missiles and tanks rumbling across the cobblestones – was easily the most closely watched since the 1945 defeat of the Nazis that it celebrates.

Officials in the US and European capitals had openly speculated for weeks that Mr Putin was driving his forces to achieve enough progress by the symbolic date to declare victory – but with few gains so far, might instead announce a national call-up for war.

He did neither but repeated his assertions that Russian forces were again fighting Nazis.

“You are fighting for the Motherland, for its future, so that no one forgets the lessons of World War II. So that there is no place in the world for executioners, castigators and Nazis,” Mr Putin said from the tribune outside the Kremlin walls.

Ukraine’s President Volodymyr Zelensky, in his own speech, promised Ukrainians they would triumph.

“On the Day of Victory over Nazism, we are fighting for a new victory. The road to it is difficult but we have no doubt that we will win,” said Mr Zelensky, in plain army garb with his shirt sleeves rolled up.

In a clear reference to Mr Putin, Mr Zelensky added: “The one who is repeating the horrific crimes of Hitler’s regime today, following Nazi philosophy, copying everything they did – he is doomed.”

Russia has little to show for it beyond a strip of territory in the south and marginal gains in the east.

Sheltering in a metro station in Kharkiv, Ukraine’s mainly Russian-speaking second city which has been bombed relentlessly since the war’s first days, WWII survivor Vira Mykhailivna, 90, buried her tear-stained cheeks in her palms.

“I didn’t think this could ever happen to us,” she said.

“This day was once a great celebration.”

The Soviet victory in WWII has acquired almost religious status in Russia under Mr Putin, who has invoked the memory of the “Great Patriotic War” throughout what he calls a “special military operation” in Ukraine.

“There can be no victory day, only dishonour and surely defeat in Ukraine,” UK Defence Secretary Ben Wallace said.

Serhiy Haidai, governor of Ukraine’s frontline Luhansk province, said rescuers were trying to begin sifting through the site of a school in the town of Bilohorivka after a Russian attack believed to have killed 60 people there on Sunday.

Ukrainian forces were holding firm at the towns of Rubizhne and Popasna, major targets of Russia’s advance, he said.

On the main eastern front, Ukraine’s military command said in its nightly Facebook briefing that Russian forces were continuing attempts to take control of Rubizhne to create favourable conditions for a further assault on the towns of Lyman and Sievierodonetsk.

“The TV and the authorities are lying. No to war,” the messages said.