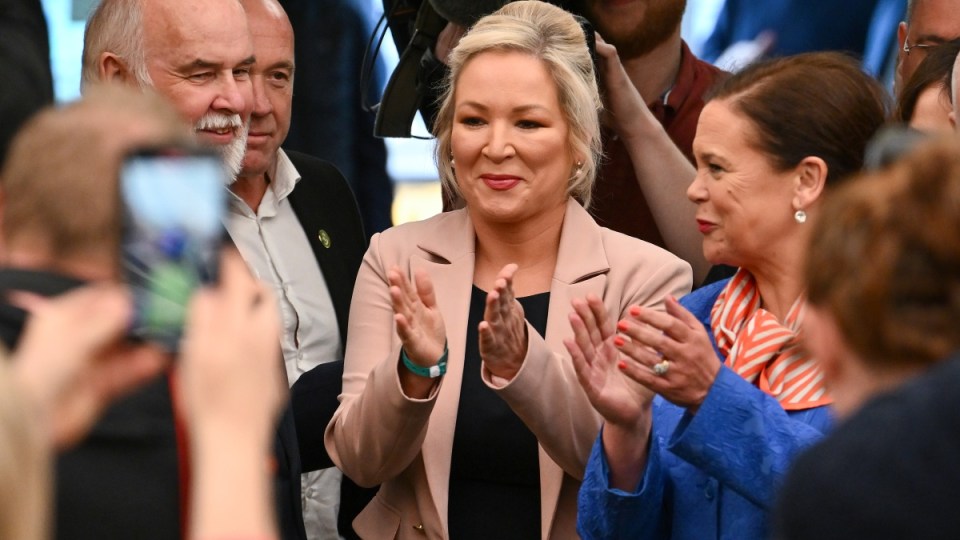 Amanda Ferguson and Clodagh Kilcoyne
8:30am, May 9

Irish nationalists in Belfast have toasted Sinn Fein’s historic election victory while pro-British neighbours quietly fumed, but there was little sign the weekend’s political earthquake was about to rock this once-troubled city.

In a victory that would have been unimaginable a few decades ago, the former political wing of the Irish Republican Army on Saturday became the first Irish nationalist party to take top spot in elections for the British-run region’s parliament.

The win gives Sinn Fein the right to nominate its leader Michelle O’Neill as the region’s first Catholic First Minister – and more power to pursue the party’s ultimate objective of uniting Northern Ireland with the Republic of Ireland to the south.

But few of the people enjoying a sunny Sunday on the city’s staunchly pro-British Newtownards Road seemed overly concerned.

“Obviously we don’t want a united Ireland and Sinn Fein is going to push for a border poll but I’d say bring it on, we’ve nothing to be afraid of,” said John Keenan, who runs the Union Jack Souvenir Shop.

His confidence was due to opinion polls that have consistently shown a majority of voters in Northern Ireland favour remaining part of the United Kingdom.

The pro-British loyalist community, named for its allegiance to the UK, was “worried” by Sinn Fein’s rise, Mr Keenan said.

But it also knows Sinn Fein cannot rule without the consent of the largest pro-British party, the Democratic Unionist Party, under the region’s carefully crafted 1998 peace deal.

That brings the prospect of direct rule from London if no agreement can be reached, which Mr Keenan said would make him and many others happy.

Walking with a friend nearby, Methodist Protestant Church minister Gary Mason said that though many loyalists – and more moderate pro-British unionists – were probably in shock at Sinn Fein’s success, others were not at all surprised, seeing it as the consequence of constant infighting among pro-British politicians.

Sinn Fein pushing for a unification referendum “is nothing new”, he said.

Across the city, wearing a Gaelic football jersey sporting the green, white and orange tricolour of the Irish Republic, 80-year-old Belfast man Tommy Shaw said he was “quite pleased” by Sinn Fein’s win.

He said he would “die happy” if Irish unification was achieved.

But he too expressed doubts a referendum on unification was closer as a result of Sinn Fein’s win.

“Not particularly,” he said as he enjoyed a drink with friends at a sports club named after a nationalist leader who fought for Irish independence.

While Sinn Fein activists and candidates held a party on Saturday, there were no big celebrations in the nationalist stronghold of the Falls Road, where Shaw’s Gaelic football team plays.

That reflected the fact many see the victory as a stepping stone and that the referendum required to leave the UK is at the discretion of the British government and likely to be years away.

The biggest consequence of last week’s vote could instead be a doubling of the number of seats won by the cross-community Alliance Party as it attracted the support of Irish nationalists and pro-British unionists disgruntled with their traditional parties.

“That’s been brilliant, they are showing that there is a middle ground there,” Mr Shaw said.