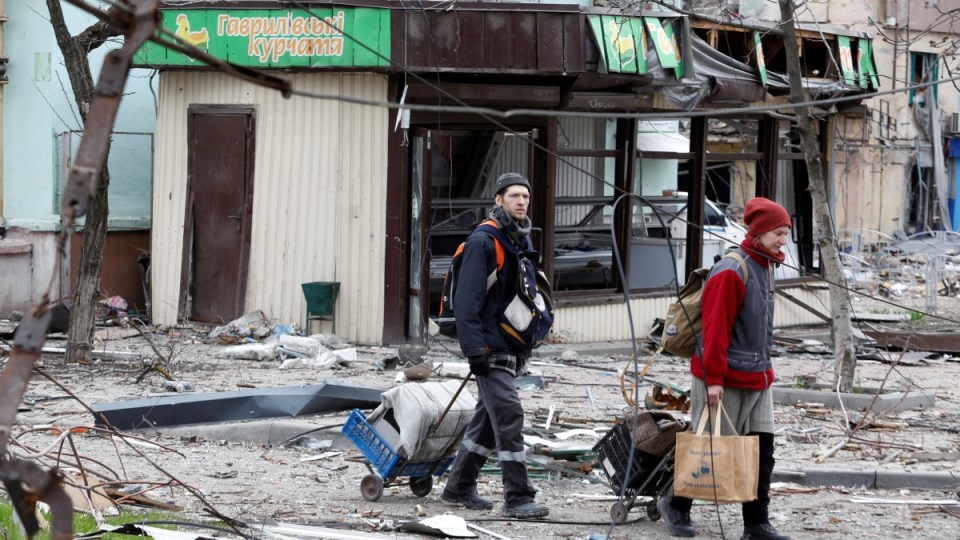 About 100,00 people are thought to be stranded in Mariupol, which is expected to fall to Russian forces within days. Photo: Getty

The besieged Ukrainian city of Mariupol will fall to Russian forces on Thursday, according to a key Putin ally.

Ramzan Kadyrov, who heads Russia’s republic of Chechnya, predicted the last stronghold in the city would collapse within hours, leaving it completely under Russian control, Reuters reported.

“Before lunchtime, or after lunch, Azovstal will be completely under the control of the forces of the Russian Federation,” Mr Kadyrov said, referring to the steel plant that has been a final holdout in the devastated city after weeks of attacks and shelling.

Major Serhiy Volyna, the Ukrainian soldier who is leading the handful of troops left in Mariupol and protecting civilians at the Azovstal plant, pleaded to the world for help in a video.

“We appeal and plead to all world leaders to help us. We ask them to use the procedure of extraction and take us to the territory of a third-party state,” he said, NBC News reported.

Just five people in the city had given themselves up following Moscow’s surrender-or-die ultimatum, according to Russian-backed separatists fighting in Mariupol.

About 100,000 people are believed to have remained in the city. They include about 1000 – many of them children or elderly – sheltering at the steel plant.

Major Volyna said on Thursday afternoon (Australian time) that Mariupol had no more than a few days left before it collapsed.

“The enemy units are dozens of times larger than ours, they have dominance in the air, in artillery, in ground troops, in equipment and in tanks,” he said.

Also on Thursday, two top Ukrainian officials – Ukrainian Parliamentary Majority Leader David Arakhamia and Mykhailo Podolyak, an adviser to President Vlodymyr Zelensky’s chief of staff – said they were ready to head to Mariupol to negotiate the evacuation of trapped soldiers and civilians.

“Without any conditions. We’re ready to hold a ‘special round of negotiations’ right in Mariupol. One on one. Two on two. To save our guys, Azov, military, civilians, children, the living and the wounded. Everyone. Because they are ours. Because they are in my heart. Forever,” Mr Podolyak tweeted on Wednesday.

In a video statement, Captain Svyatoslav Palamar of Ukraine’s Azov Regiment said Ukrainian soldiers in Mariupol were ready to evacuate with help from a third party “to rescue personnel, to evacuate our wounded and take the bodies of the dead and bury them with honours in the territory not controlled by the Russian Federation”.

Mariupol, once a prosperous city of 400,000, is now a wasteland where corpses lie in the streets. Black clouds of smoke billowed on Wednesday as evacuees queued to get onto buses, some clutching luggage or carrying small pets in their arms.

Ukrainian Deputy Prime Minister Iryna Vereshchuk said an evacuation corridor “did not work as planned” on Wednesday, and promised to try again on Thursday.

“Due to the lack of control over their own military on the ground, the occupiers were unable to ensure a proper ceasefire,” she said.

“Also, due to the inherent disorganisation and negligence, the occupiers were unable to provide timely transportation of people to the point where dozens of our buses and ambulances were waiting.”

Russia did not immediately respond to the allegation its forces had failed to observe the ceasefire agreement long enough to allow large numbers of people to leave.

It denies targeting civilians and has blamed Ukraine for the failure of earlier attempts to organise humanitarian corridors out of Mariupol.

Ukraine has proposed swapping Russian prisoners of war in exchange for safe passage for trapped civilians and soldiers.

If Russia captures Mariupol, it will link territory held by pro-Russian separatists in the east with the Crimea region that Moscow annexed in 2014.

Elsewhere, US defence think tank The Institute for the Study of War said Russia made minor gains in its invasion of Ukraine on Wednesday.

Russian troops also continued to attack in the populated Kharkiv and Kherson regions.

Ukraine said it had so far held off an assault by thousands of Russian troops attempting to advance in what Kyiv calls the Battle of the Donbas, a new campaign to seize two eastern provinces Moscow claims on behalf of separatists.

Russia’s forces had carried out strikes on dozens of military facilities in eastern Ukraine and had shot down a Ukrainian Mi-8 helicopter near the village of Koroviy Yar, its defence ministry said.

The US on Wednesday imposed restrictions on dozens of people and entities, including a commercial bank and a virtual currency mining company, targeting the evasion of existing rules.