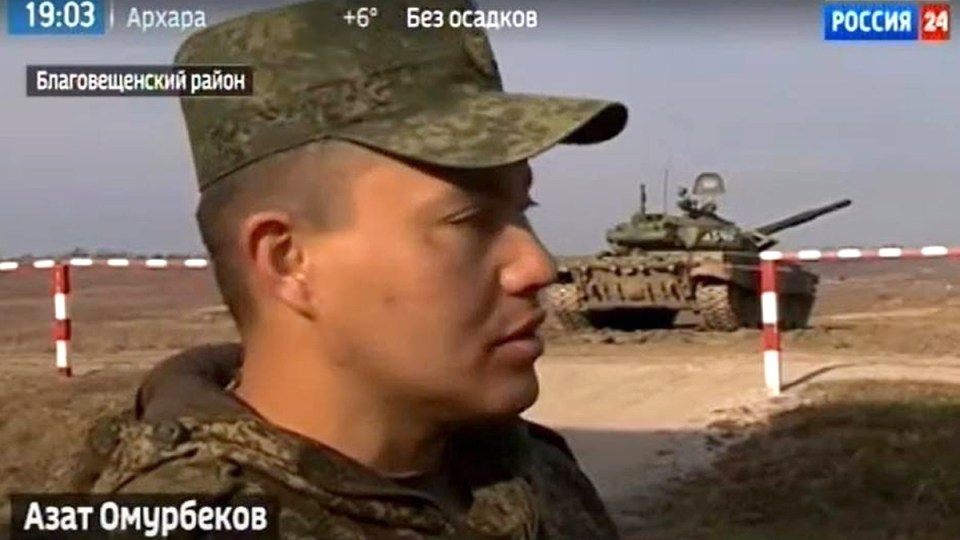 Lieutenant Colonel Azatbek Omurbekov is said to have led the Russian brigade that committed atrocities in Bucha. Photo: Twitter/InformNapalm

Ukrainian activists claim to have identified the “butcher of Bucha”, the decorated Russian commander who led the unit that cut a gruesome swathe through the town north of Kyiv.

He is being named as Lieutenant Colonel Azatbek Omurbekov, the leader of Russia’s 64th Separate Motorised Rifle Brigade.

Colonel Omurbekov, who is thought to be aged about 40, was first identified by InformNapalm, a Ukrainian volunteer group that monitors Russia’s military and special services.

He is a decorated soldier, who was blessed by an Orthodox priest in November, ahead being sent to Ukraine, according to Britain’s Times newspaper.

“History shows that we fight most of our battles with our souls,” Colonel Omurbekov reportedly said following the service, which was led by the bishop of Khabarovsk.

“Weapons are not the most important thing. The church is a place where we can take Communion and prepare for the coming events,” he said, according to the Times.

“With the blessing of the Almighty, we hope to achieve the same things that our forebears achieved.”

The Ukrainian group, InformNapalm, also shared Colonel Omurbekov’s home address and personal details, calling him the “military villain” behind the massacre in Bucha, the suburb of Kyiv where hundreds of bodies were found strewn in streets or tossed in mass graves when Russian forces left last week.

Ukrainian President Volodymyr Zelensky held back tears when he visited Bucha on Monday. He has accused Russia of gruesome atrocities in Ukraine and overnight told the United Nations Security Council that those responsible should immediately be brought up on war crimes charges in front of a tribunal like that established at Nuremberg after World War II.

Mr Zelensky, appearing on Tuesday via video from Ukraine, said civilians had been tortured, shot in the back of the head, thrown down wells, blown up with grenades in their apartments and crushed to death by tanks while in cars.

“They cut off limbs, cut their throats. Women were raped and killed in front of their children. Their tongues were pulled out only because their aggressor did not hear what they wanted to hear from them,” he said.

In recent days, grisly images of what appeared to be civilian massacres carried out by Russian forces in Bucha have caused a global outcry and led Western nations to expel scores of Moscow’s diplomats and propose further sanctions, including a ban on coal imports from Russia.

On Wednesday, reports began to emerge of similar atrocities in Borodianka, a town east of Kyiv. It was home to 13,000 people before the war, but most fled after Russia’s invasion. What was left of the town, after intense shelling and devastating airstrikes, was then occupied by Russian forces, which moved in on February 28.

“We are gathering people who were shot by the Russians. Civilians who were tortured. We have been working for two days,” 45-year-old Hennadiy Avramenko told CNN.

“They were shot for no reason.”

There are concerns the numbers of dead in the towns surrounding Kyiv will climb as more are revealed in coming days.

Mr Zelensky said those who carried out the killings and those who gave the orders “must be brought to justice immediately for war crimes” in front of a tribunal similar to what was used in postwar Germany.

Ukraine’s defence ministry has also printed a list of suspected members of the Russian death squad, vowing that “all war criminals will be prosecuted for crimes against the civilians of Ukraine”.

Defence minister Oleksii Reznikov described the behaviour of Russian troops in Bucha as “utterly inhuman” and compared them to Nazis.

“This is what the SS troops used to do in the past,” he said. “This evil simply cannot go unpunished.”

Under international law, a military commander is responsible for war crimes committed by his troops.

Moscow continues to deny any war crimes. Its ambassador to the UN, Vassily Nebenzia, said “not a single local person … suffered from any violent action” while Bucha was under Russian control.

He said video footage of bodies in the streets was “a crude forgery” staged by the Ukrainians.

“You only saw what they showed you,” he said.

“The only ones who would fall for this are Western dilettantes.”

Associated Press journalists in Bucha have counted dozens of corpses in civilian clothes and interviewed Ukrainians who told of witnessing atrocities. Also, high-resolution satellite imagery from Maxar Technologies showed many of the bodies had been lying in the open for weeks, during the time that Russian forces were in the town.

The chief prosecutor for the International Criminal Court at The Hague opened an investigation a month ago into possible war crimes in Ukraine.

While both Ukrainian and Russian representatives sent optimistic signals following their latest round of talks a week ago, Russian Foreign Minister Sergey Lavrov said Moscow won’t accept a Ukrainian demand that a prospective peace deal include an immediate withdrawal of troops followed by a Ukrainian referendum on the agreement.

Mr Zelensky told the Security Council there was “not a single crime” that Russian troops hadn’t committed in Bucha. He likened their actions to those of the Islamic State group.

“The Russian military searched for and purposefully killed anyone who served our country. They shot and killed women outside their houses when they just tried to call someone who is alive. They killed entire families, adults and children, and they tried to burn the bodies,” he said.

They used tanks to crush civilians “just for their pleasure”, he said.

US Secretary of State Antony Blinken said the images from Bucha revealed “not the random act of a rogue unit” but “a deliberate campaign to kill, to torture, to rape, to commit atrocities”.

He said the reports of atrocities were “more than credible”.

The US, in coordination with the European Union and Group of Seven nations, will roll out more sanctions against Russia on Wednesday, including a ban on all new investment in the country, a senior administration official said.

But Western nations are divided over how far to go. While some are calling for a boycott of Russian oil and gas, Germany and others fear that such a move could plunge the continent into a severe economic crisis.