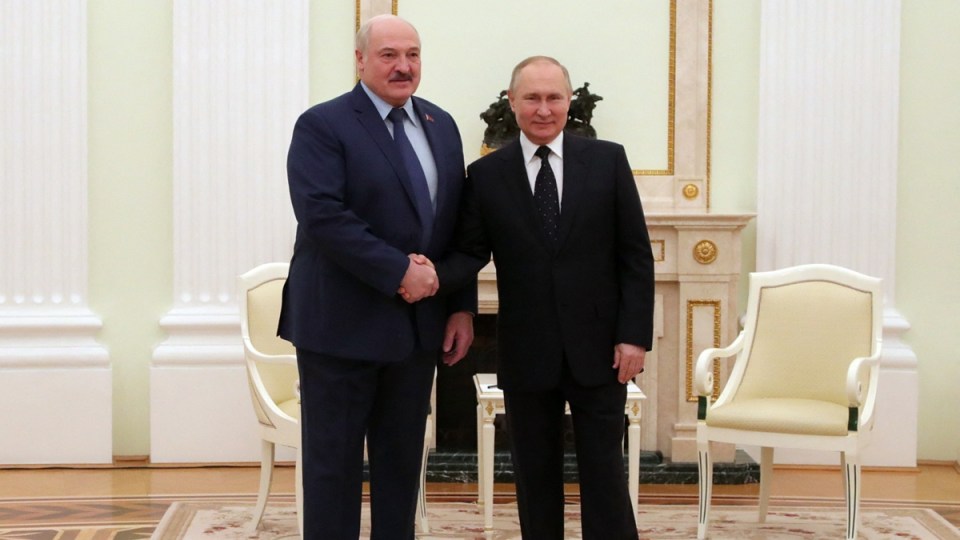 Australia has imposed sanctions on Belarusian President Alexander Lukashenko and his family, following their support of Russia’s invasion of Ukraine.

The government has also imposed sanctions on 22 Russian propagandists and disinformation operatives, including senior editors of state broadcaster Russia Today.

Foreign Minister Marise Payne said the latest round of sanctions against the Belarus president was due to the country providing strategic support to Russia.

“The Belarusian government allowed Russian military forces to train in their country for weeks ahead of the invasion,” she said in a statement.

There are now sanctions against 32 pro-Kremlin propagandists, including editors from the Strategic Culture Foundation, InfoRos and NewsFront.

“These latest steps, one month into Russia’s invasion of Ukraine, continue our focused efforts to ensure that Russia and those who support its illegal, unprovoked invasion of its democratic neighbour, pay a high cost,” Senator Payne said.

“The Australian government reiterates our unwavering support for Ukraine’s sovereignty and territorial integrity, and for the people of Ukraine.”

It came as former prime minister Kevin Rudd backed US calls for Russia to be kicked out of the G20.

Overnight, US President Joe Biden said Russia should be removed from the global body following its invasion of Ukraine.

President Biden said if countries such as Indonesia, which is hosting this year’s G20 summit, did not agree with Russia’s removal then Ukraine should be allowed to attend the meeting of global leaders.

Mr Rudd, who helped elevate the G20 into a leaders’ summit while prime minister, said Australia should back the US in calling for Russia’s removal.

“Given the egregious action by Russia in the territorial invasion of Ukraine, I believe that as a treaty ally of the United States we should support the leadership of the US president on this matter, until we have a resolution of the situation in the Ukraine,” he told ABC Radio on Friday.

“It took a lot of diplomacy to get Australia in a position at the top of the economic table of the world.”

On Thursday, Prime Minister Scott Morrison said allowing Russian President Vladimir Putin’s presence at the G20 meeting in October would be a step too far.

Federal Labor has also joined calls for Australia to work in lockstep with other allies. Deputy leader Richard Marles has indicated Australia should work with other G20 nations on how to handle Russia’s presence.

“We should be working with Indonesia and all the G20 countries to make sure that at the next G20 there is complete unanimity in condemning Russia for its war aggression in Ukraine,” Mr Marles told the Nine Network.

“That’s really important that the G20 adds its voice to the global communities, which we’re seeing with NATO, which we’ve seen with the General Assembly of the UN.

“It’s really important the G20 adds its voice to all the voices in condemning Russia for what it’s doing.”

The pandemic has taken its toll on Australian nurses, and now hospitals are scrambling for staff
Russian troops near Kyiv low on morale and in danger of being surrounded as Ukraine fights back
Today's Stories

Fresh sanctions against Russia and Belarus