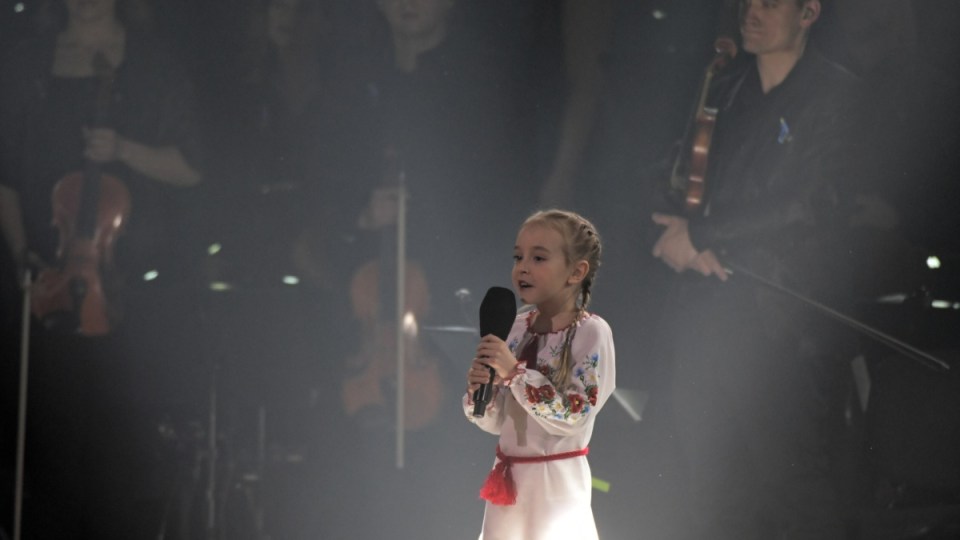 Amelia Anisovych on stage at the Together with Ukraine concert in Poland. Photo: AAP

A seven-year-old girl who went viral singing the theme from Disney’s Frozen in a Ukrainian bomb shelter has shown off her singing talents in front of thousands in Poland.

Dressed in a traditional white Ukrainian outfit, Amelia Anisovych sang her country’s national anthem in a crowded stadium for a charity concert in Lodz on Sunday night.

Amelia was last seen standing among a group of people sheltering in a crowded Kyiv bomb shelter. As she began to sing Let it Go, the group goes quiet, and some take out their phones to film her.

Video of the little girl’s singing was originally posted to Facebook on March 4, about a week after the Russian invasion started. It has been seen by millions since.

Amelia and older brother fled to Poland soon after. They are reportedly now staying with their grandmother, while their parents remained in Kyiv to help Ukraine fight the Russian invasion.

On Sunday night, she appeared on stage at Lodz’s Atlas Arena, singing the Ukrainian anthem to a silent crowd.

She also made a second appearance, returning to the stage later with her idol, Ukrainian singer and actress Tina Karol, who had invited Amelia to sing a duet.

Amelia’s rendition of Let it Go also caught the attention of Idina Menzel — who first sang the song as Elsa in the popular Disney movie.

“We see you. We really, really see you,” the star wrote.

The viral clip also caught the eye of Kristen Anderson-Lopez, who co-wrote the music for Frozen. She shared shared the clip on Twitter with an open letter to Amelia.

“Dear Little Girl with the beautiful voice,” she began. “My husband and I wrote this song as part of a story about healing a family in pain. The way you sing it is like a magic trick that spreads the light in your heart and heals everyone who hears it. Keep singing! We are listening!”

Later, Amelia told BBC Breakfast that she was thankful for the response.

“I practice singing every day in the morning, afternoon, and evening. I rehearse, and that is why it turned so well,” she said.

“It has always been my dream to sing.”