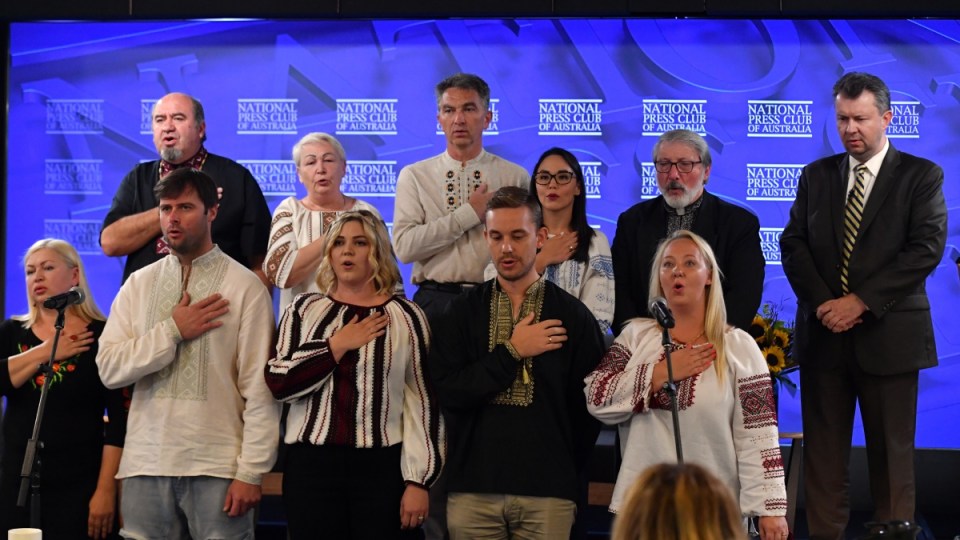 Two weeks to the day since the invasion of Ukraine began, 10 members of the Canberra-Ukraine community have stood alongside the country’s Australian envoy to sing their national anthem, hands on hearts.

In a speech to the National Press Club, Ukraine’s Charge d’Affaires Volodymyr Shalkivskyi declared the country would not surrender as the world witnesses the fierce fight of Ukrainians defending their country.

Russia had expected to meet all its military objectives and be welcomed by Ukrainian citizens, Mr Shalkivskyi said.

“(Russian President Vladimir) Putin truly believed people would greet (Russians) with flowers. Instead, they were met with Molotov cocktails,” he said.

‘No way will we give up’

“You cannot win a war against a free people determined to fight for their freedom. There is no way we will give up.”

Mr Shalkivskyi said Mr Putin’s view of the world is severely compromised because Kremlin loyalists would suppress any pro-Western information, skewing his understanding of Western unity.

“In Putin’s mind the West was divided, so it was easy to play the game with the West in order to divide and negotiate,” he said.

Mr Shalkivskyi said Russian tanks and troops have run out of oil, and instructions from their commanders remain unclear.

“They are asking locals how to get to Kyiv. It is quite amazing in terms of war-planning,” he said.

“(But) there is no indication on the ground Russia will stop. We are preparing for a long-term war.”

‘I would like the  Russian ambassador to be expelled’

The envoy also changed his tone on calling for the Russian ambassador to be expelled from Australia, previously saying it was a diplomatic decision for the federal government.

“When you have more than 50 children killed in your country due to the shelling, yes I would like the Russian ambassador to be expelled,” he said.

“Every government needs to have lines of communication but I’m not in the position to be diplomatically polite. Having my parents in a bomb shelter, it makes you more decisive.”

Labor’s foreign affairs spokeswoman Penny Wong said the foreign minister would need to determine whether Australia expels the ambassador to send a message, or keeps an open communication channel with the Russian government.

“That’s a judgment that has to be weighed upon by these recent horrific events and a judgment the foreign minister of the day really has to make,” Senator Wong told Sky News.

The renewed calls for diplomatic expulsion came after the bombing of a maternity hospital.

Senator Wong called it an “appalling and horrific act” for which Russia should be deeply ashamed.

“I completely understand the Ukrainian Charge’s position,” she said.

While Russia has denied targeting civilians, Ukrainian President Volodymyr Zelenskiy said people and children were trapped under the wreckage of the hospital.

Another round of talks between Russia and Ukraine is expected on Thursday with Mr Zelenskiy expressing a willingness to hold talks on the status of the separatist regions, according to the DPA newswire.

“I am ready for a dialogue – we are not ready for capitulation,” he said in an interview with US broadcaster ABC late on Monday.

“We can discuss and find a compromise on how these territories will live on.”

Australia to continue to send support

Treasurer Josh Frydenberg said Australia would continue to send support to Ukraine to help keep the Russian invasion at bay, following a meeting with his United States and United Kingdom counterparts.

The role of China in tacitly supporting Russia also drew stern criticism in Australia on Thursday.

Opposition Leader Anthony Albanese said China had failed in its responsibility as a permanent member of the UN Security Council by offering Russia relief from sanctions.

“There are many reasons to be concerned about such a friendship, particularly in light of China’s growing assertiveness in our region,” he told foreign policy think tank the Lowy Institute.

“Both at home and in its international posture, the China of (President) Xi Jinping has demonstrated a harsher authoritarianism and more strident nationalism.”