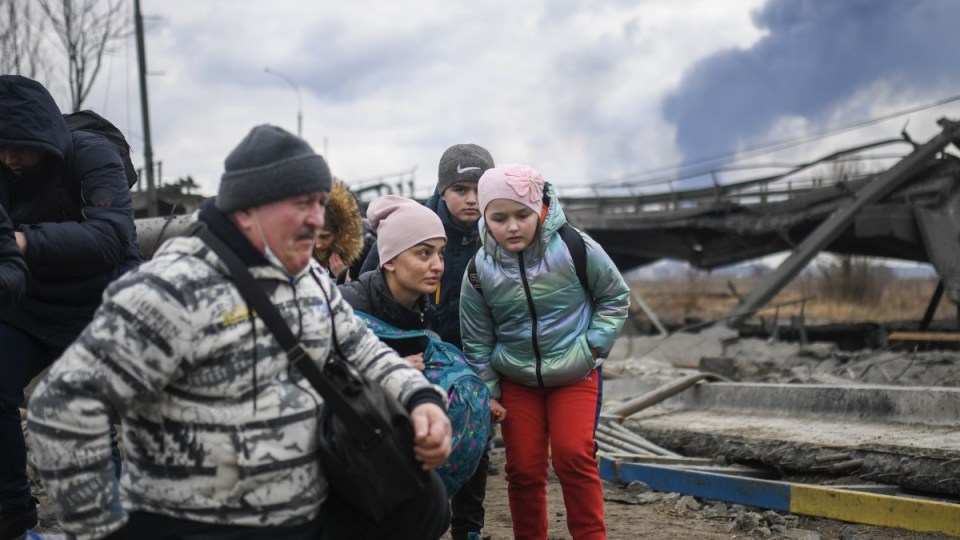 Ukrainian President Volodymyr Zelensky has published another video message, accusing Russia of planning “deliberate murder” in his country – as reports emerged of Syrian fighters being recruited for the conflict in Europe.

“Today is Forgiveness Sunday. But we cannot forgive the hundreds upon hundreds of victims. Nor the thousands upon thousands who have suffered,” the video was captioned.

“And God will not forgive. Not today. Not tomorrow. Never. And instead of forgiveness, there will be judgment.”

Mr Zelensky’s video message was released as his defence officials warned Russia was preparing its forces to launch an all-out assault on the capital of Kyiv.

“For tomorrow Russia has officially announced the shelling of our territory. Our enterprises of the defence complex. Most were built decades ago by the Soviet government, built in cities. And now they are in the middle of an ordinary urban environment,” Mr Zelensky said.

“Thousands of people work there. Hundreds of thousands live nearby.”

He added, “this is murder. Deliberate murder.”

Elsewhere, US officials have told the Wall Street Journal that Russia is recruiting Syrians skilled in urban combat to fight in Ukraine. They said Moscow – which has operated in Syria since 2015 – was preparing for intense street-to-street fighting in its push to seize major Ukrainian cities.

The Americans would not say how many fighters had agreed to support Russia. But they said some were already in Russia, ready to be sent into Ukraine.

Russian authorities are said to believe sending fighters, hardened by years of urban warfare in Syria, could add muscle to the fight to seize key Ukrainian cities, including Kyiv.

Ukrainian military officials said in an update on Monday (Australian time) that Russian forces had started to gather resources for an attack on Kyiv. Tanks and motorised infantry units were reported advancing towards the nearby town of Irpin to lay the groundwork.

Men, women and children trying to escape heavy fighting in Irpin have reportedly been forced to take cover as missiles struck nearby.

Ukraine also said Russia had increased its focus on the eastern cities of Kharkiv, Chernihiv, Sumy and the southern city of Mykolayiv.

Video published on social media on Saturday showed parts of a Ukrainian tank factory outside of Zhytomyr – about 140 kilometres west of Kyiv – that has been levelled after Russian military strikes.

Mr Zelensky said he had not heard from any allies on Sunday.

“I have not heard a reaction from any world leader today. From no Western politician. There are no reactions to this announcement. Think about the sense of impunity of the occupiers: They announce the atrocities that are planned. Why?”

Britain’s Ministry of Defence said on Sunday Russia was targeting populated areas “likely” as an effort to break Ukraine’s morale.

Earlier, fighting stopped about 200,000 people from evacuating the besieged city of Mariupol for a second day in a row, as Russian President Vladimir Putin vowed to press ahead with his invasion unless Kyiv surrendered.

Most people trapped in the port city were sleeping underground to escape more than six days of near-constant shelling by encircling Russian forces that has cut off food, water, power and heating supplies, according to the Ukrainian authorities.

In a phone call with Turkish President Tayyip Erdogan, Mr Putin said he was ready for dialogue to end the fighting but that any attempt to draw out talks would fail.

The suspension of what Moscow described as a special operation was “only possible if Kyiv stops military operations and carries out well-known Russian demands”, the Kremlin said in a readout of the call.

The civilian death toll from hostilities across Ukraine since Moscow launched its invasion on February 24 stood at 364, including more than 20 children, the United Nations said on Sunday. Hundreds more have been injured.

Russia has launched about 600 missiles so far, according to a senior US defence official. But Moscow has repeatedly denied attacking civilian areas.

The International Committee of the Red Cross said the failed attempt to evacuate 200,000 people from Mariupol had underscored “the absence of a detailed and functioning agreement between the parties to the conflict.”

“They will not even give us an opportunity to count the wounded and the killed because the shelling does not stop.”

US Secretary of State Antony Blinken said the US had seen credible reports of deliberate attacks on civilians in Ukraine, adding that Washington was documenting them to support a potential war crimes investigation.

A huge Russian convoy north of Kyiv appears to have made limited progress in recent days, although Russia’s defence ministry released footage on Sunday showing some tracked military vehicles on the move.

The US defence official estimated that Russia has deployed about 95 per cent of the combat forces it had staged outside Ukraine.

Ukrainians have also continued to pour into Poland, Romania, Slovakia and elsewhere. The United Nations said over 1.5 million had fled in Europe’s fastest growing refugee crisis since World War II.

‘There will be judgment’ for Russia, Zelensky pledges