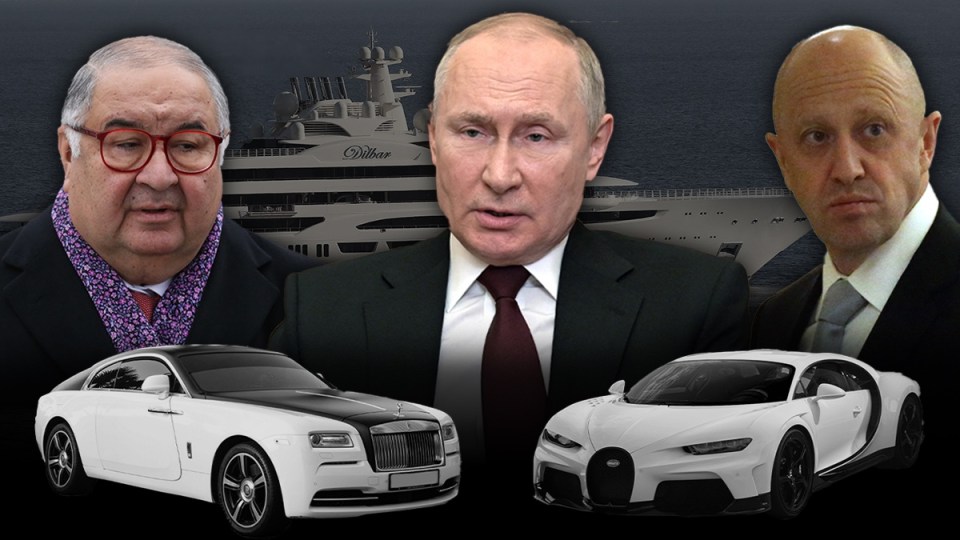 Australia, the United States and the UK are among a host of nations imposing more and more sanctions increasingly targeting individuals within Vladimir Putin’s circle.

Several hundred Russian oligarchs and Putin associates have already been sanctioned, with more likely to come.

These individuals are accused of aiding or benefiting from the current war in Ukraine due to their close government ties and stakes in key industries.

Now governments are working to seize their assets, including extravagant acquisitions that including jets, yachts and mansions around the world.

Reuters reports that at least five oligarchs’ megayachts have fled to the Maldives, which does not have an extradition treaty with the United States.

Other oligarchs have been on sanctions lists for years, such as Viktor Vekselberg and Oleg Deripaska, who both have stakes in Australia-based natural resources.

Here are a few key Putin associates who, along with their families, have been hit by the latest round of sanctions.

Alisher Usmanov is a worth AU$25.3 billion according to the Bloomberg Billionaires Index.

The oligarch started out with mining investments after the fall of the Soviet Union and currently counts copper and aluminium operations, a phone network and a major daily newspaper among his interests.

The White House described Mr Usmanov as a “one of Russia’s wealthiest individuals and a close ally of Putin.”

The oligarch reportedly owned more than $130 million worth of real estate in the United Kingdom, and recently had his sponsorship of the Everton football club frozen.

The 157-metre vessel is worth $810 million and includes two helipads, the largest swimming pool ever installed on a yacht, a sauna, a beauty salon and a gym.

Forbes reported this week that the ship was seized at a dock in Hamburg, however German authorities have since clarified that while the boat has not been seized, it will require Customs to sign-off on its departure from the port.

Igor Sechin is the CEO of the oil company Rosneft, half-owned by the Russian government.

He also served as the Deputy Prime Minister of Russia under Mr Putin from 2008 until 2012.

The EU described Mr Sechin as one of Mr Putin’s “most trusted and closest advisors” and “one of the most powerful members of the Russian political elite.”

On Friday, French authorities confirmed they had prevented Mr Sechin’s 85-metre megayacht L’Amore Vero from making a last-minute dash out of the country.

The boat was due to remain on the Cote d’Azur until April 1 for maintenance, but French customs spotted the crew “taking steps to sail off urgently.”

Nikolay Tokarev is the head of state-owned pipeline company Transneft, and a close ally of Putin since their days in the KGB together.

“As the president of Transneft, Tokarev has enriched himself and his family, amassing a business and real estate empire extending throughout Russia and into Europe,” the US Treasury said.

Yevgeniy Prigozhin is nicknamed “Putin’s chef” because he made his fortune in the hospitality industry.

However Mr Prigozhin has since branched into other fields. His exact net worth is unknown but his companies have received billions in government contracts.

The oligarch also allegedly owns the Wagner Group mercenary force, which has been active in Ukraine, Syria and many parts of Africa.

He has also allegedly bankrolled the Saint Petersburg-based Internet Research Agency – the so-called “troll farm” – which attempted to influence the US election with online misinformation.

In 2019 the US Treasury targeted his yacht St. Vitamin and three private jets with sanctions.

Billionaire brothers Arkady and Boris Rotenberg co-own the Stroygazmontazh construction company which primarily deals with the oil and gas industry, as well as a large bank.

The Rotenbergs are childhood friends of Putin, and the three even did judo together.

Sergey Chemezov is the CEO of state-owned arms manufacturer Rostec, and a close associate of Putin since their KGB days.

In 2018 he told one Russian broadcaster: “I do not accumulate wealth. I don’t stuff money in the corners. I don’t have yachts or airplanes.”

The Pandora Papers leak later tied Mr Chemezov to an 85-foot megayacht Valerie and luxury villas in Spain worth several hundreds of millions of dollars.

He also reportedly owns a 1,400-square-meter, two-floor apartment in the Hotel Moskva valued at AU $93 million.

Mr Aven was described by the EU as “one of Vladimir Putin’s closest oligarchs” and an “especially close personal friend” of Rosneft CEO Sechin.

He and Mikhail Fridman co-founded the investment company LetterOne, which worth almost AU $30 billion and based in Luxembourg.

Mr Aven stepped down from LetterOne’s board and had his shares frozen shortly after he was placed on the EU sanctions list.

An avid art collector, he also stepped down as a trustee of the Royal Academy of Arts in London.

Mikhail Fridman is a close associate of Mr Aven thanks to their joint involvement in Alfa-Bank and LetterOne.

The oligarch has a net worth of AU $13.5 billion according to Bloomberg.

Among many other assets, the UK-based billionaire owns Athlone House in north London, which he purchased in 2016 for around AU $118 million.

Born in Ukraine, Mr Fridman recently called for “bloodshed to end” but was nevertheless included on new sanction lists for his proximity to the Russian government.

Like Mr Aven, his shares in LetterOne were frozen this week and he stepped down from the board.