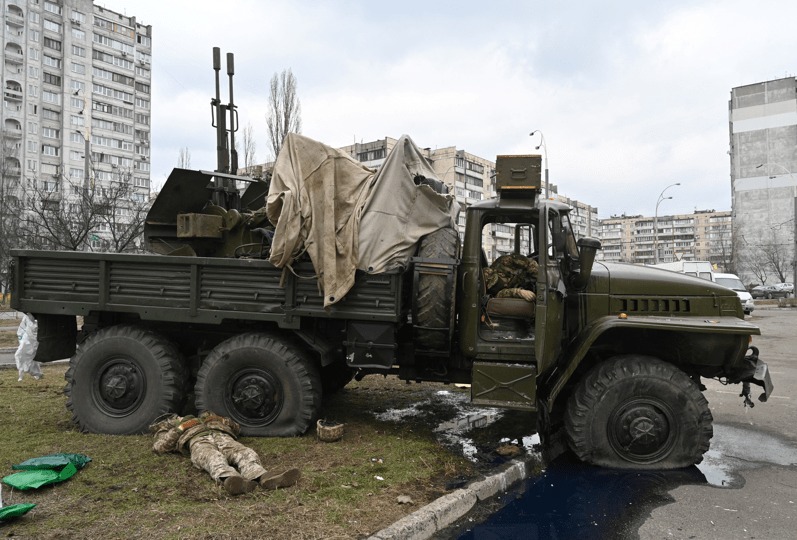 The Russian and Ukrainian governments have signalled an openness to negotiate even as authorities in Kyiv urged citizens to help defend the capital from advancing Russian forces.

The faint glimmer of hope for peace came as Russian and Ukrainian forces clashed on the outskirts of Kyiv, the Ukraine’s capital, as authorities urged citizens to help defend the city from advancing Russian forces in the worst European security crisis in decades.

Heavy, frequent artillery fire and intense gunfire, apparently some distance from the city centre, could be heard on Saturday in Kyiv in the early hours, a Reuters witness said.

The Ukrainian military said Russian troops attacked an army base on a main Kyiv avenue but the assault was repelled.

But even as the fighting grew more intense, the Russian and Ukrainian governments signalled an openness to negotiations, offering the first glimmer of hope for diplomacy since Russian President Vladimir Putin launched the invasion on Thursday.

Ukraine and Russia will consult in coming hours on a time and place for talks, Ukrainian President Volodymyr Zelenskiy’s spokesman Sergii Nykyforov said on social media, offering the first glimmer of hope for diplomacy since the invasion began.

The Kremlin said earlier it offered to meet in the Belarusian capital Minsk after Ukraine expressed a willingness to discuss declaring itself a neutral country, but that Ukraine had proposed Warsaw as the venue.

That, according to Russian spokesman Dmitry Peskov, resulted in a “pause” in contacts.

“Ukraine was and remains ready to talk about a ceasefire and peace,” Nykyforov said in a post on Facebook.

“We agreed to the proposal of the President of the Russian Federation.”

But US State Department spokesman Ned Price said Russia’s offer was an attempt to conduct diplomacy “at the barrel of a gun”, and that President Vladimir Putin’s military must stop bombing Ukraine if it was serious about negotiations.

The diplomatic overtures stood in stark contrast to events unfolding on the ground and Putin’s harsh rhetoric against Ukrainian leaders, including a call for a coup by the country’s military.

Kyiv residents were told by the defence ministry to make petrol bombs to repel the invaders, and on Friday evening witnesses reported hearing artillery rounds and intense gunfire from the western part of the city.

The sound of frequent artillery fire, apparently some distance from the city centre, continued in the early hours of Saturday.

Zelenskiy filmed himself with aides on the streets of the capital, vowing to defend Ukraine’s independence.

‘We must withstand this night’

“Tonight, they will launch an assault. All of us must understand what awaits us. We must withstand this night,” he said in a video address posted to his Telegram channel.

“The fate of Ukraine is being decided right now.”

Some families cowered in shelters after Kyiv was pounded on Thursday night by Russian missiles. Others tried desperately to get on packed trains headed west, some of the hundreds of thousands who have left their homes to find safety, according to the United Nations’ aid chief.

After weeks of warnings from Western leaders, Putin unleashed a three-pronged invasion of Ukraine from the north, east and south on Thursday, in an attack that threatened to upend Europe’s post-Cold War order.

“I once again appeal to the military personnel of the armed forces of Ukraine: do not allow neo-Nazis and (Ukrainian radical nationalists) to use your children, wives and elders as human shields,” Putin said at a televised meeting with Russia’s Security Council on Friday.

“Take power into your own hands.”

Putin has cited the need to “de-Nazify” Ukraine’s leadership as one of his main reasons for invasion, accusing it of genocide against Russian-speakers in eastern Ukraine.

Kyiv and its Western allies dismiss the accusations as ridiculous and baseless propaganda.

In New York, Russia vetoed a draft UN Security Council resolution that would have deplored Moscow’s invasion, while China abstained, a move Western countries viewed as proof of Russia’s isolation. The United Arab Emirates and India also abstained while the remaining 11 members voted in favour.

Britain’s defence ministry said Russian armoured forces had opened a new route of advance towards the capital after failing to take Chernihiv.

Ukraine claims more than 1000 Russian soldiers had been killed so far. Russia did not release casualty figures.

US Secretary of State Antony Blinken spoke to his Ukrainian counterpart and condemned reported civilian deaths, including those of Ukrainian children, in attacks around Kyiv, the State Department said.

Refugees in their thousands

United Nations aid chief Martin Griffiths said hundreds of thousands of people were on the move in Ukraine.

The White House asked Congress for $US6.4 billion ($A8.9 billion) in security and humanitarian aid for the crisis, officials said.

Ukraine has banned men of fighting age from leaving, and at borders with Poland, Romania, Hungary and Slovakia, those seen crossing by Reuters journalists were mostly women and children.

White House spokeswoman Jen Psaki said the coordinated decision to sanction Putin – something US President Joe Biden had avoided until now – was intended to send a clear message of allied unity.

Putin says Ukraine, a democratic nation of 44 million people, is an illegitimate state carved out of Russia, a view Ukrainians see as aimed at erasing their more than thousand-year history.

He says he does not plan a military occupation, only to disarm Ukraine and remove its leaders, but it is not clear how a pro-Russian leader could be installed unless Russian troops control much of the country.

Ukrainians voted overwhelmingly for independence at the fall of the Soviet Union and Kyiv hopes to join NATO and the EU – aspirations that infuriate Moscow.

As air raid sirens wailed over Kyiv for a second day, some residents sheltered in underground metro stations.