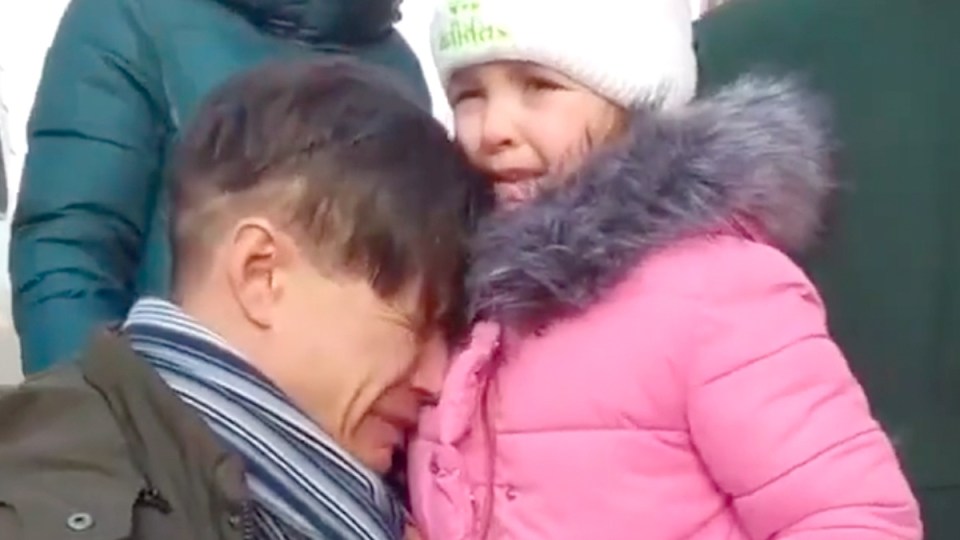 The video shows father and daughter both breaking down in sobs. Photo: Twitter

A heart-breaking video has emerged of a Ukrainian father farewelling his young daughter as she is sent to safety from the deadly Russian invasion.

The video – which has been viewed thousands of times online – shows the man breaking down in tears as he hugs the little girl, who is clad in a pink puffer jacket.

She is also crying, as she, the man and a woman hug tightly, all weeping.

The girl boards a bus, presumably headed to safety beyond Ukraine’s borders, and the man puts his hand to the window. The woman (identified by her teal-coloured coat) can be seen touching his hand through the window as the girl turns to do the same.

The woman and girl in the unverified video are presumed to be among thousands of Ukrainians who have fled into neighbouring countries, mainly Moldova and Romania, in just 24 hours since Russia launched its brutal invasion.

UN High Commissioner for Refugees (UNHCR) spokesperson Shabia Mantoo said an estimated 100,000 had already fled. She said the figures were compiled from reports from national authorities and its staff and partner agencies.

It came as Ukrainian President Volodymr Zelenskyordered ordered a general military mobilisation “in order to ensure the defence of the state, maintaining combat and mobilisation readiness of the Armed Forces of Ukraine and other military formations”. At the same time, Ukraine barred male citizens between the ages of 18 and 60 from leaving the country,

Central European countries across the region are bracing for many more refugees as the conflict goes on, setting up reception points and sending troops towards the borders to provide assistance.

The countries on the European Union’s eastern flank were all once part of the Moscow-led Warsaw Pact and are now members of NATO.

Among them, Poland, Hungary, Slovakia and Romania all share land borders with Ukraine.

Russia’s all-out invasion of Ukraine by land, air and sea is the biggest attack by one state against another in Europe since World War II. It has fuelled fears of a massive flood of refugees fleeing Ukraine, a nation of 44 million people.

Mr Zelensky said late on Thursday (Ukraine time) that 137 Ukrainian solders had already been killed since the invasion, with a further 316 wounded.

Poland called for the “fiercest possible sanctions” against Russia.

He said Hungary would prepare humanitarian aid for Ukraine and was ready to receive refugees.

Ukrainians started trickling into Poland, home to the region’s largest Ukrainian community of about one million and the easiest EU country to reach from Kyiv.

Dozens were arriving at the normally quiet Medyka crossing on Thursday, some carrying luggage and accompanied by children.

Groups of people also fled into Hungary via the Beregsurany and Tiszabecs crossings, some coming from as far as Kyiv, a Reuters eyewitness said. Some arrived by car but many pedestrians were also hauling suitcases across.

Slovak customs officials said passenger cars were having to wait up to eight hours at the busiest of Slovakia’s three road crossings with Ukraine.

Poland was preparing a medical train to transport wounded Ukrainians and drew up a list of 1230 hospitals that could admit the injured, the health ministry said. The Polish army raised the level of preparedness of some units.

“We will do everything to ensure that every person who enters the territory of Poland has access to healthcare, including hospitalisation,” the ministry said.

Germany offered humanitarian help to countries bordering Ukraine. German media have cited estimates that between 200,000 and one million people may flee to the EU from Ukraine.