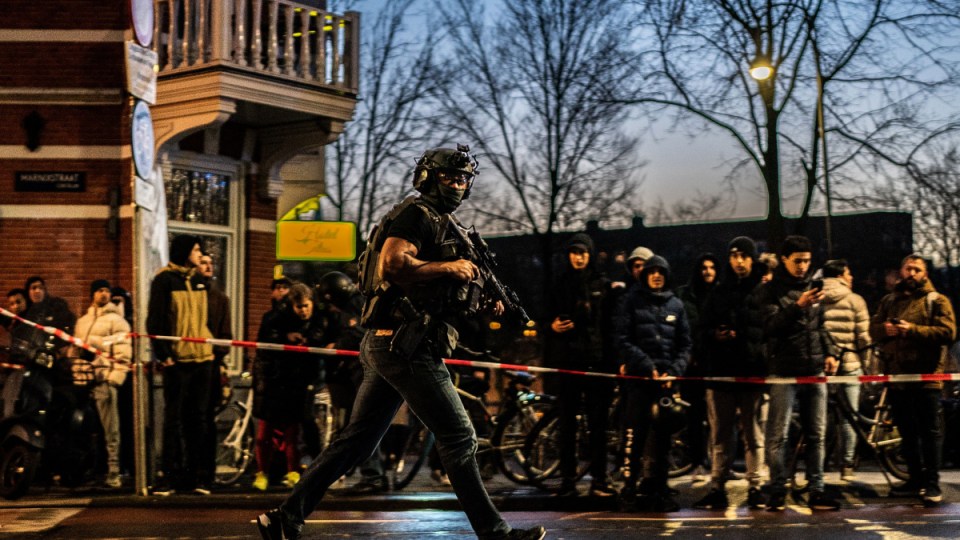 An armed Dutch police officer, outside the Apple store in Amsterdam where a man is believed to have taken hostages. Photo: Getty

Dutch police have ended a hostage situation in an Apple flagship store in Amsterdam, where a man with a gun held at least one person hostage for hours.

Police said the hostage taker was arrested after he ran out of the building at the central Leidseplein square, shortly after 10.30pm on Tuesday (local time).

“We managed to end the situation by hitting the hostage taker with a car when he ran outside,” police said in a tweet, adding that the man was being treated for his injuries.

Images circulating on social media showed two people running out of the Apple store and one of them being hit by an unmarked car, flying over the bonnet from the impact. The images could not be immediately verified by Reuters.

There were no reports of any other injuries.

Witnesses said earlier in the night they had heard gunshots from near the store about 5.30pm.

Police reported an incident at a shop at the square shortly after 6pm and a large number of forces took up position around the Apple store.

Police confirmed reports of a hostage situation, clearing the usually crowded square at the south side of Amsterdam’s centre and urging people in the area to stay indoors.

Images on social media showed a man in a camouflage outfit brandishing what looked like a gun and holding another man hostage inside the Apple store.

During the night, dozens of people had been able to leave the large Apple store.

Police did not give any details about the hostage taker or the cause of the incident.