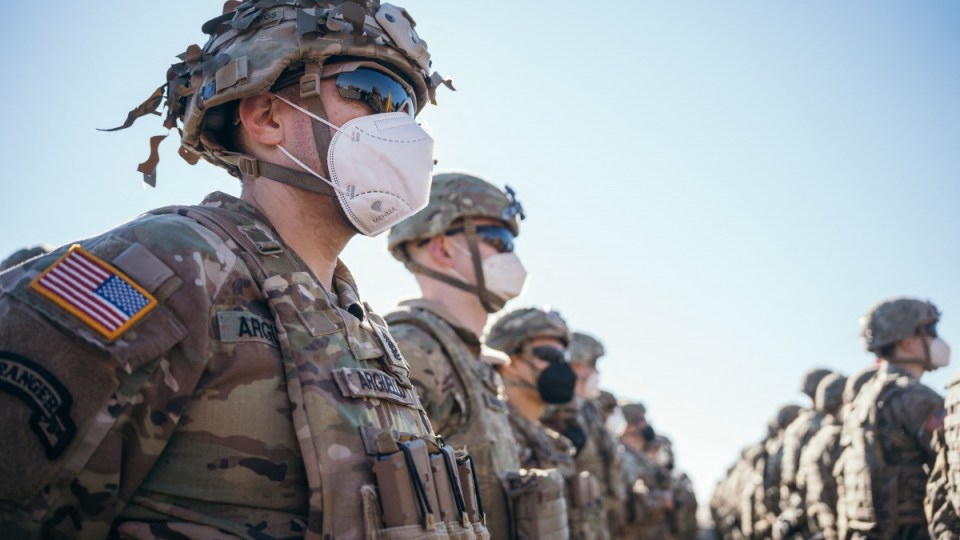 US troops in Romania, as tensions rise in eastern Europe. Photo: Getty

US President Joe Biden has urged Americans to leave Ukraine immediately, warning that “things could go crazy quickly” in the region.

A host of nations followed suit early on Saturday as US media reported that Russian President Vladimir Putin had approved an invasion of the country to begin next week.

Aerial bombardments and electronic warfare will reportedly be followed by a “horrific, bloody” ground invasion.

In his starkest warning yet to US citizens in Ukraine amid the rising tensions, Mr Biden earlier said he would not send troops to rescue them if Russia attacked.

Britain’s foreign office said its nationals “should leave now while commercial means are still available”, while Japan, South Korea and the Netherlands have also advised citizens to leave the country. Israel will remove the families of its diplomats and employees from its embassy in Kiev.

Australians had already been advised by the federal government in late January to leave Ukraine.

“It’s not like we’re dealing with a terrorist organisation,” Mr Biden said.

“We’re dealing with one of the largest armies in the world. It’s a very different situation and things could go crazy quickly.”

CNN said on Saturday that the White House had approved a plan for the nearly 2000 US troops in Poland to help Americans who may try to evacuate Ukraine if Russia invades.

Russia has demanded that the US and the European Union guarantee the NATO military alliance will never let Ukraine join the bloc.

They have refused to do so but sent their own proposals to Russia.

Also on Saturday, Russian Defence Minister Sergei Shoigu told his British counterpart Ben Wallace at a meeting in Moscow that the country would respond “in the nearest future” to counterproposals on European security made by the US and NATO.

Mr Shoigu urged the US and its allies to stop supplying arms to Ukraine and said Russia was not to blame for the rising tensions in Europe.

He also wanted to know why Britain was sending special forces to Ukraine.

Russia has amassed more than 100,000 troops near its border with Ukraine but denies that it plans to invade its neighbour.

In an escalation of language on the crisis, US Secretary of State Antony Blinken said in Melbourne on Friday that a Russian invasion could come at any time.

“We’re in a window when an invasion could begin at any time, and to be clear, that includes during the Olympics,” he said.

The Beijing Games end on February 20.

US officials have previously said they thought Russia would not act before the end of the Games.

Russia meanwhile dismissed answers sent this week by the EU and NATO to its security demands as an insult.

Russia denies plans to invade Ukraine but said it could take unspecified “military-technical” action unless a series of demands were met, including promises from NATO never to admit Ukraine and to withdraw forces from eastern Europe.

Four-way talks in Berlin between Russia, Ukraine, Germany and France, part of a longstanding peace process in a conflict between Ukraine and Russian-backed separatists, yielded no progress on Thursday.

The build-up of Russian military forces on Ukraine’s border matters to Australia despite being half a world away, Mr Blinken says.

Following talks in Melbourne as part of the Quad strategic partnership, Mr Blinken said the US would maintain its dual-track approach to Russia and the forces it has amassed at the border “unprovoked”.

That strategy involves the US keeping diplomatic dialogue open, while also building deterrences and defences if Russia chooses to invade.

“[We’ve been] making it clear to Russia that if it chooses the path of renewed aggression, it will face massive consequences,” Mr Blinken said in Melbourne on Friday after the fourth Quad alliance meeting.

An estimated 4000 foreign fighters, including Australians, have joined Ukraine’s militias and regular armed forces. Numbers are likely to boom if Russia invades.

Mr Blinken said what happened in Ukraine mattered in Australia and the Indo-Pacific region, in an apparent reference to China.

“What’s at stake is not simply, as important as it is, Ukraine’s territorial integrity. Its sovereignty, its independence,” he said.

“But very basic principles that have been hard fought for after two world wars, and a cold war: Undergirded security, peace and prosperity for countries around the world.

“If we allow those principles to be challenged with impunity, even if it’s half a world away, that will have an impact here as well. Others are watching. Others are looking to all of us to see how we respond.”

In an interview with Nine newspapers, Mr Bilken said he would expect Australia to play its role in imposing “massive costs” on Moscow should it invade.

He said the US and its allies were still ironing out what that would entail, but floated the prospect of economic and financial sanctions, export controls, and building up Ukraine’s armed forces and NATO defences.

Foreign Minister Marise Payne said she reiterated her “very deep concerns” about the presence of Russia’s military on the Ukrainian border, during the Quad meeting.

“We will continue to support our allies and partners to deter this sort of aggression and to raise the costs of this kind of behaviour,” she said.

‘Give it up, mate’: Backlash for McGowan after Dutton criticism
UK warns Russia to drop cold war rhetoric as talks on Ukraine intensify
Today's Stories