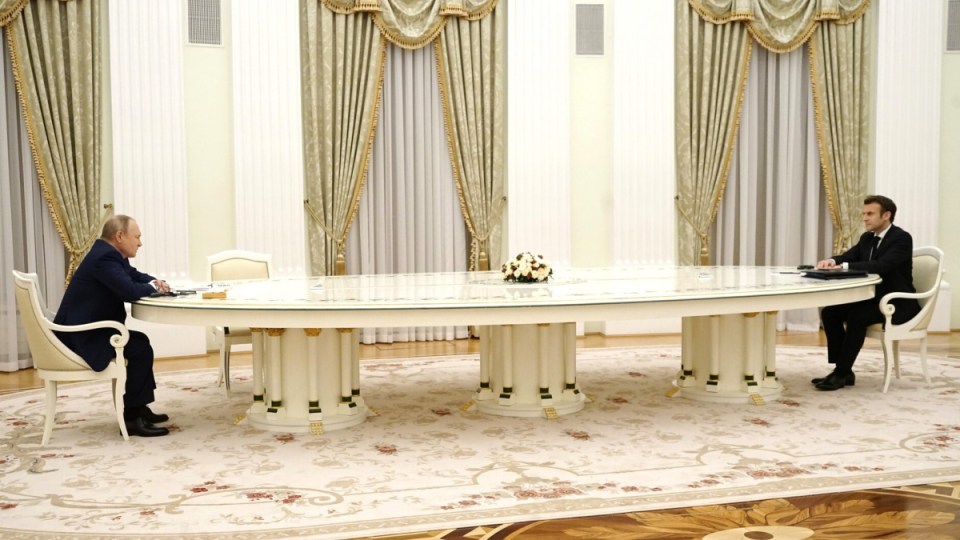 French President Emmanuel Macron, the first major European leader to visit Moscow since Russia began massing troops on the border with Ukraine, has told Vladimir Putin at the start of talks in the Kremlin he aims to avoid war and build trust.

Mr Macron, who is expected to seek re-election in April, has positioned himself as a potential mediator on Ukraine with France voicing scepticism about predictions from the US and Britain that a Russian assault is imminent.

Mr Macron told the Russian president he was seeking a “useful” response “that of course allows us to avoid war and to build bricks of trust, stability, visibility”.

Mr Putin, for his part, said Russia and France shared “a common concern about what is happening in the security sphere in Europe”.

“I see how much efforts the current leadership of France and the president personally is applying in order to solve the crisis related to providing equal security in Europe for a serious historical perspective,” he said.

On the eve of his trip to Moscow, Mr Macron told the Journal du Dimanche newspaper: “The geopolitical objective of Russia today is clearly not Ukraine but to clarify the rules of cohabitation with NATO and the EU.”

On his arrival, Mr Macron said: “I’m reasonably optimistic but I don’t believe in spontaneous miracles.”

Kremlin spokesperson Dmitry Peskov said ahead of the talks: “The situation is too complex to expect decisive breakthroughs in the course of one meeting.”

Russia has deployed more than 100,000 troops near Ukraine’s borders.

It denies planning an invasion but says it is ready to take unspecified “military-technical measures” if its demands are not met, including a promise by NATO never to admit Ukraine and to withdraw some troops from eastern Europe.

The US has rejected those demands as non-starters but says it is willing to talk about arms control and confidence-building steps, which Russian officials say are beside the point.

“In recent days there has been nothing new on the topic of security guarantees for Russia. Our Western interlocutors prefer not to mention this topic,” Mr Peskov said.

The US and its allies have ruled out defending Ukraine with military force but say they would respond to any invasion with sanctions, arms shipments and reinforcement of NATO countries nearby.

A US general arrived in Poland on Saturday and the bulk of the new forces due there were expected on Monday.

Germany announced on Monday it would deploy 350 troops to Lithuania to reinforce a NATO battle group there.

An influential Russian-backed separatist commander in eastern Ukraine urged Russia to send 30,000 soldiers to reinforce rebel forces fighting in the breakaway Donetsk region and to operate new weapons systems he hopes it will supply.

Another separatist leader said full-scale war could break out there at any time.

Ukraine says 15,000 people have been killed in fighting between government and separatist forces in the region since 2014.

In London, a spokesman for British Prime Minister Boris Johnson said Russian concerns about potential NATO aggression were “fundamentally unfounded as NATO is a defensive alliance at its heart”.

He said Britain wanted to work with Russia to provide it with reassurance on that point.

Russia, however, sees NATO’s addition of 14 new east European members since the Cold War ended three decades ago as an encroachment on its sphere of influence and a threat to its security.

German Foreign Minister Annalena Baerbock promised unequivocal support for Ukraine on Monday as she headed to Kiev for her second trip in three weeks.

Ms Baerbock was meant to meet Ukraine President Volodymyr Zelenskiy but that was called off due to a scheduling conflict, members of her delegation told the DPA news agency.