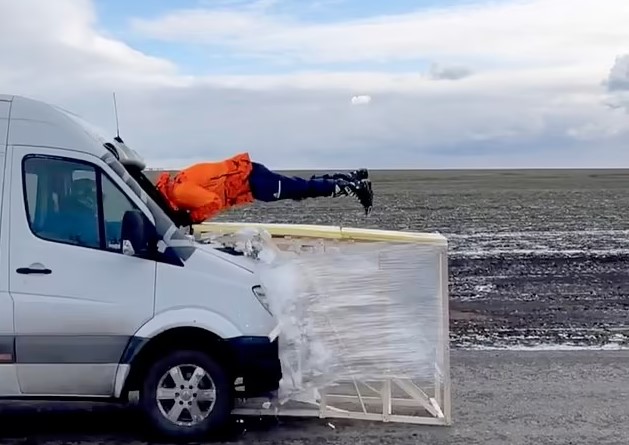 A Russian stuntman who broke his spine four months ago has returned with another terrifying feat. Photo: YouTube

Jackass Forever eat your heart out.

A Russian stuntman has returned in a viral video that showed the daredevil fly through a speeding bus – just months after breaking his spine in another stunt.

Evgeny Chebotarev, 30, was captured this week performing an incredibly dangerous stunt, filming himself being cannoned directly through a Mercedes minibus driving at 80km/h.

The jaw-dropping footage shows Chebotarev lying and waiting on a wooden frame, as the seven-metre minibus speeds straight at him.

The bus, built for the stunt with its front and rear cut open, shows passengers nonchalantly reading and enjoying the scenery as Chebotarev shoots past like a bullet before landing on the road.

Watch the daredevil’s minibus stunt below:

“I didn’t even notice how he flew by,” one of the passengers said.

According to British media, Chebotarev said after posting the video he was uninjured, despite his foot clipping the open windscreen during the stunt.

“I am sitting here trying to understand – was I Superman or Spiderman?” Metro reports him saying.

The Russian broke his spine in September 2021 after he attempted to jump a 40-metre gap across a river near the Ukraine border in a BMW.

“I will struggle to live a fulfilling life,” he said in a post from the hospital in September.

But the landscaper-turned-stuntman made a miraculous recovery in four months, maintaining his love for “extremes”.

Scott Morrison steps down after conceding defeat
Spain’s message to Djokovic: Get the jab
Today's Stories