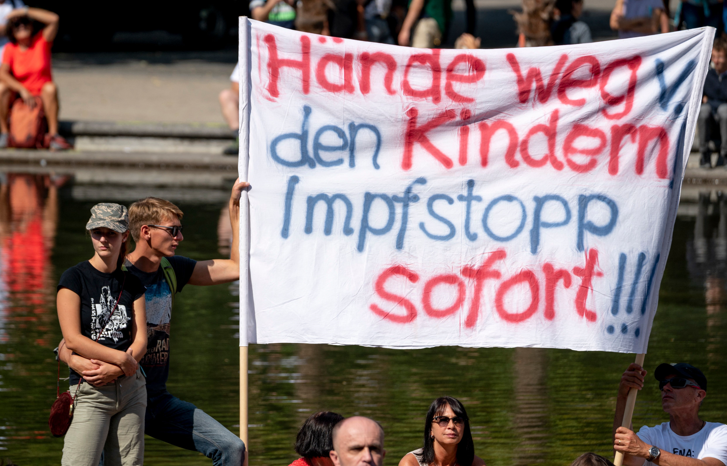 Protesters in Vienna demand an end to a vaccine campaign aimed at protecting children from the coronavirus. Photo: Getty

With jab rates stalled in the face of opposition from extreme right parties and agitators, Austria has threatened the most drastic action against vaccine sceptics seen outside China.

“We are about to stumble into a pandemic of the unprotected,” said Chancellor Alexander Schallenberg on Friday evening following a crisis meeting in the central European nation.

Schallenberg ruled out a lockdown for those who have been vaccinated or recovered from COVID-19 and said he hopes announcing the government’s plans to potentially restrict the movements of the unvaccinated will send a signal.

There are still too many “hesitators and procrastinators” he said, referring to those who have not yet made plans to receive a vaccine dose.

The right-wing populist Freedom Party, one of the country’s biggest political groups, also has been fuelling vaccine scepticism by noting that mass vaccination campaigns in Israel and elsewhere have seen second waves of infections as the vaccines become less effective over time.

About 220 of Austria’s intensive care beds are currently occupied by COVID-19 patients.

If this number climbs to 600, the country would reach phase five of its COVID plan, which requires massive restrictions on movement for the unvaccinated.

The seven-day incidence in the country is at just below 230 new infections per 100,000 people.

Earlier in the week it was announced that from November 1 most employees in Austria will have to prove they have been vaccinated, tested negative or recovered from the virus.

Around 62 per cent of Austria’s eligible population has been fully vaccinated, with the country of 8.92 million people having recorded 11,233 deaths as a result of the pandemic.

Momentum has stalled in the country’s vaccine campaign in recent weeks, with only a few thousand doses given on some days.

‘Give it up, mate’: Backlash for McGowan after Dutton criticism
Bars and gyms eyed as ongoing sources of NSW COVID cases
Today's Stories

Get jabbed or get locked up: Austria loses patience with vaccine dodgers