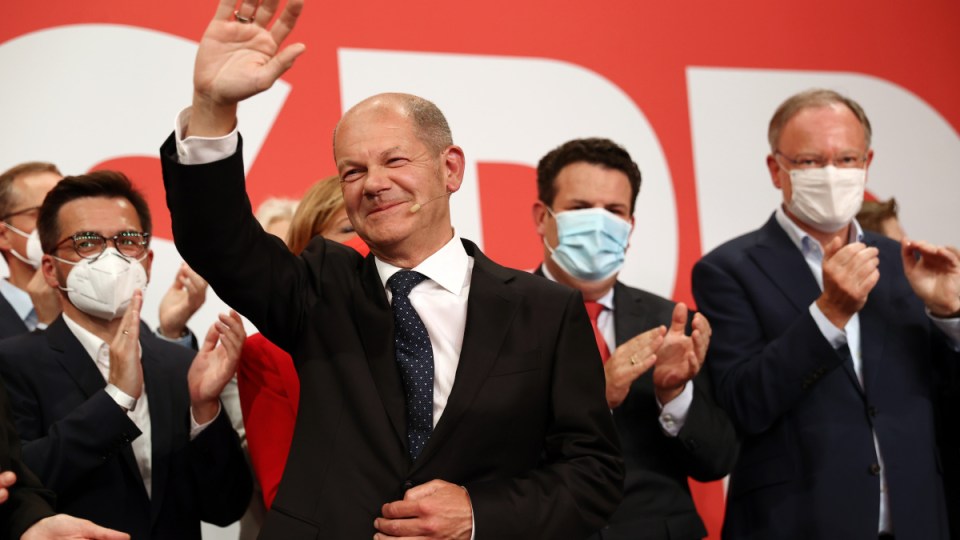 The Social Democrats of Olaf Scholz (centre) have won 25.9 per cent of vote in Germany's election Photo: Getty

Mrs Merkel – who has led Germany since 2005 – had already announced her plan to step down after the election, making the vote an era-changing event to set the future course of Europe’s largest economy.

Election officials announced early on Monday (local time) that a count of all 299 constituencies showed the Social Democrats (SPD) won 25.9 per cent of the vote, ahead of 24.1 per cent for the Union bloc.

The environmentalist Greens came third with 14.8 per cent, followed by the pro-business Free Democrats with 11.5 per cent.

The two parties have already signalled they are willing to discuss forging a three-way alliance with either of their two bigger rivals to form a government.

The far-right Alternative for Germany came fourth in Sunday’s vote with 10.3 per cent, while the Left party took 4.9 per cent.

For the first time since 1949, the Danish minority party SSW was set to win a seat in parliament, officials said.

Earlier in the night, the Social Democrats’ chancellor candidate, Olaf Scholz, described the vote as “an encouraging message and a clear mandate to make sure that we get a good, pragmatic government for Germany”.

Agreeing a new coalition could take months, and is likely to involve the Greens and liberal Free Democrats (FDP). Mrs Merkel will remain in the country’s top job until the negotiations are complete.

The SPD’s rise heralds a swing left for Germany and marks a remarkable comeback for the party. It has recovered some 10 points in support in just three months to improve on its 20.5 per cent result in the 2017 national election.

Mr Scholz, 63, would become the fourth post-war SPD chancellor after Willy Brandt, Helmut Schmidt and Gerhard Schroeder. Finance minister in Mrs Merkel’s cabinet, he is a former mayor of Hamburg.