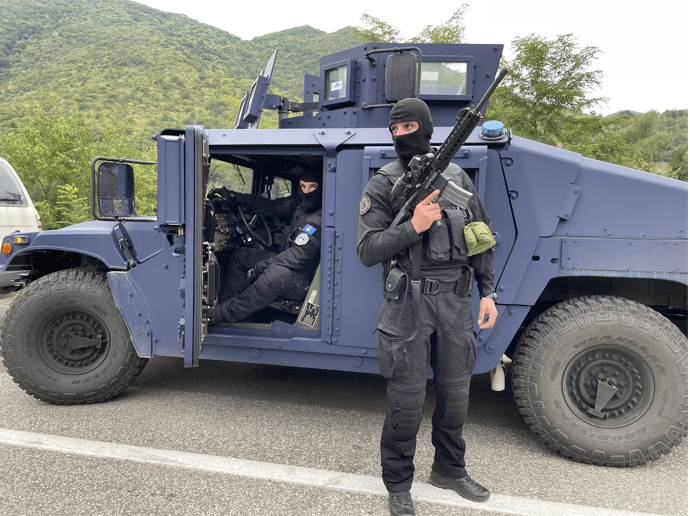 Kosovo’s Prime Minister Albin Kurti has accused neighbouring Serbia of “provoking a serious international conflict”, with tensions between the two countries at their highest for years.

In the latest flashpoint, two interior ministry offices in northern Kosovo were on Saturday attacked near border crossings blocked by local Serbs angered by a ban on cars with Serbian licence plates entering the country.

There was no mention of any casualties.

Serbs from Kosovo’s north have blocked two main roads near the border since the government ban went into force on Monday.

Drivers from Serbia must now use temporary printed registration details that are valid for 60 days.

The Kosovo government says its move mirrors measures in force in Serbia against drivers from Kosovo since 2008, when Kosovo declared independence from their neighbour.

Serb fighter planes flew close to the border crossing of Jarinje where protesters cheered them. A day before, three helicopters also flew in the vicinity.

Media in Belgrade reported that tanks and other military equipment were heading towards the border, but the Serb army did not give any details.

NATO’s mission in Kosovo, where peacekeepers maintain a fragile peace, called for restraint.

“Serbia clearly wants to militarise and escalate the situation. It is bringing close to the border Russian-made helicopters and airplanes,” Kosovo’s Prime Minister Albin Kurti told a news conference.

He accused Serbia of “encouraging and supporting” individuals to attack the state of Kosovo.

The two countries committed in 2013 to a dialogue sponsored by the European Union to try to resolve outstanding issues but little progress has been made.

Kosovo’s independence is recognised by some 110 countries including Australia, the United States, Britain and most Western states, but not by Russia, Serbia’s traditional ally, and five EU member states.