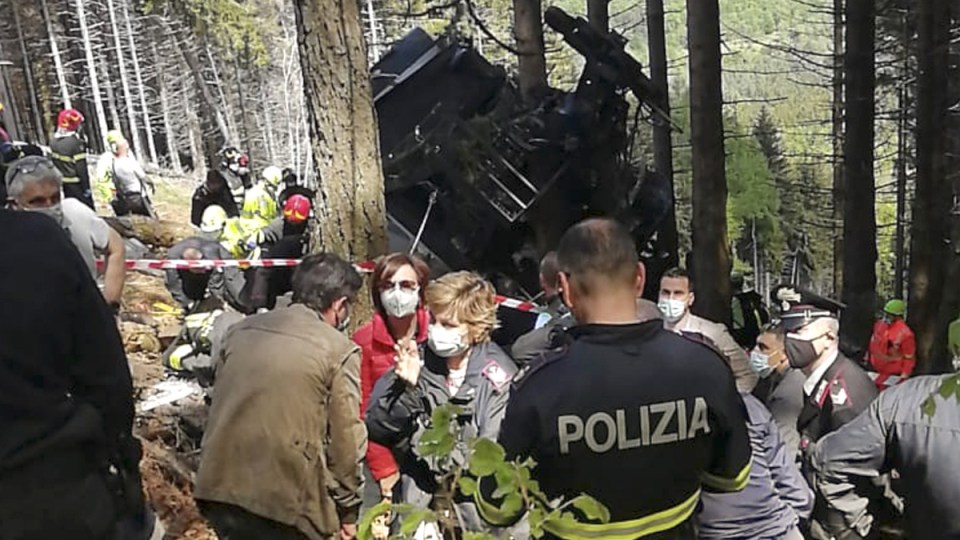 Rescuers on the scene of the fallen cable car, where 14 people died. Photo: AAP Photo: AAP

The five-year-old boy who is the lone survivor of a cable car disaster that killed 14 people in Italy remains in a Turin hospital with multiple broken bones.

The Israeli foreign ministry identified him as Eitan Biran.

His parents, younger brother and two great-grandparents were among the dead, the ministry said, correcting an earlier statement that had included Eitan among the victims. The family lived in Italy.

Italian media has identified all the other victims as residents of Italy.

“There is great hope for the life of Eitan, we have hope,” he said afterwards.

Italy’s transport minister has vowed to find the cause of the gondola crash that occurred when a cable apparently snapped and the cabin careened back down the mountain until it came off the line and crashed to the ground.

Italian prosecutors have opened an investigation into suspected involuntary manslaughter and negligence.

“We are starting from the empirical evidence. The cable sheared and the system of safety brakes clearly did not work,” public prosecutor Olimpia Bossi said.

The disaster, in one of the most picturesque spots in northern Italy – the Mottarone mountaintop overlooking Lake Maggiore and other lakes near Switzerland – has raised fresh questions about the quality and safety of Italy’s transport infrastructure.

Transport Minister Enrico Giovannini visited the site on Monday (local time) and announced a commission of inquiry to investigate the “technical and organisational causes” of the accident, while prosecutors will focus on any criminal blame.

Mr Giovannini said from Stresa, the lakefront town at the foot of the Mottarone peak, that the aim of the investigative commission would be to “ensure this never happens again”.

The transport ministry said a preliminary check of the cable line’s safety and maintenance record showed the whole lift structure was renovated in August 2016, and that a full maintenance check was done in 2017.

Late in 2020, inspections were performed on the cables themselves, including magnetic inspections on the primary cables of the lift: The cable that pulls the cabin up the mountain, the support cable that holds the car and the rescue cables. In December another visual check was performed, the ministry said.

The mayor of Stresa, Marcella Severino, quoted witnesses as saying they heard a “loud hiss”, apparently when the lead cable snapped. She said the cabin reeled back down the line until it apparently hit a pylon and then plummeted to the ground. It rolled over several times before crashing into trees, she said.

It wasn’t immediately clear why a brake had not engaged.

Some of the bodies were thrown from the car and were found amid the trees, rescue workers said.

The cable car reopened only a few weeks ago, after the end of Italy’s long coronavirus-inspired lockdown.