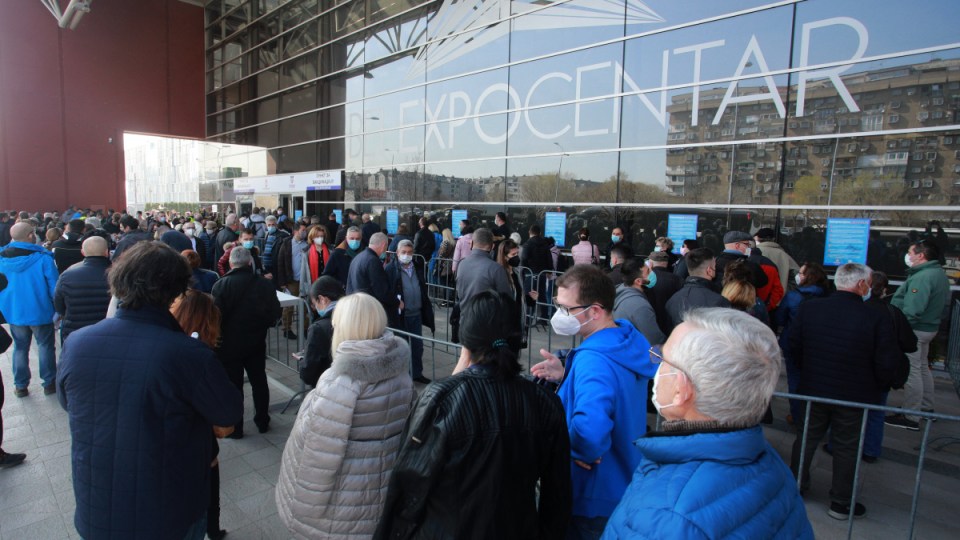 There were long queues of people from Serbia's neighbouring countries, lining up for virus vaccination. Photo: Getty

Serbia has vaccinated thousands of citizens from neighbouring Bosnia-Herzegovina, North Macedonia, Montenegro and Croatia against COVID-19 over the weekend.

On Saturday, 9600 vaccinations were administered to foreigners from the region in the capital Belgrade, Nikola Nikodijevic, the president of Belgrade city council, told Serbian cable TV Vesti.

Another 8500 vaccinations were planned for Sunday.

Citizens from neighbouring countries were also injected in the cities of Novi Sad and Nis, according to media reports.

According to Bosnian media reports, long traffic jams had already formed at the border crossings between Bosnia and Serbia on Saturday morning.

Many citizens of Bosnia and North Macedonia expressed their gratitude to Serbia on social media.

In the two smaller Balkan countries, vaccinations to protect against illnesses caused by the coronavirus have barely got off the ground.

The Serbian government took pains to present the vaccination campaign as a planned measure for business people from the entire region to boost regional trade relations.

The Serbian Chamber of Commerce has concluded agreements with partner organisations for this purpose.

But this is contradicted by media reports and reports on internet platforms.

According to these reports, it was sufficient to show a Bosnian passport at the vaccination stations in order to receive a vaccination without an appointment.

Mr Nikodijevic, a local politician, admitted that many “business people” had brought their relatives with them and that in the end no one had been turned away.

Serbia is doing relatively well in terms of COVID-19 vaccinations: By Sunday, 20 per cent of the population had received at least one vaccination and 13 per cent had also received a second.

The country, with a population of almost 7 million, is using Russian and Chinese vaccines on a massive scale in addition to US and European ones.