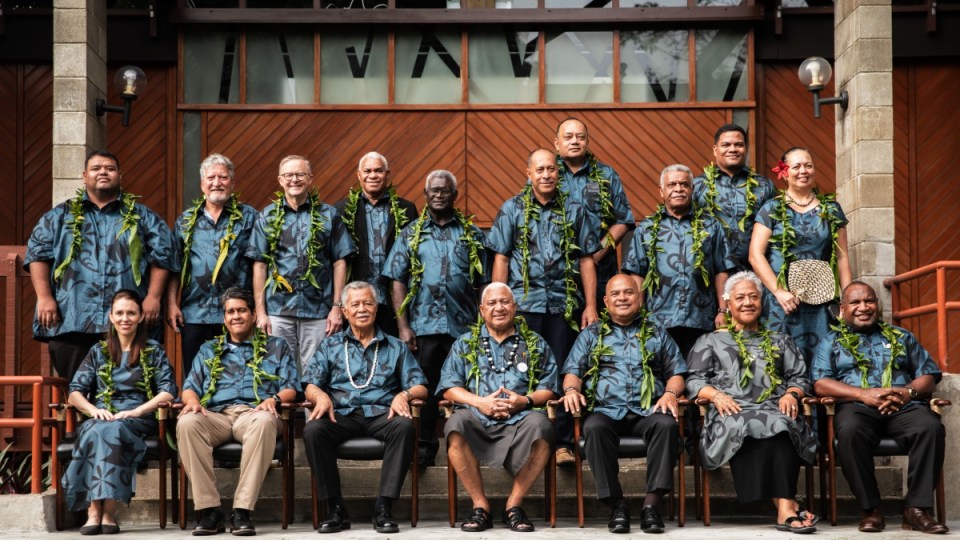 Pacific leaders have declared a climate emergency and committed to bringing back Kiribati. Photo: AAP

The Pacific’s scorecard for Australia’s new climate policy is in: An improved effort but must do better.

The critique of the Albanese government’s emissions reduction plan is included in the Pacific Islands Forum’s final communique, seen by Australian Associated Press prior to its release on Friday.

The communique follows much diplomacy at the forum in the Fijian capital, Suva, this week, which included a closed-door leaders’ retreat on Thursday to discuss the region’s most pressing issues.

Mr Albanese was in a bubbly mood as he addressed journalists in Suva, claiming Pacific unity was strong.

“Our partnerships have been strengthened by this meeting, it was really constructive the way that we dealt with each other,” he said on Friday, ahead of returning to Australia.

“There was a good spirit of cooperation and dialogue, speaking about our common interests.

“Australia’s new position on climate change was particularly well-received, and that is reflected in the communique.”

That much is true, with a specific clause referencing Australia’s renewed ambition following the May election of the Labor government.

Australia had to step up following the previous forum in Tuvalu in 2019 when it was accused of abandoning the region to the impacts of climate change.

However, the clause only tells half the story.

In a document where precise language matters, forum leaders fell short of supporting Australia’s bid to host a United Nations Climate Change Conference on behalf of the Pacific.

The leaders “welcomed”, rather than supported, “the interest from Australia to host a United Nations Framework Convention on Climate Change Conference of the Parties in partnership with Pacific Island countries”.

Officials who were not authorised to speak publicly said the intention was to be warm toward Australia’s commitments, but not too warm.

Another clause in the communique pointedly urged all forum nations to deliver “clear progress on turning pledges and commitments into action, consistent with the 1.5 degrees pathway”.

Australia’s current emissions target – a 43 per cent reduction by 2030 – falls short of that pathway.

The leaders, many of whom are confronting an existential threat from a warming planet, declared a climate emergency.

“Australia’s new climate pledge is a step-up that Fiji has long sought – but out of the duty I owe every young person in the Pacific, I have urged [Mr Albanese] to go further for our family’s shared future by aligning Australia’s commitment to the 1.5-degree target,” he posted.

“You can’t tell Pacific nations you’re serious about tackling the climate emergency, and bid to host the world’s most important climate summit, while continuing to fuel the flames by approving massive new gas projects,” he said.

“The science could not be clearer.”

Pacific unity was another key topic for leaders, heightened by Kiribati’s damaging withdrawal from the regional body on the eve of the summit.

Australia and New Zealand will fund the Suva Agreement, which reforms the forum and new diplomatic efforts to bring Kiribati back to the fold.

“The people and government of Kiribati will always be a part of the Blue Pacific Family and [the forum is] committed to continue to dialogue towards a resolution to restore the unity of the Forum Family,” the communique said.

Australia and New Zealand will also be pleased by a commitment to “family first” security in the Pacific.

The trans-Tasman allies sought as much from the Solomon Islands in the wake of its security deal with China, signed in April.

In Fiji, Solomons Prime Minister Manasseh Sogavare ruled out a Chinese military base and embraced Mr Albanese with a hug.