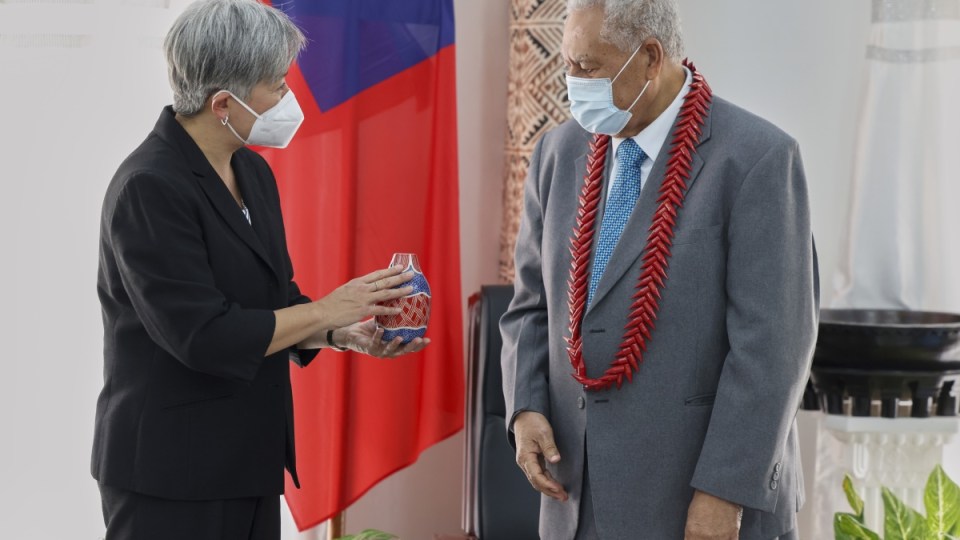 Penny Wong hands a gift to Samoa's president during a diplomatic visit to the Pacific nation. Photo: AAP

Senator Wong, who is visiting Samoa as part of her second trip to Pacific Island nations since taking over as Foreign Minister less than a fortnight ago, has also pledged a replacement Guardian class patrol boat for Samoa to assist with maritime surveillance in the region.

Samoa’s last patrol boat, the Nafanua II, ran aground on a reef in August 2021. Its absence has left a gaping hole in the island nation’s maritime surveillance capabilities.

“We do understand how important these maritime assets are to island nations,” Senator Wong said at a joint media briefing with Samoa’s Prime Minister Fiame Naomi Mata’afa in Apia on Thursday.

Ms Fiame maintains any regional issues should instead be put before the Pacific Islands Forum for consultation.

“It just seemed a bit abnormal because the [Chinese] minister of foreign affairs was here, and there was this particular proposal from the Chinese that they were seeking regional agreement on,” Senator Wong said.

“Our position was that you cannot have regional agreement when the region hasn’t met to discuss it.”

She said while sovereign nations were free to make their own decisions, issues that impacted regional security needed collective consideration.

“Your Prime Minister has shown a lot of leadership and wisdom not only now but in many of the statements about the importance of robust regional architecture [and] respectful, regional processes to deal with some of the external circumstances we all find ourselves in,” Senator Wong said.

Senator Wong will move on to Tonga on Friday.

Her twin visits to the Pacific come within days of China signing bilateral agreements with Samoa and Tonga and alongside a 10-country travel blitz through the region by China’s Foreign Minister Wang Yi.

While China has signed bilateral agreements with some Pacific nations, the Asian powerhouse has put a region-wide security deal on ice.

Beijing instead set out a position paper on the Pacific, covering areas such as security and development, along with greater dialogue and diplomatic ties.

There was a welcome for Australia’s policy shift on climate change, which has brought it more into line with its Pacific neighbours and is likely to strengthen its ties with the region.

“Climate change, of course, is very high on the priorities of both our respective governments,” Ms Fiame said.

“Senator, with your policy stance we are greatly encouraged.

“With the new Australian government, the policy shift brings them closer into alignment with the Pacific’s advocacy for climate change.

“We feel that this will strengthen the Pacific’s position on climate change.”

Meanwhile, the European Union’s special envoy to the region said Australia, the US and Europe needed to step up their engagement on climate change, investment and COVID-19 aid in the Pacific.

Gabriele Visentin said the bloc was working with its partners to increase its presence and support the region’s growth in a sustainable manner.

Engagement on climate change, investment in connectivity within the Pacific and strengthening vaccination efforts and COVID-19 aid were all areas where partnerships can be stronger, Mr Visentin said in Canberra on Thursday.

“It’s not a matter of increasing influence. It’s a matter of becoming a credible partner who treats the Pacific island states as sovereign countries able to take sovereign decisions for their long-term interests,” he said.

“We welcome our partners like the US and Australia addressing the Pacific states with respect.

“Showing them that we have a complete empathy and understanding of their needs proves effective.”