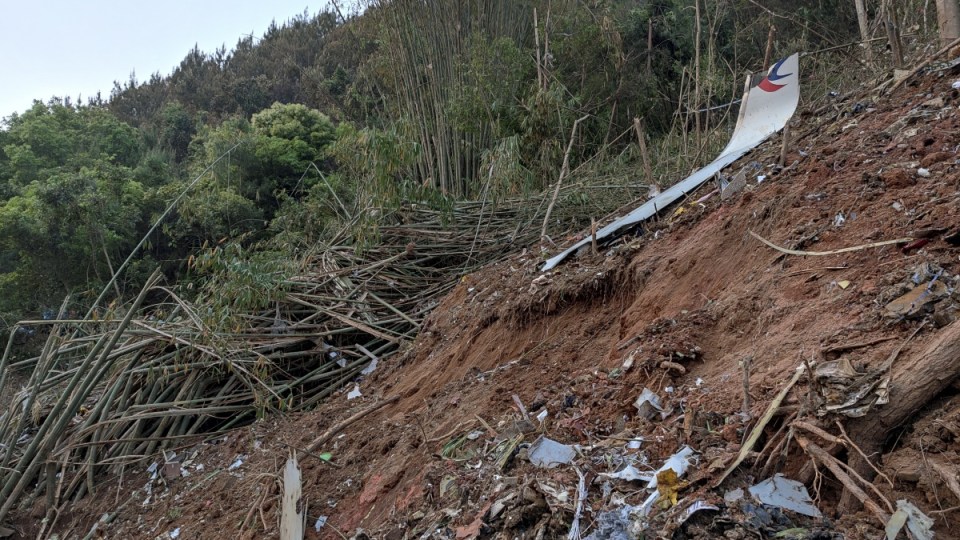 A photo, released by Xinhua News Agency, of wreckage from the downed China Eastern flight, which has believed to have killed 132 people. Photo: AAP

A witness has described seeing a plane “falling directly from the sky in front of him”, as more details emerge about the shocking Boeing crash in China.

“The plane fell vertically from the sky. Although I was very far away, I could still see that it was a plane. The plane did not smoke during the fall. The fire started after it fell into the mountain, followed by a lot of smoke,” the witness, identified only by his surname, Liu, has told Beijing Youth Daily.

“My heart was thumping. I immediately informed friends about the situation, that this area is dangerous and not to come nearby,” he said.

Rescuers continued on Tuesday to search in the heavily forested mountains of China’s southern Guangxi region for survivors of the China Eastern Airlines jet crash, with state media describing the situation as “grim”.

Parts of the Boeing 737-800 jet were found on Monday strewn across mountain slopes charred by fire after China’s first crash involving a commercial plane since 2010.

The six-year-old plane was en route from the south-western city of Kunming, capital of Yunnan province, to Guangzhou, capital of Guangdong, bordering Hong Kong, when it crashed.

A group from the Chinese aviation regulator has been deployed to the crash site, along with local fire, rescue and paramilitary forces.

Wet weather is forecast this week where the plane crashed.

In describing the difficult terrain, state media said the crash site was hemmed in by mountains on three sides, with access along just one tiny path.

Another witness, from Molang village in Tengxian county – near the scene of the crash – told China News Services that he had seen “wings and pieces of the plane, as well as pieces of clothing hanging from trees”.

The man, whose name was not revealed, rode his motorbike to the crash site after hearing “a huge explosion” about 2.40pm to “see if he could participate in the rescue”. He said the crash caused “about 10 acres (four hectares) of fire”.

Media cited a rescue official as saying the plane had disintegrated and caused a fire destroying bamboo trees.

Other footage posted online and shared by state media outlet People’s Daily show plumes of smoke billowing from a mountainous, forested area. Another clip shows what appears to be wreckage from the plane on a muddy mountain path.

The Civil Aviation Administration of China said the aircraft lost contact over the city of Wuzhou.

China Eastern said the cause of the crash – in which the plane descended at 31,000 feet a minute, according to flight tracking website FlightRadar24 – was under investigation.

Video footage from a vehicle’s dashcam has emerged apparently showing a jet diving to the ground behind trees at an angle of about 35 degrees off vertical.

The airline said it deeply mourned the passengers and crew, without specifying how many people had been killed.

State media has described the situation as appearing “grim”, with the possibility of all onboard perishing unable to be ruled out.

The People’s Daily quoted a provincial firefighting department official as saying there was no sign of life among the debris.

State media showed a piece of the plane on a scarred, earthen hillside.

There was no sign of a fire or personal belongings.

Boeing said it was ready to assist China Eastern and was in contact with US transportation safety regulators over the incident.

ADS-B is a technology that allows aircraft to be tracked.

Crashes during the cruise phase of flights are relatively rare even though this phase accounts for the majority of flight time.

Boeing said last year only 13 per cent of fatal commercial accidents globally between 2011 and 2020 occurred during the cruise phase, whereas 28 per cent occurred on final approach and 26 per cent on landing.

“Usually the plane is on auto-pilot during cruise stage. So it is very hard to fathom what happened,” said Li Xiaojin, a Chinese aviation expert.

Online weather data showed partly cloudy conditions with good visibility in Wuzhou at the time of the crash.

President Xi Jinping called for investigators to determine the cause of the crash as soon as possible, state broadcaster CCTV reported.

Boeing said in a statement that its thoughts were with the passengers and crew.

“Boeing is in contact with the US National Transportation Safety Board and our technical experts are prepared to assist with the investigation led by the Civil Aviation Administration of China,” the company said.

China Eastern grounded its fleet of 737-800 planes after the crash, state media reported.

China Eastern has 109 of the aircraft in its fleet, according to FlightRadar24.

The 737-800 has a good safety record and is the predecessor to the 737 MAX model that has been grounded in China for more than three years after fatal crashes in Indonesia and Ethiopia.

China’s airline safety record has been among the best in the world for a decade.

‘No signs of life’ from devastating China plane crash