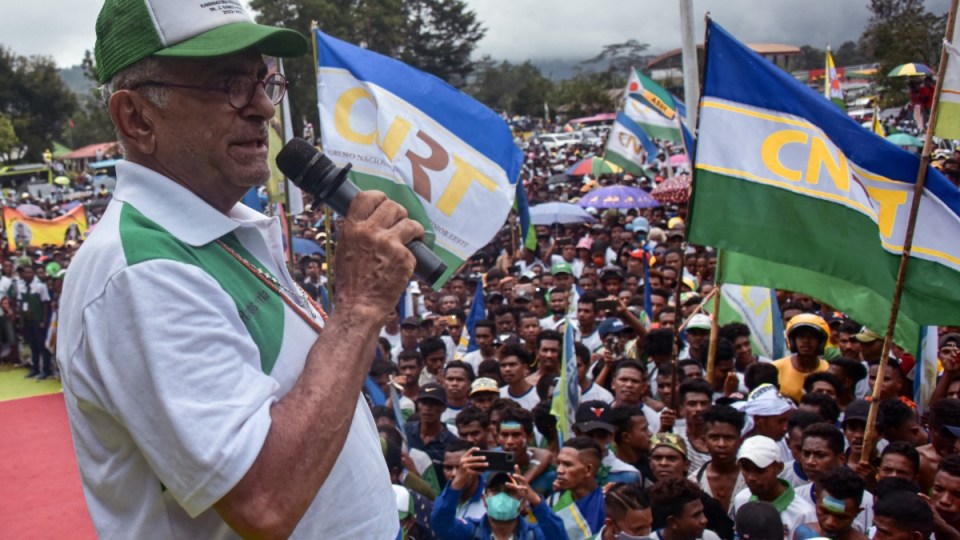 Surveys suggest Jose Ramos-Horta is in the lead ahead of East Timor's presidential election. Photo: Getty

Thousands of people in East Timor have flocked to presidential campaign rallies days before an election that will test the young country’s stability amid a protracted political crisis and economic uncertainty.

Supporters of incumbent Francisco “Lu-Olo” Guterres filled the Tasitolu field in the capital Dili, wearing red shirts and waving banners and flags of Mr Guterres’ party – the Revolutionary Front for an Independent East Timor, known by its local acronym Fretilin.

Mr Guterres, 67, a former guerrilla leader, is running against 15 other candidates, including four women.

Surveys showed Mr Guterres and former president Jose Ramos-Horta, a Nobel peace prize laureate, are the front-runners, with Mr Ramos-Horta in the lead.

Mr Ramos-Horta, 72, announced he would run again in January, a decade after his first term ended.

He’s backed by the National Congress of the Reconstruction of East Timor, known as CNRT. It is led by former Prime Minister Xanana Gusmao, an ex- resistance leader who remains influential.

Indonesia’s military and pro-Indonesian militias responded to the independence referendum with scorched earth attacks that devastated the East Timorese half of the island.

The young country has had a rocky infancy, with a moribund economy reliant on a dwindling offshore oil revenues and bitter factional politics that has occasionally erupted into violence.

In the past four years, continuing tensions between the two largest parties, Fretilin and CNRT, led to the resignation of Prime Minister Taur Matan Ruak in February 2020 after repeatedly failing to pass a budget.

Mr Ruak agreed to stay on until a new government was formed and to oversee the battle against the coronavirus pandemic with a $US250 million ($347 million) war chest.

His government has operated without an annual budget and has relied on monthly injections from its sovereign fund savings.

Mr Guterres refused to swear in almost all cabinet nominees in 2018, so the government is made up of ministers from two smaller parties and several portfolios remain vacant.

CNRT has accused Mr Guterres and Fretilin of acting unconstitutionally and illegally seizing the post of Speaker of parliament.

Fretilin said that Mr Horta was not competent to be president, accusing him of causing a crisis as prime minister in 2006 when dozens were killed as political rivalries turned into open conflict on the streets of Dili.

A clash between Fretilin and CNRT supporters also broke out in 2018, leaving more than a dozen injured and cars torched.

“I will not create a new crisis but I want to restore our constitution and promote dialogue with all political parties in my first mandate,” Mr Horta said.

He ended his campaign rally on Tuesday, a day earlier to avoid potential clash between rival supporters.

More than 835,000 of the country’s 1.3 million people are registered to vote on Saturday. The day also marks the 20th anniversary of East Timor’s independence from Indonesia, which had invaded the former Portuguese colony in 1975.

If none of the candidates secures more than 50 per cent of the votes in the first round, a run-off between the top two is scheduled for April 19.

Leaders including Mr Gusmao, who was East Timor’s first president from 2002 to 2007, and prime minister from 2007 to 2015, have focused on big-ticket infrastructure projects to develop the economy, funding them from a dwindling supply of former oil riches.

But little progress has been made in rural areas, where nearly 70 per cent of East Timorese live.

The United Nations estimates nearly half the population lives below the extreme poverty line of $2.62 a day and half the children under the age of five suffer physical and mental stunting as a result of malnutrition.