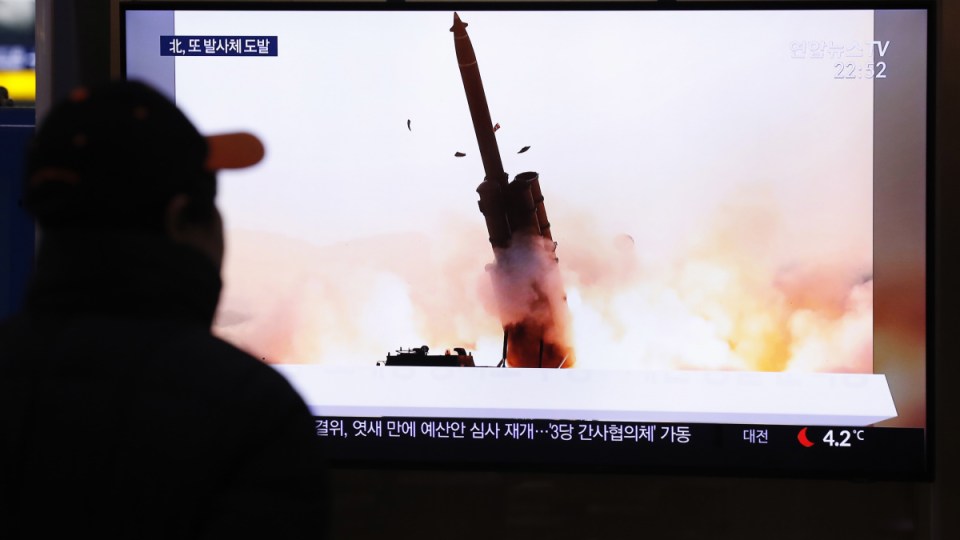 North Korea is reving its missile program while the world focuses on Russia's war on Ukraine. Photo: AAP

North Korea has exploited the world’s attention being focused on Ukraine to test fire another missile, the latest in a growing series of launches amid a prolonged freeze in nuclear negotiations with the United States.

South Korea’s Joint Chiefs of Staff confirmed the detection of a single launch of a presumed ballistic missile from an area near the North Korean capital of Pyongyang toward the country’s eastern waters.

It was the ninth in North Korea’s latest series of missile tests since the start of the year as it continues to use a pause in diplomacy to expand its military capabilities while attempting to pressure the Biden administration for concessions.

The latest launch came about a week after South Korea and Japan said they detected the North firing a ballistic missile on Sunday that was tracked flying about 300 kilometres at a maximum altitude of about 600 kilometres.

The North later said that launch was designed to test a camera system it plans to install on a spy satellite that is under development.

The North’s other tests this year included a purported hypersonic missile and its first launch since 2017 of an intermediate range missile potentially capable of reaching Guam, a major US military hub in the Pacific.

Analysts say North Korea could up the ante in coming months and possibly resume its testing of major weapons like intercontinental ballistic missiles as it tries to move the needle with Washington, which is now preoccupied with Russia’s invasion of Ukraine and regional competition with China.

During a ruling Workers Party conference called by North Korean leader Kim Jong Un last month, Politburo members issued a veiled threat to resume the tests of nuclear devices and ICBMs, which Kim had unilaterally suspended in 2018 to make room for diplomacy with then-President Donald Trump.

But negotiations remain derailed after the collapse of Trump and Kim’s second meeting in February 2019, when the Americans rejected North Korea’s demands for major sanctions relief in exchange for dismantling an ageing nuclear facility, which would have amounted to a partial surrender of its nuclear capabilities.

The Biden administration has offered open-ended talks with Pyongyang but shown no willingness to offer economic benefits unless the North takes real steps to cut down its nuclear weapons and missile program.