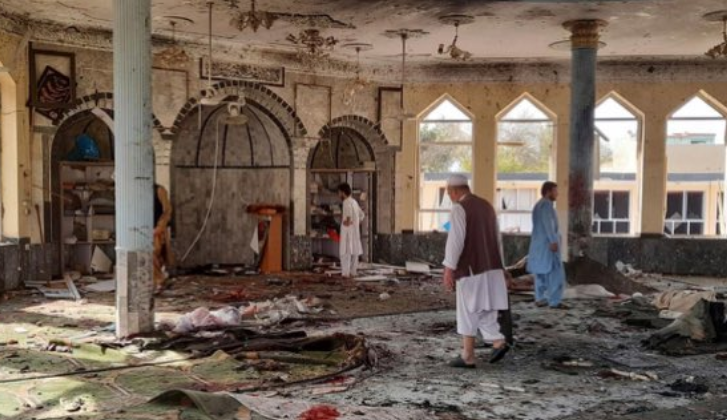 On the same day Australia began the long-awaited first Test series in Pakistan, the horrific terror bombing of a Shi’Ite mosque in the northwest city of Peshawar is a reminder why it was almost 25 years since Australia’s First XI last toured the country.

Ambulances rushed through narrow and congested streets carrying the wounded to Lady Reading Hospital. The death toll will likely rise as many of the wounded are in critical condition, Mr Khan said.

One attacker and one policeman were killed in the gunfight, and another police officerl was wounded. The remaining attacker then ran inside the mosque and detonated a bomb.

At least 150 worshippers were inside the mosque at the time of the explosion, which further underlines the long-standing enmity between Pakistan’s dominant Sunni majority and Shia minority.

No one immediately claimed responsibility for the blast, but both the Islamic State group and a violent Pakistani Taliban organisation have carried out similar attacks in the region, located near the border with neighbouring Afghanistan.

Shayan Haider, a witness, had been preparing to enter the mosque when a powerful explosion threw him to the street.

“I opened my eyes and there was dust and bodies everywhere,” he said.

At the Lady Reading Hospital Emergency department, there was chaos as doctors struggled to move the many wounded into operating theatres.

Hundreds of relatives gathered outside the emergency department, many of them wailing and beating their chests, pleading for information about their loved ones.

Retired army officer Sher Ali who had been inside the mosque at the time of the explosion was injured by flying shrapnel. He made a impassioned plea to the Pakistani government for better protection of the country’s minority Shi’Ite Muslims.

“What is our sin? What have we done? Aren’t we citizens of this country?” he said from within the emergency department, his white clothes splattered with blood.

Pakistan authorities have said they would put all the stops to keep Australia’s first XI safe for the duration of the month-long tour.

“The Australian team has been granted the status of state guest,” Omer Saeed, City Police Officer for the Pakistani city of Rawalpindi, told the ABC.

“This status is only granted to world leaders or a PM or president coming from all over the world.

Meanwhile, Australia have been left to rue the decision to go without a second spinner in Rawalpindi after Pakistan went to stumps at 1-245 on day one of the first Test.

On a wicket with no grass that is proving particularly slow, Australia endured their hardest day opening in the field in more than three years.

Pakistan opener Imam-ul-Haq was the star for the hosts on one of their biggest days of cricket in decades, scoring his maiden Test ton with 132no.

He combined in 105 and 140-run stands with Abdullah Shafiq (44) and Azhar Ali (64no), with the latter on track for his third century against Australia.

More worrying than the score for Australia will potentially be the surface.

They are set to bat fourth on a wicket that already showed signs of staying low, with Pakistan playing two spinners to their one in Nathan Lyon.

After more than a decade as Thor, Hemsworth still embracing his hammer and humour
Why Rod Marsh was a legendary figure far beyond the cricket pitch
Today's Stories