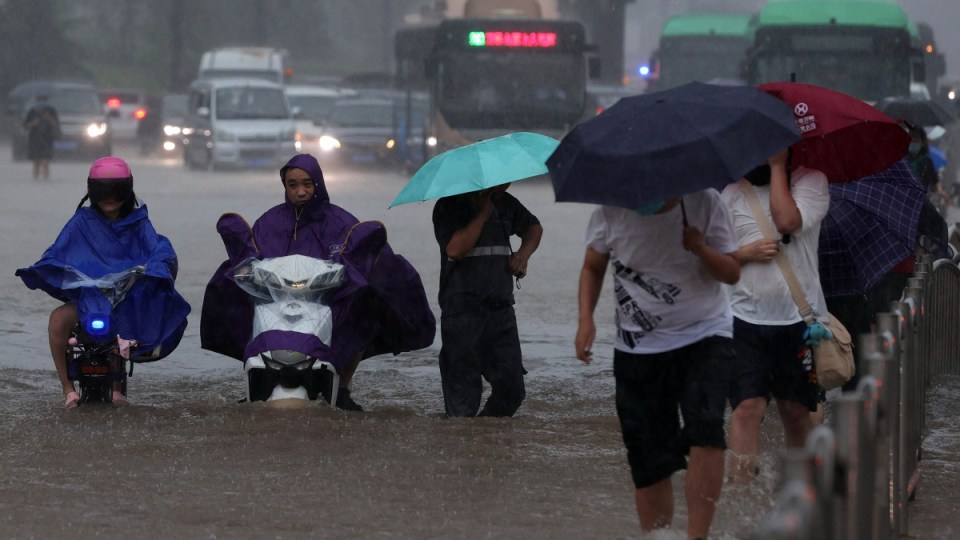 People wade through flood waters on a street after heavy rain in Zhengzhou. Photo: Getty

Large swathes of China’s central Henan province are under water, with its capital Zhengzhou hardest hit after being drenched by what weather forecasters said was the heaviest rain in 1000 years.

In Zhengzhou, a city of more than 12 million on the banks of the Yellow River, 12 people have died so far amid the floods, and about 100,000 people have been evacuated to safe zones, the official Xinhua agency reported on Wednesday, citing the local government.

The lives of millions of people in Henan have been upended since the weekend in an unusually active rainy season that has led to the rapid rise of a number of rivers in the vast Yellow River basin.

Many train services across Henan, a major logistics hub in central China, have been suspended. Many highways have also been closed and flights delayed or cancelled.

Roads in a dozen populous cities have been flooded. Videos on social media showed residents, their arms interlocked, wading across streets in fast-moving water. One video showed an adult and a child being swept away on a major artery choked with half-submerged vehicles.

From the night of Saturday until late Tuesday, 617.1 millimetres of rain drenched Zhengzhou – almost on par with the city’s annual average of 640.8 millimetres.

The level of rainfall in Zhengzhou seen over the three days was the kind of thing that happened only “once in 1000 years”, local media cited meteorologists as saying.

Dramatic video shared on social media on Tuesday showed commuters chest-deep in murky floodwaters on a lightless subway train and an underground station turned into a large, churning pool.

Dozens of reservoirs and dams have also breached warning levels.

Overnight, local authorities said the rainfall had caused a 20-metre breach in the Yihetan dam in the city of Luoyang west of Zhengzhou, and that the dam “could collapse at any time”.

In Zhengzhou, the local flood control headquarters said the city’s Guojiazui reservoir had been breached.

On Wednesday, Zhengzhou’s transportation system remained paralysed, with schools and hospitals cut off by severe water-logging, according to state media.

Some children have been trapped in their kindergartens since Tuesday.

The First Affiliated Hospital of Zhengzhou – a large treatment centre with more than 7000 beds – has lost all power, and even backup supplies were down, the People’s Daily reported on Wednesday.

The hospital was racing to find transport to relocate about 600 critically ill patients, according to the report.

Heavy rain is forecast to persist through Wednesday, though precipitation will continue across the province for the next three days.

Michelle Grattan: Morrison’s defeat is a victory for Independents, and the Greens
India deaths estimated to be ‘10 times’ official toll
Today's Stories