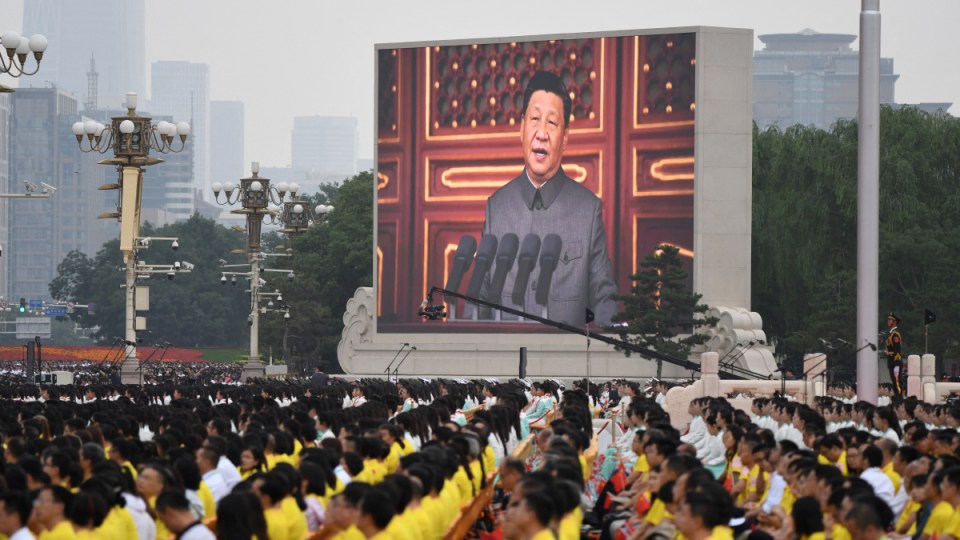 The Chinese President spoke for an hour from Tiananmen square Photo: Getty

Chinese President Xi Jinping has warned foreign countries attempting to bully his nation will “get their heads bashed”.

Speaking during an hour-long televised address from Tiananmen Square on Thursday, Mr Xi hailed a “new world” created by the Chinese people as China’s Communist Party marked the centenary of its founding.

After watching fighter jets form a “100” in a flyby, the President pledged to build up China’s military, committed to the “reunification” of Taiwan and stressed the autonomy held by Hong Kong and Macau.

“The people of China are not only good at destroying the old world, they have also created a new world,” Mr Xi said, China’s most powerful leader since Mao Zedong.

He added that “we will never allow anyone to bully, oppress or subjugate China”.

Mr Xi and the CCP are riding high as China recovers briskly from the COVID-19 outbreak and takes a more assertive stand on the global stage.

But Beijing faces external criticism over its clampdown in Hong Kong and treatment of ethnic minorities in Xinjiang, and contends with a worsening demographic outlook that imperils long-term economic growth.

The people of China would never allow any foreign force to bully, oppress, or subjugate them, Mr Xi said.

“Anyone who dares try to do that will have their heads bashed bloody against the Great Wall of Steel forged by over 1.4 billion Chinese people,” he said, sparking applause from the audience gathered in the square in central Beijing.

Since then, China has undergone massive changes – but some of these milestones were conspicuously missing in the propaganda drive.

Events including the Cultural Revolution purges, the 1989 Tiananmen Square protests, and the Hong Kong pro-democracy protests were ignored, the AFP news agency reported.

Thursday’s celebrations began with a flyby of fighter jets and helicopters observed by the nation’s leaders, seated at the southern ramparts of the Forbidden City.

China would build its military to safeguard its sovereignty, security and development, elevating it to world-class standards, Mr Xi said in his address.

“We must accelerate the modernisation of national defense and the armed forces,” said Mr Xi, who is also chairman of the Central Military Commission.

No one should underestimate the resolve of the Chinese people to defend China’s sovereignty and territorial integrity, he said.

Resolving the Taiwan question and realising China’s complete “reunification” was an “unswerving historical task” of the party, Mr Xi said.

“All sons and daughters of China, including compatriots on both sides of the Taiwan Strait, must work together and move forward in solidarity, resolutely smashing any ‘Taiwan independence’ plots,” he said.

On Hong Kong and Macau, Mr Xi said their social stability will be ensured, while protecting China’s sovereignty, security, and development interests.

“We will stay true to the letter and spirit of the principle of ‘One Country, Two Systems’, under which the people of Hong Kong administer Hong Kong, and the people of Macau administer Macau, both with a high degree of autonomy,” Mr Xi said.

The Chinese Communist Party, which came to power in 1949 under Mao, initially recruited peasants and workers, but has evolved to embrace markets and entrepreneurship under “socialism with Chinese characteristics” while retaining a Leninist model of authoritarianism.

On Monday, Mr Xi presided over theatrical performances at the “Bird’s Nest” Olympic Stadium in a show attended by thousands and that state media described as “epic”.

At the end, the audience rose to sing a song, Without the Communist Party, There Would Be No New China.

Mr Xi said any attempt to divide the party from the Chinese people or to set the people against the party was bound to fail.

“The more than 95 million party members and the more than 1.4 billion Chinese people will never allow such a scenario to come to pass,” Mr Xi said.