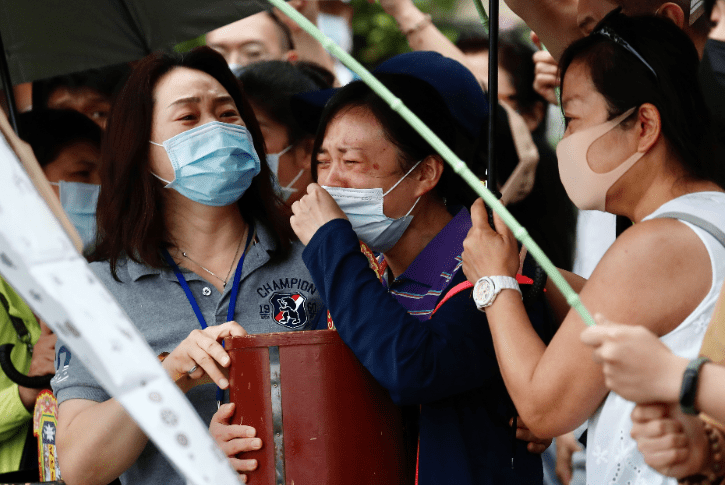 Relatives of the dead and missing dissolve in tears as the hunt for bodies continues. Photo: EPA Photo: EPA/ Ritchie Tongo

Two Australians have been treated for minor injuries following a deadly train crash in Taiwan that has left at least 50 dead in the country’s worst rail accident in seven decades.

The Department of Foreign Affairs and Trade was checking with Taiwanese authorities as to if any other Australians were involved, a spokesperson said on Saturday.

The train was carrying almost 500 people on its way from Taiwan’s capital, Taipei, to Taitung on the east coast when it derailed in a tunnel just north of Hualien.

While authorities continue to search the train’s tangled wreckage for more bodies, Taiwanese prosecutors have charged the construction site manager with causing the accident.

Prosecutors had applied to a court to detain the manager on charges of causing death by negligence and forged documents, a justice ministry official told reporters on Saturday.

But a court in Hualien released the manager, Lee Yi-hsiang, on a bond of $T500,000 ($A23,000), although it restricted him from leaving Taiwan and ordered him to stay in Hualien.

Yu Hsiu-duan, head of the Hualien prosecutors’ office, said an appeal would be filed.

“The court said there was no reason to keep him in custody,” she told reporters. “The court changed it to a surety of $T500,000.”

Workers on Saturday began moving the train’s rear portion, which was relatively unscathed as it had stopped outside the tunnel and away from the accident spot.

However, other mangled sections remained in the tunnel, where fire department official Wu Liang-yun said more bodies were likely to be found.

“This shows the good side of Taiwanese society,” she said.

The government has ordered flags flown at half-mast for three days in mourning, while the de facto French embassy in Taipei confirmed that one of its citizens had died in the crash.

Taiwan’s foreign ministry said one US citizen was among the dead and another was missing.

The accident happened at the start of a long holiday weekend. The train was packed with tourists and residents going home for the traditional Tomb Sweeping Day to clean the graves of ancestors.