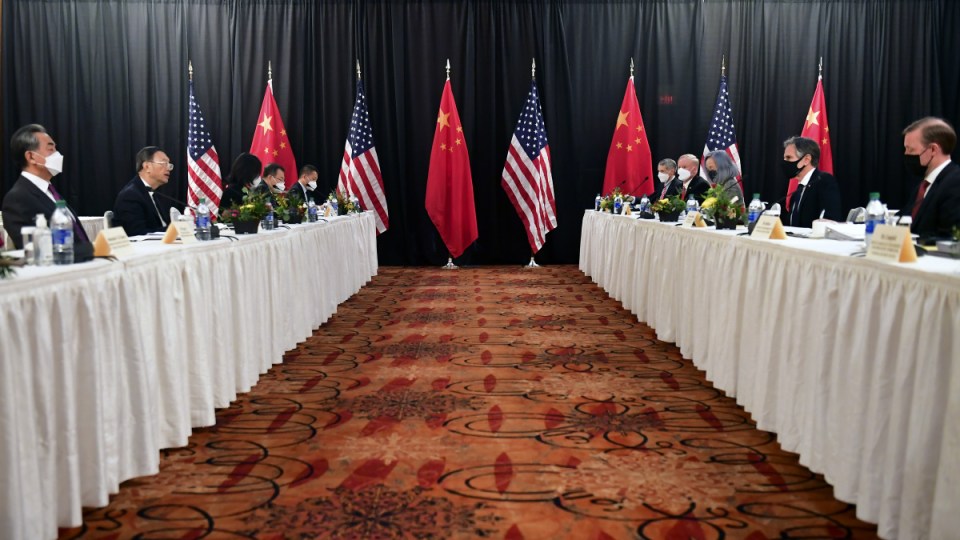 China and US negotiators face off. Photo: AAP

Senior US and Chinese officials have concluded what Washington has called “tough and direct” talks in Alaska which laid bare the depth of tensions between the world’s two largest economies at the outset of the Biden administration.

The run-up to the talks in Anchorage, which followed visits by US officials to allies Japan and South Korea, was marked by a flurry of moves by Washington that showed it was taking a firm stance, as well as by blunt talk from Beijing warning the United States to discard illusions that it would compromise.

“We expected to have tough and direct talks on a wide range of issues, and that’s exactly what we had,” White House national security adviser Jake Sullivan told reporters on Friday moments after the Chinese delegation left the hotel meeting room.

US Secretary of State Antony Blinken, standing beside Sullivan, said he was not surprised that the US got a “defensive response” from China after it raised its concerns over Chinese human rights abuses in Xinjiang, Tibet, and Hong Kong, as well as over cyber attacks and pressure on Taiwan.

Members of China’s delegation left the hotel without speaking to reporters.

“I am very proud of the secretary of state,” President Joe Biden told reporters at the White House on Friday.

In recent weeks, top Republicans have been in favour of efforts by Mr Biden to revitalise relations with US allies in order to confront China.

Mr Biden has partially staked his approach on China to rebuilding American domestic competitiveness, and several top Republicans, whose cooperation will be crucial to the success of those plans, backed his administration in the face of the heated exchanges from the first day of talks.

“I have many policy disagreements with the Biden Administration, but every single American should unite against Beijing’s tyrants,” Republican Senator Ben Sasse said in a statement.

Earlier, US officials clashed on camera with their Chinese counterparts in the first face-to-face talks between the two nations since Joe Biden became US President.

The deeply strained relations between the two global rivals were on rare public display at the meeting’s opening session in Anchorage, Alaska, on Friday (Australian time).

The Biden administration told their Chinese counterparts that the relationship between the countries would be one of “stiff competition.”

Beijing answered with allegations of hypocrisy and bullying.

The historic meeting began with what was supposed to be a simple photo op with two American and two Chinese officials making brief remarks to kick off two days of hotly anticipated talks. But it quickly dissolved into a remarkable hour-long back-and-forth of verbal attacks and accusations.

The US, which quickly accused China of grandstanding and violating the meeting’s protocol, had been looking for a change in behaviour from China, which earlier in 2021 had expressed hope for a reset to sour relations.

On the eve of the talks, Beijing had presaged what would be a contentious meeting, with its ambassador to Washington saying the US was full of illusions if it thought China would compromise.

“We will discuss our deep concerns with actions by China, including in Xinjiang, Hong Kong, Taiwan, cyber attacks on the United States, economic coercion of our allies,” Mr Blinken said in blunt public remarks.

“Each of these actions threaten the rules-based order that maintains global stability.”

Mr Yang responded with a 15-minute speech in Chinese – while the US side awaited translation – blasting what he said was the US’s struggling democracy, poor treatment of minorities and criticising its foreign and trade policies.

“The United States uses its military force and financial hegemony to carry out long arm jurisdiction and suppress other countries,” Mr Yang said.

“It abuses so-called notions of national security to obstruct normal trade exchanges, and incite some countries to attack China.

“Let me say here that in front of the Chinese side, the United States does not have the qualification to say that it wants to speak to China from a position of strength.

“The US side was not even qualified to say such things, even 20 years or 30 years back, because this is not the way to deal with the Chinese people.”

Apparently taken aback by Mr Yang’s remarks, Mr Blinken held journalists in the room so he could respond.

Mr Sullivan said the US did not seek conflict with China, but would stand up for its principles and friends. He touted the Mars rover landing success, and said the US’s promise was in its ability constantly reinvent itself.

After the public show, the two delegations even tussled about when media would be ushered out of the room.

Following the exchange, a senior US administration official said China had immediately “violated” agreed-to protocol, which was two minutes of opening remarks by each of the principals.

“The Chinese delegation seems to have arrived intent on grandstanding, focused on public theatrics and dramatics over substance,” the official said.

The US would continue with its meeting as planned, the official said, adding that “exaggerated diplomatic presentations often are aimed at a domestic audience”.

Before taking office, Mr Biden had been attacked by Republicans who feared his administration would be soft on China.

But in recent weeks, top Republicans have given the President a gentle nod for revitalising relations with US allies to confront China, a shift from former president Donald Trump’s go-it-alone “America First” strategy.

While much of Mr Biden’s China policy is still being formulated, including how to handle the tariffs on Chinese goods implemented under Mr Trump, his administration has so far placed a stronger emphasis on democratic values and allegations of human rights abuses by China.