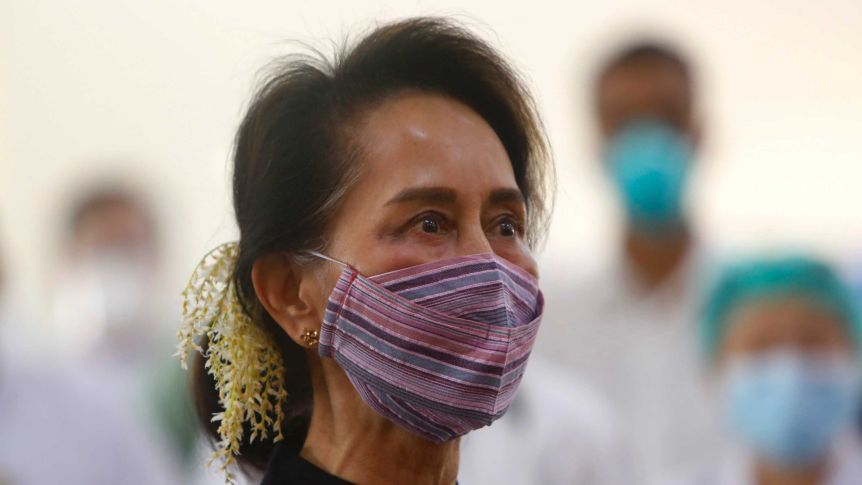 Aung San Suu Kyi was arrested by the military hours before a new session of Parliament was due to open. Photo: AP/Aung Shine Oo

As news of Aung San Suu Kyi’s arrest broke in the early hours of Monday morning, it sent a shudder around much of Myanmar.

The South-East Asian nation had been a democracy (albeit a fragile one) since 2011, after almost 50 years of military rule.

Suddenly that was under serious threat.

Within hours of the arrests of Ms Suu Kyi, President Win Myint and several other senior figures of the National League for Democracy (NLD) Party, the country’s powerful military confirmed it was taking control once more.

It said it had carried out the detentions in response to “election fraud”, handing power to military chief Min Aung Hlaing and imposing a state of emergency for one year.

Aung San Suu Kyi, who spent 15 years under house arrest in the struggle to bring democracy to Myanmar, now finds herself back in familiar territory: Under military detention.

And judging by the statement she wrote ahead of Monday’s events, calling for people to “protest against the coup by the military”, she knew it was coming.

‘It was galling for the military’

It was an even bigger landslide than her party’s 2015 win in the country’s first free and fair elections for decades.

On Monday morning the NLD should have begun its second term in office, which would have enshrined the election result.

“83 per cent [of the vote] was embarrassing, it was galling for the military,” Professor John Blaxland from the Australian National University told the ABC.

“It came to the point where it was coming to a head for the military and [Aung San Suu Kyi] was going to assume a level of political power that was simply intolerable for the commander-in-chief and the Tatmadaw, the Burmese military.”

Of the 476 seats in Myanmar’s Parliament the NLD won 396, well above the 322 needed to secure a majority.

There has been little evidence to support those accusations and independent observers have said the vote was free and fair.

After days of tension, attempts by the NLD to negotiate with the military as late as Sunday night came to nothing.

Regardless of how many seats were won by whom, the military has a relatively tight grip on power in Myanmar.

The constitution, which the military wrote in 2008, guarantees it 25 per cent of the seats in Parliament, including control of key ministries such as defence, home affairs and immigration.

Despite this, Dr Blaxland said the NLD’s resounding election victory made them uneasy.

“Even though she went out of her way to back them over the abuse of the Rohingya people in Rakhine state over the last few years and was vilified for being so supportive of the military.

“Despite all of that they’ve still gone and done this so that speaks volumes about the change [of] dynamics geo-strategically, and not just politically, inside Myanmar.”

Ms Suu Kyi publicly backed the military’s crackdown on the Rohingya Muslim minority during her appearance at the International Court of Justice in 2019.

She said an “internal armed conflict” was the real reason for the “displacement” of thousands of Rohingya.

It was a stance that prompted condemnation from around the world, but at home in Myanmar her position only boosted her popularity.

Her awkward relationship with the army she supported through that period, has now evaporated entirely.

It’s not known where Ms Suu Kyi or the other detained NLD members are being held or what their condition is.

It’s also unclear what will happen next in Myanmar.

Supporters of the military celebrated the coup, parading through Yangon in pickup trucks and waving national flags.

“Today is the day that people are happy,” one nationalist monk told a crowd in a video published on Facebook.

But democracy activists and NLD voters were horrified and angry.

“Our country was a bird that was just learning to fly, now the army broke our wings,” student activist Si Thu Tun said.

Dr Blaxland said he expected people to heed Ms Suu Kyi’s call to come out and protest over the coming days, because they fear “more repression, less freedom for the press, and less political freedom” under military rule.

“We’re looking at a fairly bleak road ahead for democracy,” he said.