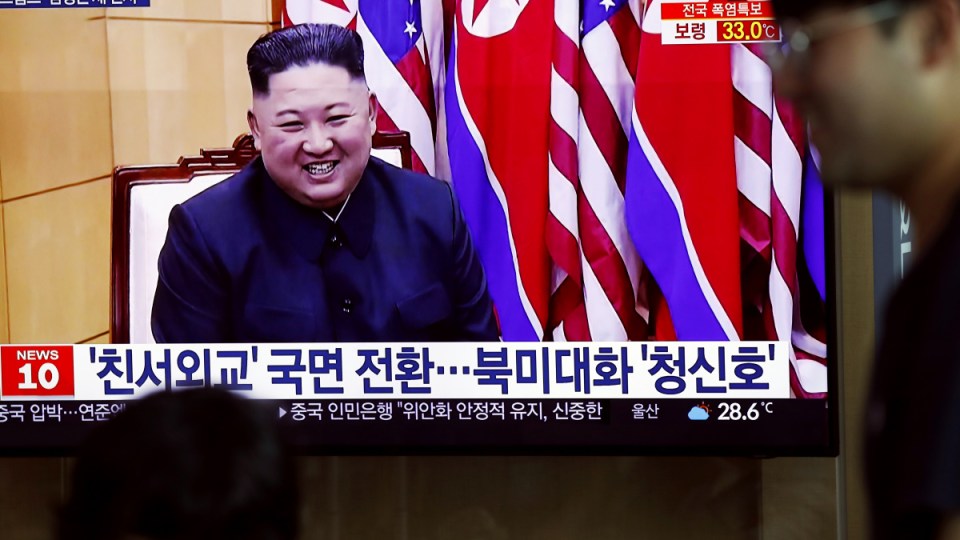 Normally, not a day goes by without news of Kim Jong-un dominating official broadcasts. Lately, though, no news at all. Photo: AAP

Intrigue and rumour are swirling once again about the fate of North Korean leader Kim Jong-un, with unconfirmed reports of his death or permanent incapacitation leading news bulletins across Asia.

Hong Kong Satellite Television, which claims to have links to a member of the reclusive nation’s ruling clan, reported a ‘very solid source’ had confirmed the 36-year-old was dead.

The network said he passed away on Saturday night (local time) in a Pyongyang hospital.

In Japan, weekly news magazine Shukan Gendai asserted its sources were saying the North Korean dictator was as good as dead, reporting that failed heart surgery had left him in a permanent vegetative state.

What the world does know is that there have been no sightings of the tubby tyrant since April 11, an absence from the public eye made even more curious by a lack of mentions in official broadcasts out of Pyongyang, where Kim’s announcements and activities are normally a daily staple.

Instead, the Hermit Kingdom’s tightly controlled media focused on marking the 88th anniversary of the birth of the Korean People’s Revolutionary Army (KPRA) on April 25 – a celebration at which Kim has previously appeared to review the massed military parade.

Further boosting international speculation is China’s confirmation that it had dispatched a team of doctors and officials to North Korea “to advise on” Kim.

The delegation, led by a senior member of the Chinese Communist Party’s International Liaison Department, left Beijing for North Korea on Thursday, Reuters reported, saying it had confirmed the mission with three sources.

And to further cloud whatever is happening in Pyongyang, Time magazine is reporting that a surveillance satellite has captured images of Kim’s private train being prepared to leave his holiday compound on North Korea’s east coast.

The satellite photos released by 38 North, a website specialising in North Korea studies, don’t say anything about Kim’s potential health problems, and they echo South Korean government intelligence that Kim is staying outside of the capital, Pyongyang.

Seoul has also repeatedly indicated that there have been no unusual signs that could indicate health problems for Kim.

That hasn’t stopped growing and unconfirmed rumors and media reports about Kim’s health that have emerged since he missed an April 15 commemoration of the 108th birthday of his grandfather and North Korea founder, Kim Il Sung.

Kim Jong Un is the third generation of his family to rule North Korea, and he hadn’t missed the April 15 event, one of the year’s most important for the North, since assuming power after his father Kim Jong Il’s death in late 2011.

Kim’s health is of crucial importance because of worries that the serious illness or death of a leader venerated with near godlike passion by millions of North Koreans could cause instability in the impoverished but nuclear-armed country.

Many experts in South Korea downplayed speculation that Kim is seriously ill.

They also said North Korea won’t likely face a serious immediate turmoil even if Kim is incapacitated or dies because someone else, such as his influential sister Kim Yo-jong, will quickly step in, though the prospect for the North’s long-term political future would be unclear.

Kim Jong Un’s train has been parked at the Leadership Railway Station servicing his Wonsan compound since at least April 21. The website said that the approximately 250-metre train wasn’t present on April 15 but was observed on both April 21 and 23.

“The train’s presence does not prove the whereabouts of the North Korean leader or indicate anything about his health, but it does lend weight to reports that Kim is staying at an elite area on the country’s eastern coast,” it said.

North Korea exerts extremely tight control on information about its leadership, making it virtually impossible for outsiders to find out what’s going on at those senior levels.

It’s not the first time that Kim has vanished from the public eye, and past absences in state media dispatches have also triggered speculation about his health.

In 2014, state media didn’t report any public activities for Kim for about six weeks, before he reappeared with a cane.

A riddle wrapped in an enigma, the state of Kim’s health became front-page news on April 20, when CNN reported he had died.

The revived reports of Kim’s demise prompted an emphatic denial from the Korean Friendship Association (KFA), a Pyongyang-backed organisation that serves as one of the regime’s overseas propaganda arms.

Meanwhile, online wits have been pumping out memes.

Is Kim Jong-un dead? Yes, no, maybe – take your pick from a slather of conflicting reports