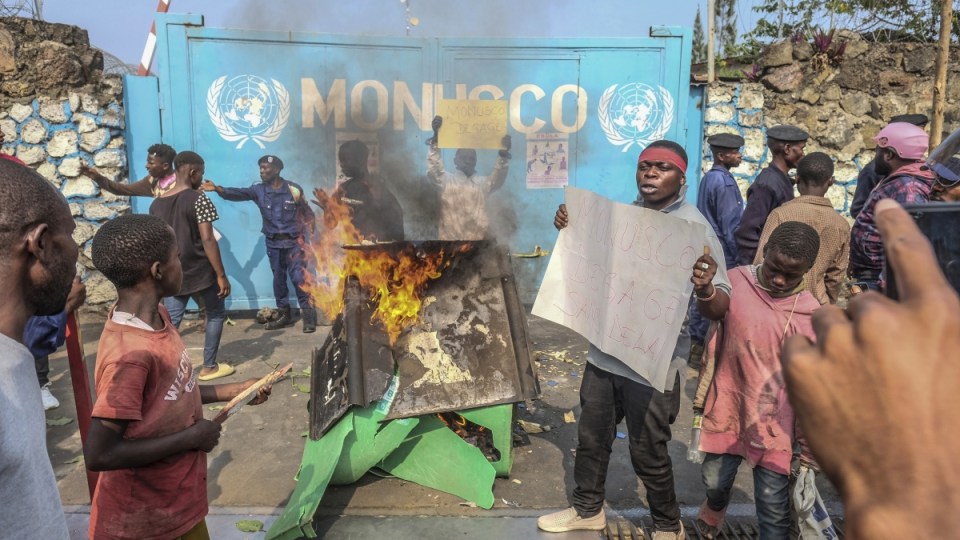 Protests demanding the withdrawal of a UN mission from DR Congo have left at least 15 people dead. Photo: AAP

Three United Nations peacekeepers and at least 12 civilians have been killed during a second day of anti-UN protests in eastern Democratic Republic of Congo.

The protests were spurred by complaints that the UN mission, known as MONUSCO, has failed to protect civilians against militia violence which has raged for years.

UN Secretary-General Antonio Guterres condemned the violence, deputy UN spokesman Farhan Haq said in a statement, adding, “He underscores that any attack directed against United Nations peacekeepers may constitute a war crime and calls upon the Congolese authorities to investigate these incidents and swiftly bring those responsible to justice”.

Demonstrations began on Monday in the city of Goma and spread on Tuesday to Butembo, where a UN soldier and two UN police with the mission were shot dead, Mr Haq told reporters in New York.

In both cities UN peacekeeping troops were accused of retaliating with force as hundreds of protesters threw rocks and petrol bombs as they vandalised and set fire to UN buildings.

In Butembo at least seven civilians were killed and an unknown number wounded, said the city’s police chief Paul Ngoma.

UN peacekeeping missions have been beset by accusations of abuse for years.

“Obviously if there’s any responsibility by UN forces for any of the injuries, or any of the deaths, we will follow up on that,” Mr Haq said.

UN forces were advised to use tear gas to disperse protesters and only fire warning shots if needed, he said.

The protests were called by a faction of the ruling party’s youth wing, which has demanded the UN mission withdraw over what it describes as its ineffectiveness.

Resurgent clashes between local troops and the M23 rebel group in eastern Congo in recent months have displaced thousands.

Attacks by militants linked to Islamic State have also continued despite a year-long state of emergency and joint operations against them by the Congolese and Ugandan armies.

“We have been doing our utmost, not just for years, but really for decades to try to bring stability to Eastern Congo,” said Mr Haq, adding that UN peacekeeping chief Jean-Pierre Lacroix is expected to travel to Congo as soon as he can.

MONUSCO took over from an earlier UN operation in 2010.

The mission had more than 12,000 troops and 1600 police deployed as of November 2021, and has been gradually withdrawing for years.

Protesters also stormed the houses of UN workers in Goma, spurring the mission to relocate its staff to camps.

India’s foreign minister said two of the peacekeepers who died were Indian. Mr Ngoma said the third was Moroccan.