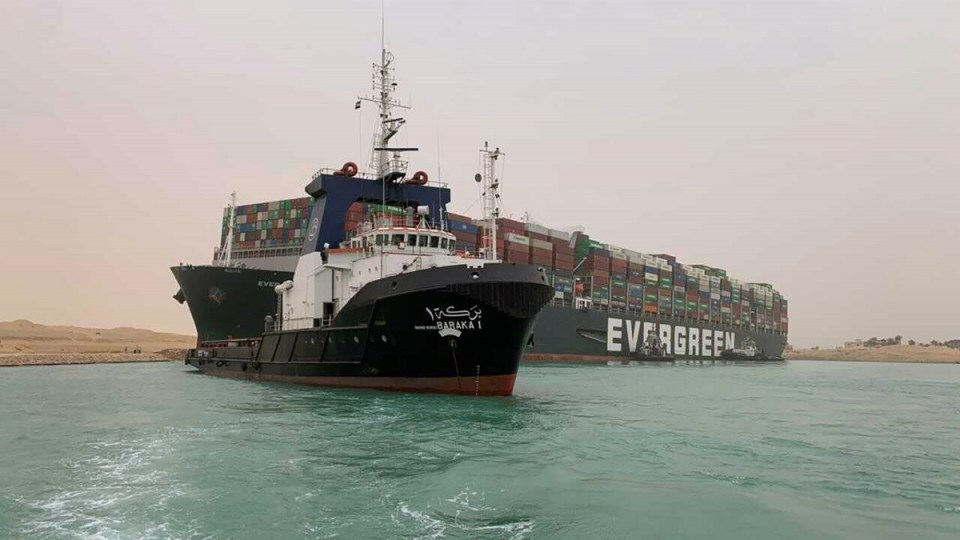 The container ship Ever Given is still blocking one of the world's busiest shipping shortcuts. Photo: AAP

The shortest shipping route from Europe to Asia remains blocked for a second day as 10 tug boats struggle to free one of the world’s largest container ships after it ran aground.

The 400-metre, 224,000-tonne Ever Given ran aground in the Suez Canal on Tuesday morning (local time) after losing the ability to steer amid high winds and a dust storm, the Suez Canal Authority said.

About 30 per cent of global container shipping volumes pass through the canal each day, carrying everything from fuel to consumer goods.

The main alternative route for ships travelling between Asia and Europe, around the African cape, takes a week longer to navigate.

Attempts are being made to dig the skyscraper-sized Ever Given ship out, as well as move it with tugs. But it remains unclear when the canal – which is particularly crucial for world transport of oil – will be cleared.

Images showed the ship’s bow was touching the eastern wall, while its stern looked lodged against the western wall – an extraordinary event that experts said they had never heard of happening before in the canal’s 150-year history.

Photos showed a digger removing earth and rock from the bank of the canal around the ship’s bow.

An official said work to release the ship could continue into the night, weather permitting.

The SCA’s chairman told local media that despite the blockage, a southbound convoy was on the move and that the authority was trying to keep traffic flowing between waiting areas as best it could while salvage efforts continued.

“Once we get this boat out, then that’s it, things will go back to normal. God willing, we’ll be done today,” chairman Osama Rabie said.

The authority was considering compensation for delayed ships, he said.

There are also fears idling ships could become targets for attacks

About 12 per cent of world trade by volume passes through the canal and it is a major source of hard currency for Egypt.

Tracking maps had shown the ship grounded in the southernmost stretch of the waterway, between the Great Bitter Lake and the Red Sea port of Suez.

At least 30 ships were blocked to the north of the Ever Given and three to the south, local sources said.

Several dozen ships could also be seen grouped around the northern and southern entrances to the canal.

The SCA said it was trying to rebalance the ship and local sources said efforts could shift towards digging the ship out if the tug boats were unable to release it.

The refloating operation was temporarily suspended late on Wednesday and was to resume early Thursday, according to canal service provider Leth Agencies.

It wasn’t immediately clear what caused the ship to become wedged on Tuesday morning. GAC, a global shipping and logistics company, said the ship had experienced a blackout without elaborating.

Taiwan’s Evergreen Marine Corp, which leases the vessel, said the owner had told it the ship “was suspected of being hit by a sudden strong wind, causing the hull to deviate from [the] waterway and accidentally hit the bottom”.

World oil prices rose more than 2 per cent on Wednesday.

It is the second major crash involving the Ever Given in recent years. In 2019, the cargo ship ran into a small ferry moored on the Elbe river in the German port city of Hamburg. Authorities at the time blamed strong wind for the collision, which severely damaged the ferry.