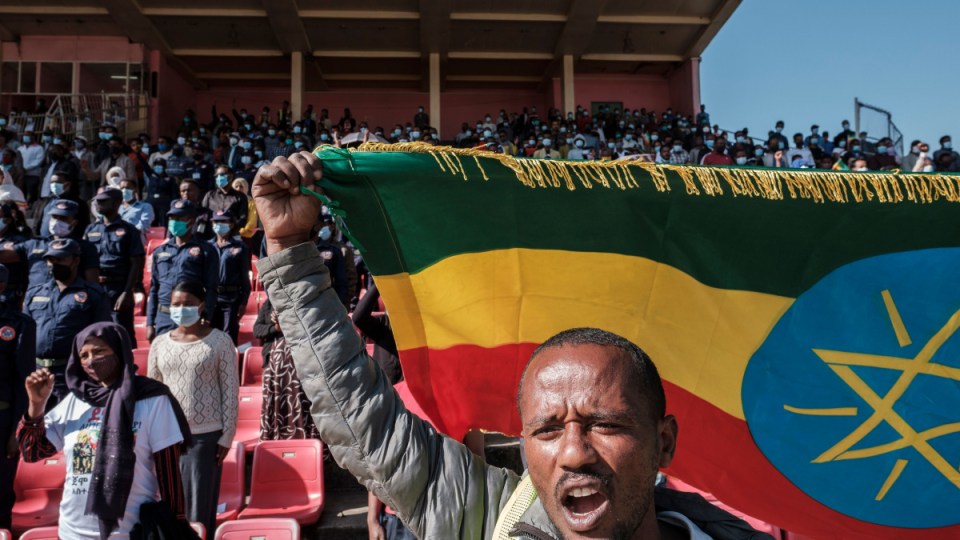 An Ethiopian man waves a flag in support of the government's efforts in Tigray. Photo: Getty

Amnesty International has confirmed reports of a massacre in northern Ethiopia where “scores and likely hundreds of people were stabbed or hacked to death”.

The victims “appear to have been day labourers in no way involved in the ongoing military offensive” in the restive Tigray region, where the township of May Cadera is located, Amnesty International director Deprose Muchena said on Thursday.

The organisation is not yet able to identify those responsible for the November 9 attack.

However, witnesses have spoken of forces loyal to the Tigray People’s Liberation Front, which governs the region and has been feuding with Prime Minister Abiy Ahmed since he came to power in 2018.

Mr Abiy said earlier the TPLF had carried out executions of government soldiers in northern Ethiopia.

He said the army had retaken the town of Shire in the Tigray region and found “bodies of troops that were tied up and executed”, adding that “the cruelty is heartbreaking”.

Mr Abiy, who made the remarks on Twitter, did not detail numbers of casualties.

Meanwhile, Ethiopia’s parliament has voted to remove the immunity from prosecution held by 39 top Tigray officials.

MPs voted to remove the immunity of politicians including regional President Debretsion Gebremichael for “bearing arms and revolting, attacking the federal army and other related crimes”.

According to the police, 242 TPLF “agents” have been arrested in Addis Ababa in the past few days for conducting “activities in support of the TPLF”. No further explanation was given.

Later on Thursday, police announced arrest warrants had been issued for 64 top officials in the TPFL and 32 of its members.

The United Nations, the African Union and the international community have expressed concern Ethiopia could descend into full-blown civil war after Mr Abiy last week ordered a curfew and sent soldiers in to put down an alleged uprising by the TPLF.

The government said earlier this week its forces had killed some 500 TPLF fighters.

Refugees from the conflict are already streaming over the border into Sudan to seek shelter, with the UN refugee agency UNHCR estimating 7000 have already arrived.

According to the UN Office for the Coordination of Humanitarian Affairs, about 200,000 internally displaced people and refugees already live in the Tigray region.

Aid workers have warned of the possibility of a humanitarian crisis in northern Ethiopia.