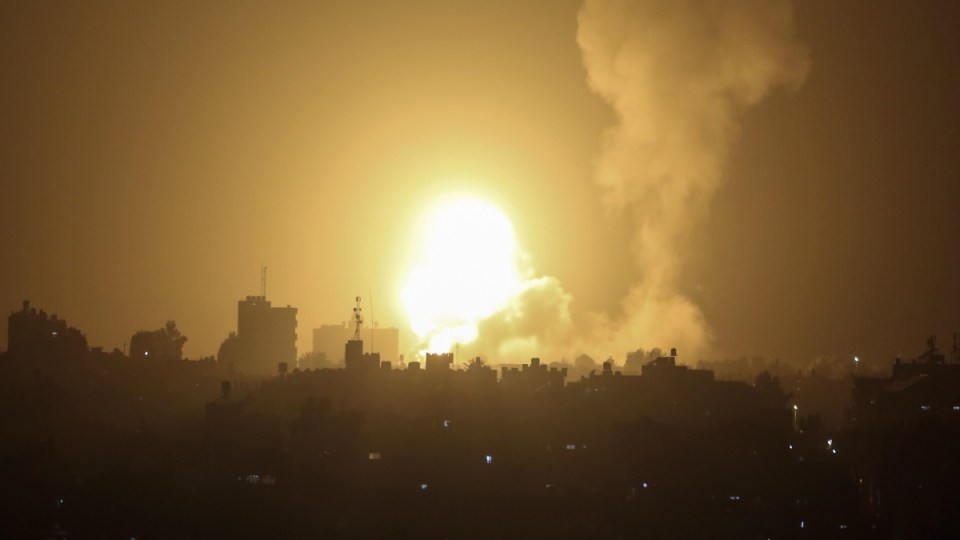 Another blast rocks the night as Israel and Hamas reignite their war after months of relative peace. Photo: AP Photo: AP

At least six people are dead, four of them children, as Israel and Islamic militants traded bombs, rockets and mutual accusations across the Gaza border on a second day of escalating violence.

Hamas, the Islamist group which controls the enclave, said the children were among the dead from a blast on Saturday close to the Jabalya refugee camp and blamed Israel.

The Israeli military denied it was responsible, saying the explosion was caused by a failed Islamic Jihad rocket launch.

It distributed a video which appeared to show a rocket being launched from Gaza at night and then veering immediately off course and plunging into a built-up area.

While the Israeli strikes went on, hitting what the military said were weapons depots hidden in residential areas and destroying a number of houses, Islamic Jihad fired rocket salvoes as far as Israel’s commercial hub Tel Aviv.

At least 24 Palestinians, including six children, have been killed and 203 wounded during the two days, according to the Gaza health ministry.

Palestinian militants fired more than 400 rockets at Israel – most of them intercepted, setting off air raid sirens and sending people running to bomb shelters. There were no reports of serious casualties, the Israeli ambulance service said.

The cross-border clash, which shattered more than a year of relative calm around Gaza, began when Israel launched a surprise attack on Friday, killing a senior Islamic Jihad commander and hitting a series of what it said were military targets.

About 2.3 million Palestinians are packed into the narrow coastal Gaza Strip, with Israel and Egypt tightly restricting movement of people and goods in and out of the enclave and imposing a naval blockade, citing security concerns.

Israel stopped the planned transport of fuel into Gaza shortly before it struck on Friday, crippling the territory’s lone power plant and reducing electricity to around eight hours per day and drawing warnings from health officials that hospitals would be severely impacted within days.

The frontier had been largely quiet since May 2021, when 11 days of fierce fighting between Israel and militants left at least 250 in Gaza and 13 in Israel dead.

United Nations and European Union Mideast envoys expressed concern about the violence and the Western-backed Palestinian Authority condemned Israel’s attacks. US Ambassador to Israel Tom Nides said on Twitter that “Israel has a right to protect itself”.

Gaza streets were largely deserted on Saturday afternoon. At the site where top Islamic Jihad commander Tayseer al-Jaabari was killed, rubble, glass and furniture were strewn along the street.

In Israel, bordertown streets were largely empty while brushfires sparked by rockets spread through nearby fields.

Islamic Jihad said it had fired a missile at Israel’s main international gateway, Ben Gurion Airport, but the rocket fell short about 20 kilometres away. The Civil Aviation Authority said the airport was operating normally.

Tensions rose this week after Israeli forces arrested an Islamic Jihad commander in the occupied West Bank, drawing threats of retaliation from the group.