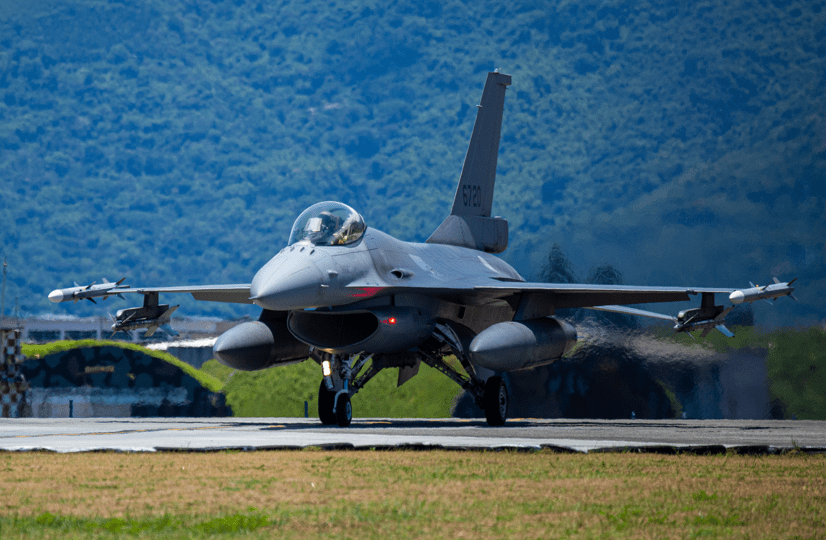 Fresh from a patrol monitoring China's border incursion, this Taiwanese F-16 waits to refuel and return to the air. Photo: Getty

Taiwanese leaders are in no doubt the ongoing demonstration of Beijing’s fury in the island’s waters and skies is both retaliation for a visit there by US House Speaker Nancy Pelosi and a dress rehearsal for an invasion.

Pelosi’s brief, unannounced visit during the week to the self-ruled island claimed by China infuriated China and has prompted unprecedented military drills that have included ballistic missiles fired over the capital, Taipei.

The Chinese exercises are scheduled to last until midday on Sunday.

Taiwan’s military believes it was part of a simulation attack on the main Taiwan island.

Taiwan’s defence ministry also said it fired flares late on Friday to warn away seven drones flying over its Kinmen islands and unidentified aircraft flying over its Matsu islands.

Pelosi arrived in Taiwan late on Tuesday, the highest-level visit to the island by a US official in decades, despite Chinese warnings, and it has promoted a flurry of retaliation, including sanctions against Pelosi herself.

Shortly after her delegation left Japan on Friday, the final stop of a week-long Asia tour, China announced it was halting dialogue with the United States in a number of areas including between theatre-level military commanders and on climate change.

On Friday, the Eastern Theatre Command of China’s People’s Liberation Army said it conducted air and sea drills to the north, southwest and east of Taiwan to test is forces’ “joint combat capabilities”.

US Secretary of State Antony Blinken said Washington had repeatedly made clear to Beijing it did not seek a crisis over Pelosi’s visit to Taiwan.

“There is no justification for this extreme, disproportionate and escalatory military response,” he told a news conference on the sidelines of regional meetings in Cambodia.

Blinken emphasised that the US would not take action to provoke a crisis but it would support allies and conduct standard air and maritime transit through the Taiwan Strait.

“We will fly, sail and operate wherever international law allows,” he said.

Taiwan has been self-ruled since 1949, when Mao Zedong’s communists took power in Beijing after defeating Chiang Kai-shek’s Kuomintang nationalists in a civil war, prompting their retreat to the island.

Beijing says its relations with Taiwan are an internal matter and that it reserves the right to bring the island under Chinese control, by force if necessary.

Taiwan: China’s intimidation offensive is a dry run for an invasion