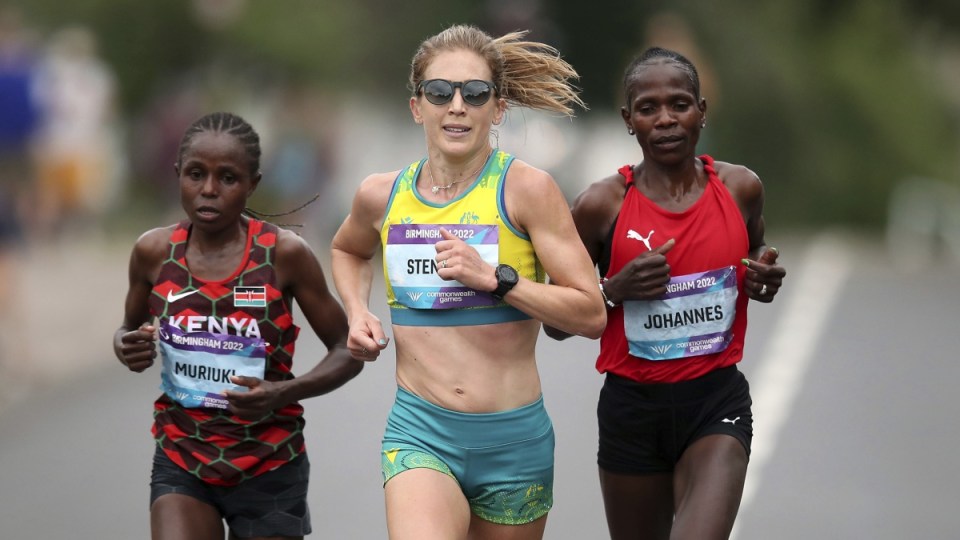 It was a day of thrills and a “terrifying” spill at the Commonweath Games in Birmingham on Saturday (local time), with an Australian mum making history in the marathon, and a dream-shattering crash in the velodrome.

Australia’s Jessica Stenson has won a history-making gold medal in the marathon after having twice won bronze in the event at the Commonwealth Games.

Drawing inspiration from her son Billy and the late Kerryn McCann, the
the 34-year-old mum dropped off all challengers one by one on the way to an incredible victory.

Stenson returned to the sport after the birth of her first child in 2019. She had previously won bronze at the Gold Coast in 2018 and Glasgow in 2014.

She crossed the line beaming with joy in a time of two hours 27 minutes 31 seconds, with Kenyan Margaret Muriuki 29 seconds adrift in second place.

It made Stenson the first female marathoner to win three Commonwealth medals.

Australian women have now won six of the 10 Commonwealth marathons.

Stenson’s triumph was the first for Australia since McCann secured the second of her two successive golds in 2006, before passing away two years later, aged 41, after a battle with cancer.

“I was thinking of Kerryn out there,” Stenson told reporters.

“I thought about Kerryn’s closing kilometres in that battle against the Kenyan woman as she entered the MCG (to win the 2006 Commonwealth title).

“All of that history really turns into strength that we can use to try and continue that history.”

She said being a mum changed how she ran.

“I’m a more relaxed runner as a mother; I can just enjoy the process a bit more,” said Stenson.

“I really wasn’t thinking about the outcome today; I was just trying to tick off each 5K and that ‘s what you do as a mum.

“You can’t think too far ahead.

“It’s just one moment at a time and you can’t control it.

“You just have to respond to what is happening and I think that gives women a lot of strength as parents.”

In the men’s marathon, Liam Adams was unlucky not to be rewarded with a podium place after a brave display of front-running.

The self-described “weekend warrior” balances running with a 40-hour work week as an electrician in Melbourne.

Adams surprised all comers when he kicked away after two kilometres and led for more than half the race.

He was overtaken by Ugandan winner Victor Kiplangat and Tanzania’s Alphonce Simbu, then couldn’t chase down bronze medallist Michael Githae.

It is the best result of Adams’ career, which has included two Olympics and three Commonwealth Games, without a shoe or clothing sponsor.

“Those guys are professionals. I’m amateur.

There was a sense of inevitability about Saturday’s marathon and, true to form, De Rozario claimed the opening event of the 2022 Games athletics competition in one hour and 56 minutes.

De Rozario is favoured to complete the T53/54 marathon/1500m double for a second straight Commonwealth Games.

Australian cyclist Matt Glaetzer’s bid for a fifth Commonwealth gold medal has been shattered by a dramatic high-speed crash.

Australia’s top sprint cyclist was lying battered and bruised on London’s Olympic velodrome track after the bad spill in the quarter-final on Saturday.

The accident left his kit torn and tattered and resulted in Brit Joe Truman needing oxygen at the side of the track before he came round from concussion.

.@AmyParks7 has an update on Matt Glaetzer and Joe Truman after their crash #B2022 pic.twitter.com/Tb2M9YVp1n

The devastating drama occurred after Maeve Plouffe, tipped as the next big Australian women’s cycling star, won a second medal in the space of 24 hours after adding the 3000m individual pursuit silver to the gold she annexed in the team event.

And following up from the track team’s hat-trick of golds on the opening day, Plouffe’s fellow pursuiter Conor Leahy also grabbed his second bronze in two days in the men’s 4000m individual event.

But the two medals were overshadowed by the crash featuring Glaetzer, who was seeking to win the keirin sprint for the third successive time.

In a clash of wheels with four riders all jockeying for position on the final circuit, Glaetzer was sent sliding and spinning to the floor but, though he looked stunned and was clearly hurt, it was Truman who suffered most.

There was loud applause in the arena when he sat up after his medical treatment and appeared to be fine.

Earlier in the dramatic session for Australia, Plouffe’s colleague Sarah Roy missed out, beaten in the 3000m bronze medal race.

Adelaide’s 23-year-old Plouffe had been thrilled on Friday to be part of the quartet which smashed the Games record en route to striking team gold and smiled afterwards that she was now after the individual title.

But Plouffe, who’d clocked the second fastest time in qualifying to set up a final against the brilliant New Zealander Bryony Botha, found the Kiwi far too strong in the showdown.

In the third-place race, 36-year-old Roy, the versatile veteran who’d finished fifth in the road race four years ago, also had to give best to Neah Evans.

Following on from Friday’s 95-18 demolition of Barbados, the Australians saw off an early challenge from the Scots on Saturday and then stepped up a gear.

Yes! Officially undefeated as we take out back to back wins on our Birmingham 2022 journey.

“We have another level to go to — we didn’t let the ball go at times and the options were on,” she said.

“Against stronger teams, we might get some hold balls.

“We’ve definitely got to learn to give the ‘ugly’ ball at times and build momentum.

“In defence our connections were better, but we can connect more as a unit.”

Australia’s next pool game is against South Africa on Monday.

A Maddison Levi hat-trick has powered Australia to a 17-12 win over New Zealand to earn the side a spot in the gold medal game in Birmingham.

Australia trailed 12-5 at halftime but Levi twice blazed down the left wing to put them ahead and then made two clutch tackles on New Zealand star Portia Woodman to deny them a try after the siren.

Victory was revenge for New Zealand’s extra-time win in the gold medal game on the Gold Coast four years ago and came after Australia were shocked 17-12 by Fiji earlier in the day.

They will play the winner of Canada and Fiji in the final on Sunday night.

Australian squash player Jess Turnbull has made her Commonwealth Games debut with a win over a Maltese opponent she plays against most weeks.

Turnbull opened her Birmingham Games account with a 3-1 round of 32 women’s singles win over Brisbane-based Colette Sultana, who is representing Malta, to continue Australia’s impressive start to the competition.

“It was tricky. She lives and plays in Brisbane, we’re very familiar, not only do we play in tournaments, we play in our weekly competition quite regularly,” Turnbull said, who followed through on her pre-Games vow to take the court with her hair dyed green and gold.

“We know each other’s games really well, so she’s really hard to play.”

HOW AUSTRALIA FARED ON DAY 2