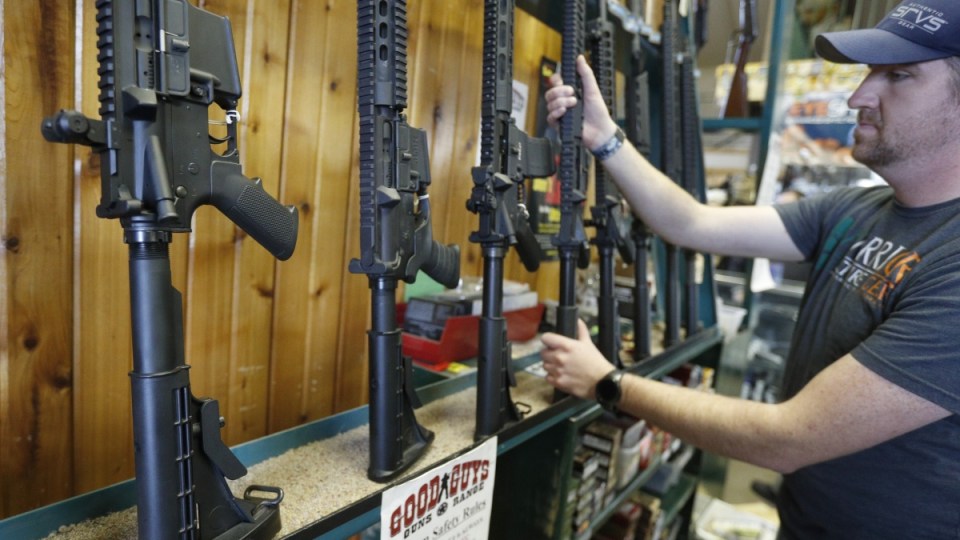 in other countries rapid-fire rifles belong to the military. In America they can be bought at the local mall. Photo: Getty Photo: Getty

The United States House of Representatives has passed legislation to revive a ban on semi-automatic guns, the first vote of its kind in years and a direct response to the firearms often used in the crush of mass shootings ripping through communities nationwide.

Once banned in the US, the high-powered firearms are widely blamed as the weapon of choice among young men responsible for many of the most devastating mass shootings.

But Congress allowed the restrictions first put in place in 1994 on the manufacture and sales of the weapons to expire a decade later, unable to muster the political support to counter the powerful gun lobby and reinstate the weapons ban.

Speaker Nancy Pelosi pushed the vote toward passage on Friday in the Democratic-run House, saying the earlier ban “saved lives”.

The House legislation is shunned by Republicans, who dismissed it as an election-year strategy by Democrats. Almost all Republicans voted against the bill, which passed 217-213. It will likely stall in the 50-50 Senate.

The bill comes at a time of intensifying concerns about gun violence and shootings — the supermarket shooting in Buffalo, New York; massacre of school children in Uvalde, Texas; and the July Fourth shootings of revellers in Highland Park, Illinois.

Voters seem to be taking such election-year votes seriously as Congress splits along party lines and lawmakers are forced to go on the record with their views. A recent vote to protect same-sex marriages from potential Supreme Court legal challenges won a surprising amount of bipartisan support.

President Joe Biden, who was instrumental in helping secure the first semi-automatic weapons ban as a senator in 1994, encouraged passage, promising to sign the bill if it reached his desk.

In a statement before the vote, his administration said “We know an assault weapons and large-capacity magazine ban will save lives.”

The Biden administration said for 10 years while the ban was in place, mass shootings declined.

“When the ban expired in 2004, mass shootings tripled,” the statement said.

Republicans stood firmly against limits on ownership of the high-powered firearms during an at times emotional debate ahead of voting.

Democrats argued that the ban on the weapons makes sense, portraying Republicans as extreme and out of step with Americans.

Pelosi displayed a poster of a gun company’s advertisement for children’s weapons, smaller versions that resemble the popular AR-15 rifles and are marketed with cartoon-like characters. “Disgusting,” she said.

The bill would make it unlawful to import, sell or manufacture a long list of semi-automatic weapons.

For nearly two decades, since the previous ban expired Democrats had been reluctant to revisit the issue and confront the gun lobby.

But voter opinions appear to be shifting and Democrats dared to act before the autumn election. The outcome will provide information for voters of where the candidates stand on the issue.

Putin warns of ‘large-scale catastrophe’ and agrees inspectors should visit Ukraine nuclear plant
‘It’s been a minute’: Will Smith speaks out for the first time since the slap
Today's Stories