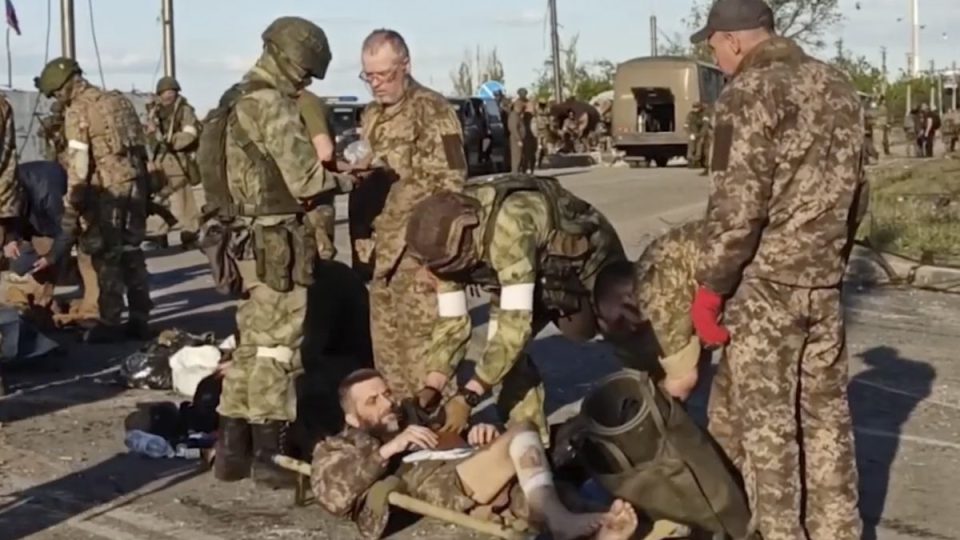 At least 40 Ukrainian prisoners of war captured during the fighting for Mariupol have been killed by Ukrainian shelling, according to Moscow’s defence ministry – a claim fiercely disputed by authorities in Kyiv, who have accused Russia of mass murder.

“A missile strike from the US-made multiple launch rocket system (HIMARS) was carried out on a pre-trial detention centre in the area of the settlement of Olenivka, where Ukrainian military prisoners of war, including fighters from the Azov battalion, are being held,” Russia’s  defence ministry said in its daily briefing.

The ministry said 75 PoWs were wounded in the attack on Friday, but Daniil Bezsonov, a spokesman for the Russia-backed separatists in the Donetsk region, put the number at 130.

Ukraine’s military denied carrying out the attack and blamed it on Russian forces.

“The armed forces of the Russian Federation carried out targeted artillery shelling of a correctional institution in the settlement of Olenivka, Donetsk oblast, where Ukrainian prisoners were also held,” the General Staff of the Ukrainian Armed Forces said in a statement.

“In this way, the Russian occupiers pursued their criminal goals: to accuse Ukraine of committing ‘war crimes’, as well as to hide the torture of prisoners and executions …”

The Ukrainian troops were taken prisoner after the fierce fighting for Ukraine’s Azov Sea port of Mariupol, where they holed up at the giant Azovstal steel mill for months.

The Azov Regiment and other Ukrainian units defended the steel mill for nearly three months, clinging to its underground maze of tunnels.

They surrendered in May under relentless Russian attacks from the ground, sea and air.

Scores of Ukrainian soldiers were then taken to prisons in Russian-controlled areas such as the Donetsk region, a breakaway area in eastern Ukraine that is run by Russia-backed separatist authorities.

Victoria 2026: What to expect from the next Commonwealth Games
Govts ramp up user info demands: Twitter
Today's Stories