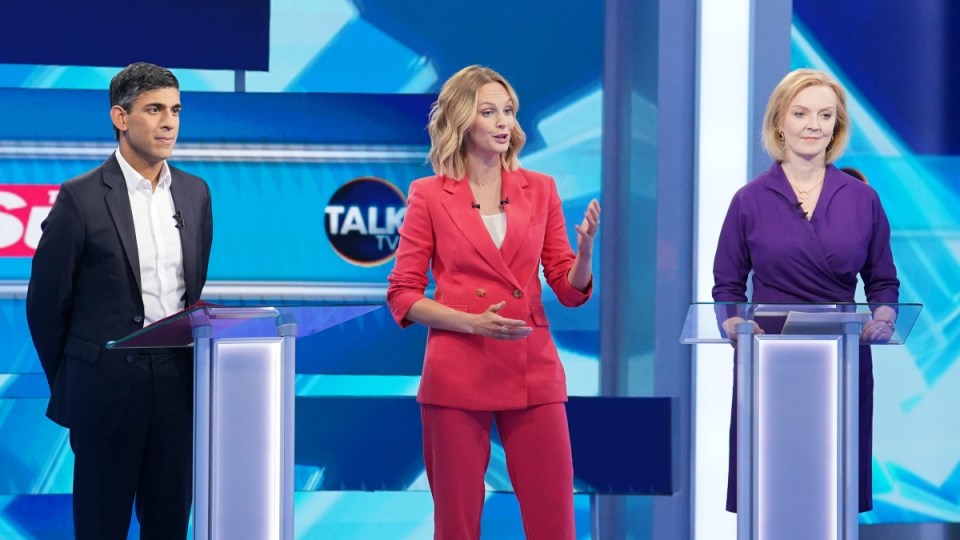 A live debate between the two candidates vying to succeed Boris Johnson as UK prime minister has come to a dramatic end when the presenter fainted.

Foreign Secretary Liz Truss, the bookmakers’ favourite to win the Conservative Party leadership election, and former finance minister Rishi Sunak were sparring over their plans when there was a loud crash in the studio.

The debate, which was being hosted by Talk TV and the Sun newspaper and broadcast live, cut away with Truss looking visibly concerned.

“Although she is fine, the medical advice was that we shouldn’t continue with the debate. We apologise to our viewers and listeners,” Talk TV said on Twitter.

“Relieved to hear @KateEMcCann is fine. Really sorry that such a good debate had to end,” Truss said.

The broadcast had briefly resumed showing the two candidates talking to a small audience in the studio, although there was no sound.

Before the premature end, Truss and Sunak had again clashed over their tax and spending plans, and what they would do to address a cost of living crisis.

Truss says Sunak’s emphasis on balancing the government’s books and raising tax on business would tip the economy into recession.

“I do think it is morally wrong at this moment when families are struggling to pay for their food, that we have put up taxes on ordinary people when we said we wouldn’t in our manifesto and when we didn’t need to do so,” Truss said.

Sunak, whose resignation from government earlier this month set in motion Johnson’s downfall, argued that money from tax rises he brought in was necessary to pay for extra spending on healthcare.

“I think what’s morally wrong is asking our children and grandchildren to pick up the tab for the bills that we’re not prepared to meet,” Sunak said.

Tuesday’s debate was the second head-to-head tussle between the two contenders.

A YouGov poll of Conservative Party members, who will ultimately decide on the next leader, indicated 50 per cent thought Truss performed the best in the first clash on Monday, with 39 per cent backing Sunak.

They also saw Truss as more in touch with ordinary people, more likeable and more trustworthy.

Sunak narrowly edged her by 43 per cent to 42 per cent on who was the most prime ministerial.

The winner of the election, which will be decided by a ballot of the fewer than 200,000 Conservative members, will be announced on September 5.

Victoria 2026: What to expect from the next Commonwealth Games
Australia’s top scientist warns of seven ‘megatrends’
Today's Stories