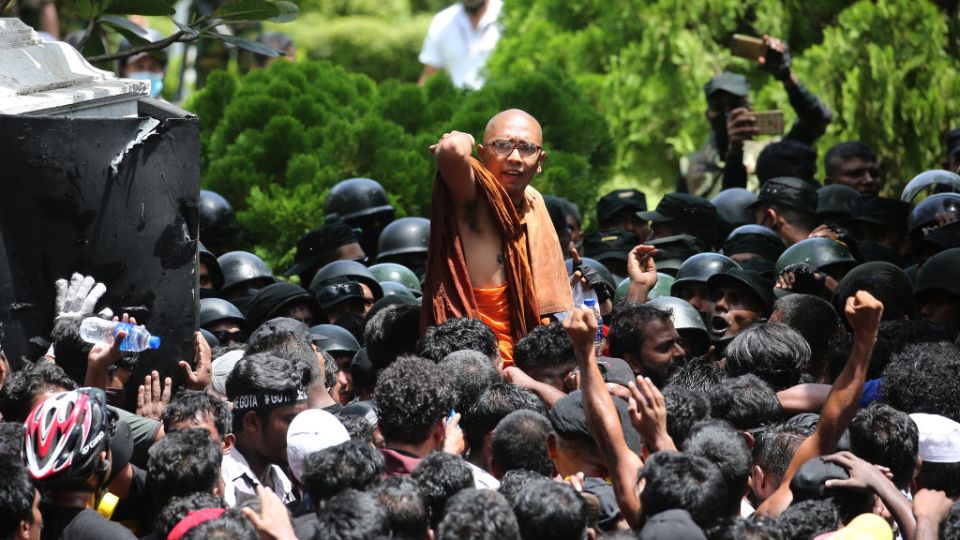 Broke, hungry and fed up, protesters storm the seat of power in Colombo. Photo: Getty

Addressing his country in a letter from Singapore, where he fled after a brief stop in the Seychelles, Gotabaya Rajapaksa inisted he took “all possible steps” to avert the crisis that has engulfed the island nation.

Rajapaksa’s resignation was accepted by parliament on Friday.

He fled the country after hundreds of thousands of anti-government protesters took to the the streets of Colombo a week ago and occupied his official residence and offices.

Sri Lanka’s parliament met on Saturday to begin the process of electing a new president, as a shipment of fuel arrived to provide some relief to the crisis-hit nation.

During the proceedings Dhammika Dasanayake, the secretary-general of Sri Lanka’s parliament, read out Rajapaksa’s resignation letter, the contents of which have not previously been made public.

In his letter, Rajapaksa says Sri Lanka’s financial crisis is rooted in years of economic mismanagement that pre-dated his presidency, along with the COVID-19 pandemic that drastically reduced Sri Lanka’s tourist arrivals and remittances from foreign workers.

“It is my personal belief that I took all possible steps to address this crisis, including inviting parliamentarians to form an all-party or unity government,” the letter says.

Parliament will next meet on Tuesday to accept nominations for the post of the president. A vote to decide the country’s leader is set to take place on Wednesday.

Six-time prime minister Ranil Wickremesinghe, an ally of the Rajapaksas who is the sole representative of his party in parliament, has been sworn in as acting president until then.

Wickremesinghe, who protesters also want gone, was selected as the ruling party’s candidate for president on Friday, leading to the prospect of further unrest should he be elected.

More than 100 police and security personnel with assault rifles were deployed on the approach road to parliament on Saturday, manning barricades and a water cannon to prevent any unrest.

Columns of security forces patrolled another approach road to parliament, though there were no signs of any protesters.

Street protests over Sri Lanka’s economic meltdown simmered for months before boiling over on July 9, with protesters blaming the Rajapaksa family and allies for runaway inflation, shortages of basic goods, and corruption.

Days-long fuel queues have become the norm in the island nation of 22 million, while foreign exchange reserves have dwindled to close to zero and headline inflation hit 54.6 per cent last month.

Sri Lanka received the first of three fuel shipments on Saturday, Energy Minister Kanchana Wijesekera said. These are the first shipments to reach the country in about three weeks.