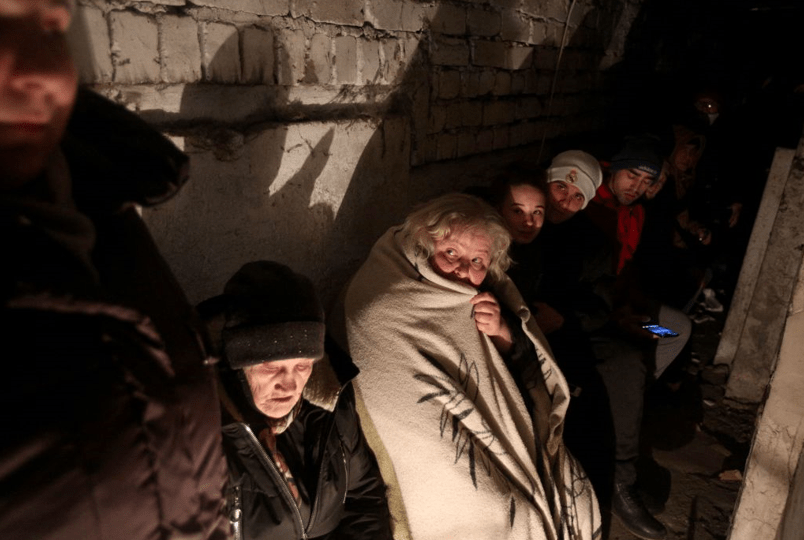 An old woman shivers beneath her blanket with other refugees from the Russian blitz pulverising their Sievierodonetsk home. Photo: Getty

“As soon as we have enough Western long-range weapons, we will push their artillery away from our positions. And then, believe me, the Russian infantry, they will just run,” Sergiy Gaidai, governor of Luhansk province

Ukraine authorities say troops have recaptured at least 20 per cent of the factory city, which has been the focus of an intense offensive in Moscow’s drive to take the entire eastern Donbas region.

Gaidai, governor of Luhansk province, told Ukraine national television that troops have retaken 20 per cent of the territory lost in in recent weeks and were not consiodering retreat or withdrawal.

It was “not realistic” that the city would fall in the next two weeks even though Russian reinforcements were being deployed, he added.

Reuters reached Sievierodonetsk on Thursday and was able to verify that Ukrainians still held part of the city.

Ukraine’s military said on Saturday Russia had reinforced its troops and used artillery to conduct “assault operations” in the city.

But it said Russian forces had retreated after failed attempts to advance in the nearby town of Bakhmut and cut off access to Sievierodonetsk.

Gaidai said in a social media post that four people were killed in Russian attacks in the region on Saturday, including a mother and a child.

The war in Ukraine marked its 100th day on Friday. Tens of thousands have died, millions have been uprooted from their homes and the global economy disrupted since Moscow’s forces were driven back from Kyiv in the first weeks of the conflict.

“We are now seeing attempts to shift the responsibility for what is happening on the world food market, the emerging problems in this market, onto Russia,” he said on national television.

He said the best solution would be for Western sanctions on Russia’s ally Belarus to be lifted and for Ukraine to export grain through that country.

Ukrainian officials are counting on advanced missile systems that the United States and Britain recently pledged to swing the war in their favour, and Ukrainian troops have already begun training on them.

While Ukraine’s resistance has forced Putin to narrow his immediate goal to conquering the entire Donbas region, Ukrainian officials said he remains intent on subduing the whole country.

Russia vows to plough ahead

“Putin’s main goal is the destruction of Ukraine. He is not backing down from his goals, despite the fact that Ukraine won the first stage of this full-scale war,” Ukrainian Deputy Defence Minister Hanna Malyar told national television on Friday.

A Russian government spokesman said “certain results have been achieved” in the war and Moscow will continue its military operations until all goals are met.

Two Reuters journalists were injured and a driver killed on Friday after their vehicle came under fire as they tried to reach Sievierodonetsk from an area controlled by Russian-backed separatists.

Russian soldiers also attempted to advance towards Lysychansk, across the Siverskyi Donets River from Sievierodonetsk, but were stopped, Ukraine’s military general staff said.