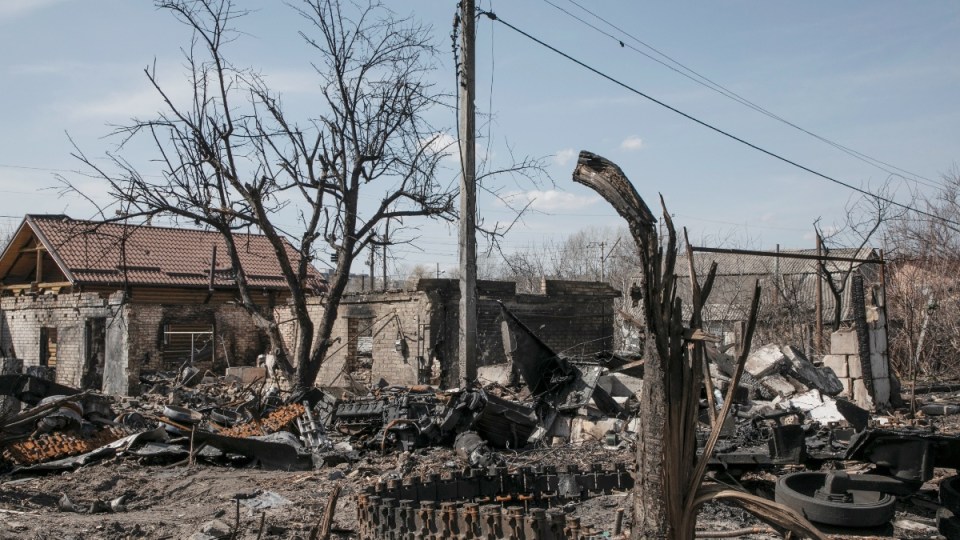 Russian forces are seeking to encircle enemy troops in twin eastern cities as Ukraine’s President Volodymyr Zelensky warns Moscow is planning to destroy the industrial Donbas region where it has focused its attacks.

Russia is attempting to seize the separatist-claimed Donbas’ two provinces, Donetsk and Luhansk, and trap Ukrainian forces in a pocket on the main eastern front.

“The situation in Donbas is extremely difficult. All the remaining strength of the Russian army is now concentrated on this region,” Mr Zelensky said in a late Tuesday address.

“The occupiers want to destroy everything there.”

The easternmost part of the Ukrainian-held Donbas pocket, the city of Sievierodonetsk on the east bank of the Siverskiy Donets River and its twin Lysychansk on the west bank, have become a pivotal battlefield, with Russian forces advancing from three directions to encircle them.

“The enemy has focused its efforts on carrying out an offensive in order to encircle Lysychansk and Sievierodonetsk,” said Serhiy Gaidai, governor of Luhansk province, where the two cities are among the last territory held by Ukraine.

Ukraine’s military said it had repelled nine Russian attacks on Tuesday in the Donbas – where at least 14 civilians had been killed – using aircraft, rocket launchers, artillery, tanks, mortars and missiles.

Reuters could not immediately verify the information.

In a sign of Ukrainian success elsewhere, authorities in its second-largest city, Kharkiv, re-opened the underground metro, where thousands of civilians had sheltered for months under relentless bombardment.

The re-opening came after Ukraine pushed Russian forces largely out of artillery range of the northern city, as they did from the capital, Kyiv in March.

Three months into the invasion, Russia still has only limited gains to show for its worst military losses in decades, while much of Ukraine has suffered devastation in the biggest attack on a European state since 1945.

More than 6.5 million people have fled abroad, thousands have been killed and cities reduced to rubble.

The war has also caused growing food shortages and soaring prices due to sanctions and disruption of supply chains. Ukraine and Russia are major exporters of grain and other commodities.

Jailed Russian opposition leader Alexei Navalny on Tuesday lambasted President Vladimir Putin, casting the Kremlin chief as a doomed madman who was butchering the people of Ukraine and Russia.

“This is a stupid war which your Putin started,” Mr Navalny told an appeals court in Moscow via video link from a corrective penal colony.

“This war was built on lies.”

Meanwhile, in a decision that could push Russia closer to the brink of default, the Biden administration announced it would not extend a waiver set to expire on Wednesday that enabled Russia to pay US bondholders.

Russia had been allowed to keep paying interest and principal to avert default on its government debt.

Russian politicians gave the first stamp of approval to a bill that would allow businesses to take over foreign companies that have left the country in opposition to Moscow’s actions in Ukraine, a government online portal showed.

Senior Russian officials suggested in comments on Tuesday the war, which Russia calls a “special operation”, may be drawn-out.

Nikolai Patrushev, head of Mr Putin’s security council, said Russia would fight as long as necessary to eradicate “Nazism” in Ukraine, a justification for the war the West calls baseless.

The Donbas fighting follows Russia’s biggest victory in months: the surrender last week of Ukraine’s garrison in the port of Mariupol after a siege in which Kyiv believes tens of thousands of civilians were killed.

Petro Andryushchenko, an aide to Mariupol’s Ukrainian mayor now operating outside the city, said dead bodies were being found in the rubble.

About 200 decomposing bodies were buried in debris in a basement of one high-rise building, he said.