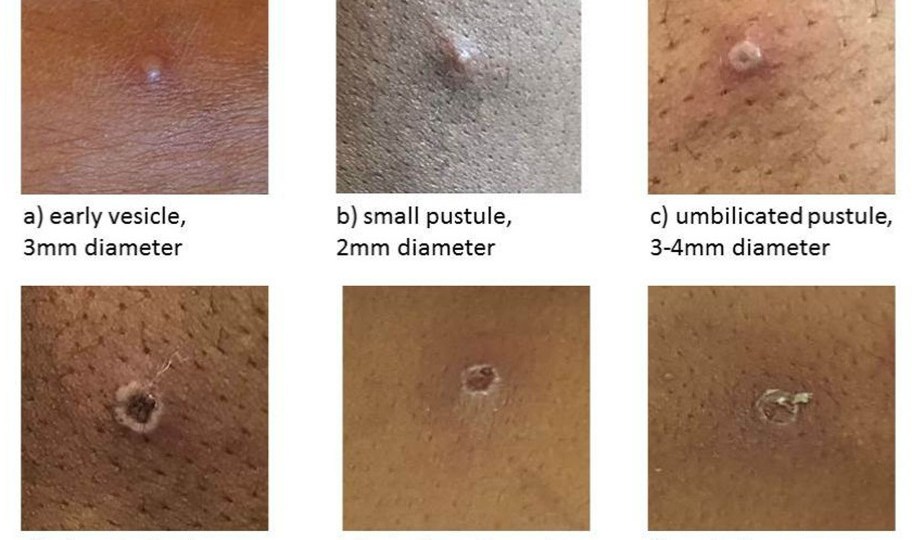 The six stages of a monkeypox rash. Photo: AAP

People in Switzerland, Austria and Israel are suffering from monkeypox, including a man who was taken to a Vienna hospital with sores across his face.

More than 100 confirmed and suspected cases have been reported around the world so far – including in Australia.

Experts believe it’s possible the virus was previously present in countries where it was not endemic but that it did not spread far because of lockdowns and social-distancing rules during the coronavirus pandemic.

The Australian cases are a man in his 40s in NSW and another man in his 30s in Victoria. Both men had recently travelled to Europe.

Hearing about another strange illness spreading has no doubt caused some concern yet it’s important to note that the World Health Organisation has urged calm as monkeypox does not spread as easily as a virus like COVID-19.

Evidence so far suggests monkeypox, a viral zoonatic disease, is most likely transmitted during very close contact such as during sex, between parents and children, between patients and carers or when people share linen.

If you want to know more about what experts know about monkeypox, the signs to watch and how to protect yourself, read The New Daily‘s helpful explainer here.

Read on for the latest on the cases detected in Europe and how health leaders are working to limit the spread of the virus.

The latest confirmed case is a 35-year-old who was taken to an isolation ward in an Austrian hospital early on Monday morning (Australian time).

Switzerland also announced over the weekend that a traveller who arrived home to the canton of Bern had become ill with monkeypox.

“As far as is known, the affected person came into contact with the virus abroad,” local officials said in a statement.

“The sick person is receiving outpatient treatment and is in isolation at home. All contact persons have been informed by contact tracing.”

In Israel, a spokesman for Tel Aviv’s Ichilov Hospital told Agence France-Presse that a 30-year-old man had tested positive for the virus.

He had recently returned from western Europe.

The WHO expects to identify more cases of monkeypox as it expands surveillance in countries where the disease is not typically found.

“Available information suggests that human-to-human transmission is occurring among people in close physical contact with cases who are symptomatic”, the agency added.

Monkeypox is an infectious disease that is usually mild, and is endemic in parts of west and central Africa.

“What seems to be happening now is that it has got into the population as a sexual form, as a genital form, and is being spread as are sexually transmitted infections, which has amplified its transmission around the world,” WHO official David Heymann, an infectious disease specialist, told Reuters.

Professor Heymann said an international committee of experts met via video conference to look at what needed to be studied about the outbreak and communicated to the public, including whether there is any asymptomatic spread, who are at most risk, and the various routes of transmission.

He said the meeting was convened “because of the urgency of the situation”.

He said close contact was the key transmission route, as lesions typical of the disease are very infectious.

Early genomic sequencing of a handful of the cases in Europe has suggested a similarity with the strain that spread in a limited fashion in Britain, Israel and Singapore in 2018.

Proffesor Heymann said it was “biologically plausible” the virus had been circulating outside of the countries where it is endemic, but had not led to major outbreaks as a result of COVID-19 lockdowns, social distancing and travel restrictions.

He stressed that the monkeypox outbreak did not resemble the early days of the COVID-19 pandemic because it does not transmit as easily.

Those who suspect they may have been exposed or who show symptoms including bumpy rash and fever should avoid close contact with others, he said.

“There are vaccines available, but the most important message is, you can protect yourself,” he added.