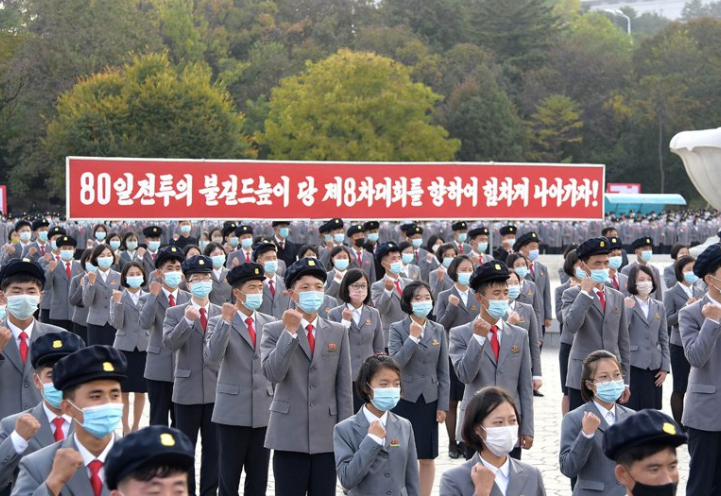 North koreans have been in masks for more than two years but the virus paid no attention. Photo: Twitter/Comrade Natalie

After suppressing all news of its COVID infections for two years, North Korea is now conceding the coronavirus is raging throughout the country.

The Pyongyang regime has reported 21 new deaths and 174,440 more people with fever symptoms as the country scrambles to slow the spread of the virus across its largely unvaccinated population.

The deaths and cases, which rweflect the situation as of Friday, increase total numbers to 27 deaths and 524,440 illnesses amid a rapid spread of fever since late April.

North Korea on Saturday said 243,630 people had recovered and 280,810 remained in quarantine. State media did not specify how many of the fever cases and deaths were confirmed as COVID-19 infections.

The country imposed nationwide lockdowns on Thursday after confirming its first COVID-19 cases since the start of the pandemic.

North Korean leader Kim Jong-un during a meeting on anti-virus strategies on Saturday described the outbreak as a historically “huge disruption” and called for unity between the government and people to stabilise the outbreak as quickly as possible.

Experts say a failure to control the spread of COVID-19 could have devastating consequences in North Korea, considering the country’s poor health system and that its 26 million people are largely unvaccinated.

State media said tests of virus samples collected on Sunday from an unspecified number of people with fevers in the country’s capital, Pyongyang, confirmed they were infected with the omicron variant.

The country has officially confirmed one death as linked to an Omicron infection.

The viral spread could have been accelerated after an estimated tens of thousands of civilians and troops gathered for a massive military parade in Pyongyang on April 25, where Kim took centre stage and showcased the most powerful missiles of his military nuclear program.

‘What a hit’: Albanese on attack after dire wages data
COVID jabs being evaluated for infants as young as six months
Today's Stories